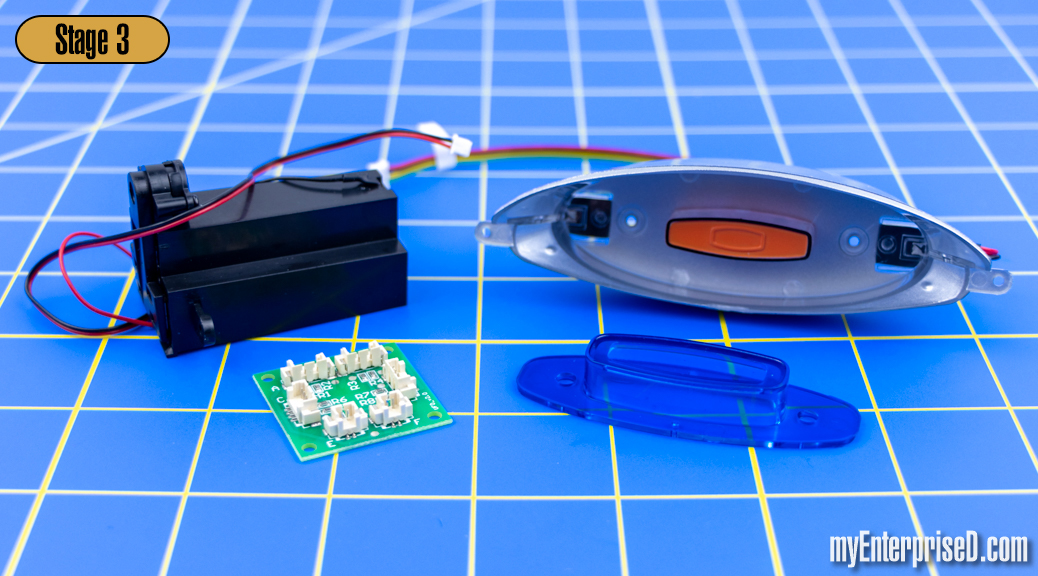 “In this phase of the assembly, you assemble the main deflector as well as attaching it and the bridge to the battery as your U.S.S. Enterprise NCC-1701-D lights up for the first time.” 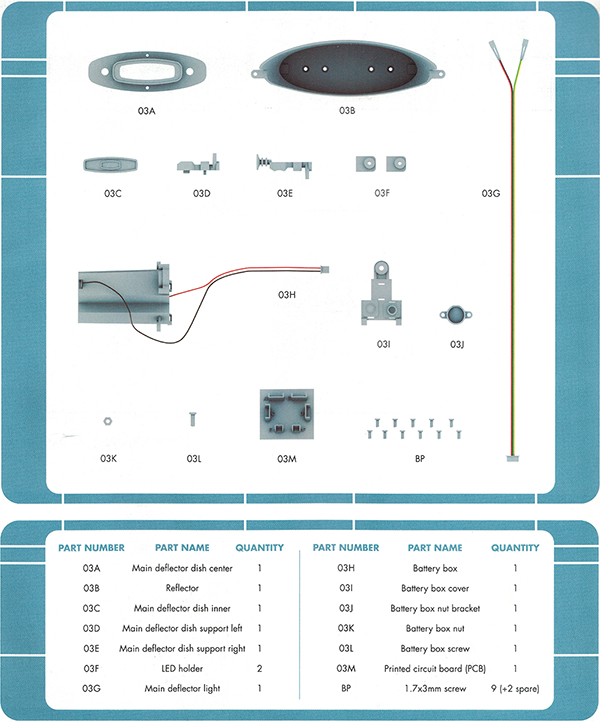 Materials: Everything non-electronic in this stage is plastic. 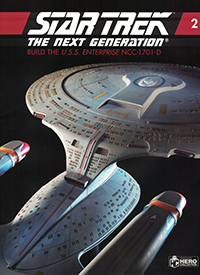 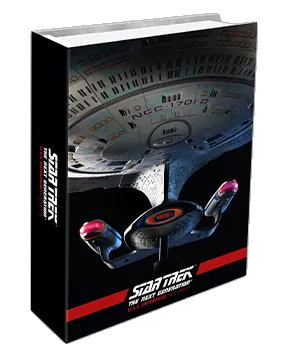 Be gentle with the solder joints of this Battery Box as the wires are very thin and could break off: 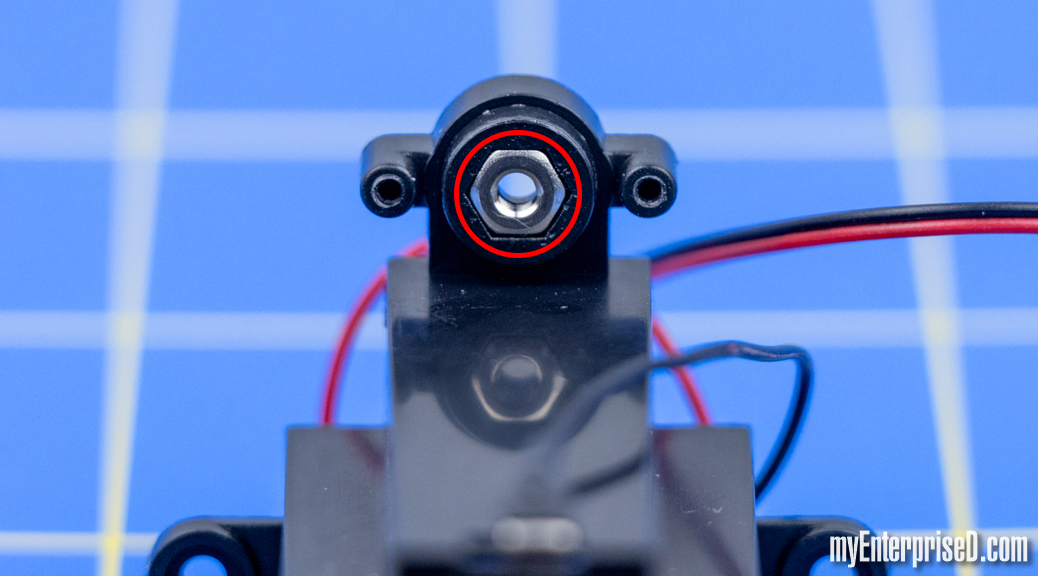 Fit the Battery Box Nut Bracket over the hexagonal hole as shown and secure it into place with two (2) BP screws.

NOTE: The instructions have a misprint here, saying to use BM screws (which are not supplied). This is plastic, so it uses BP screws instead: 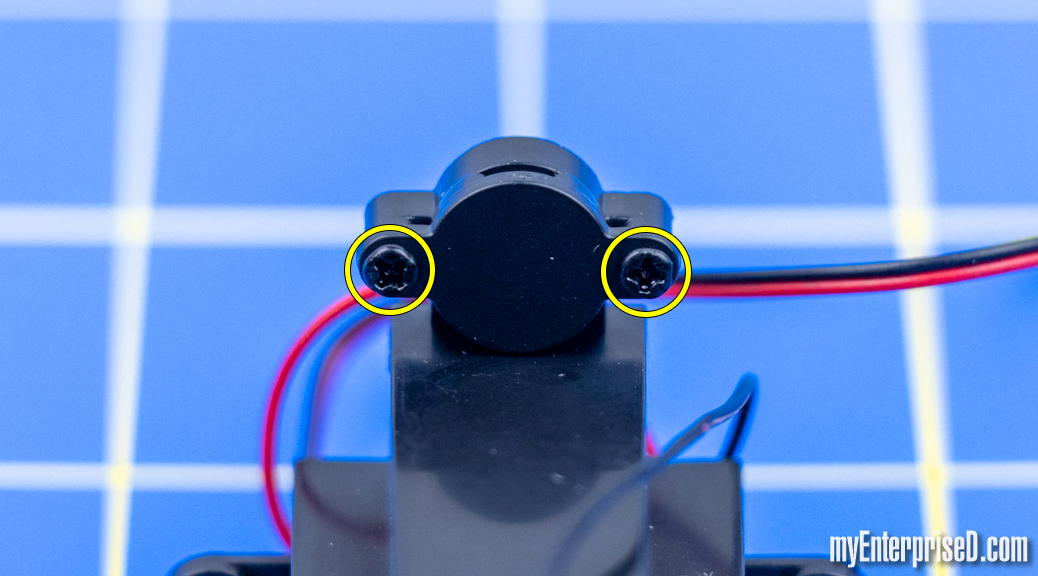 Slide three (3) AAA batteries into the Battery Box, noting the polarity of each as shown: 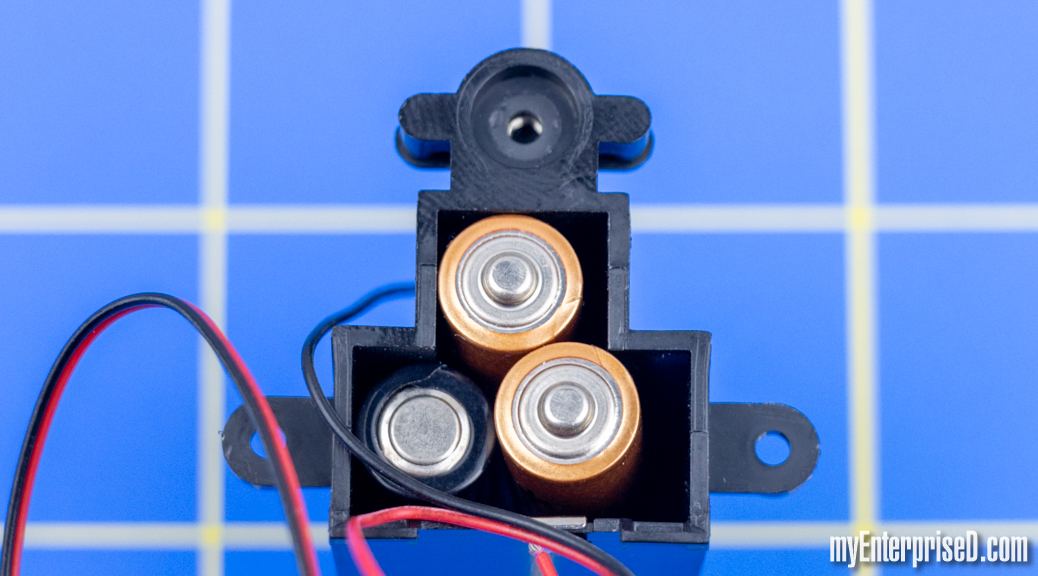 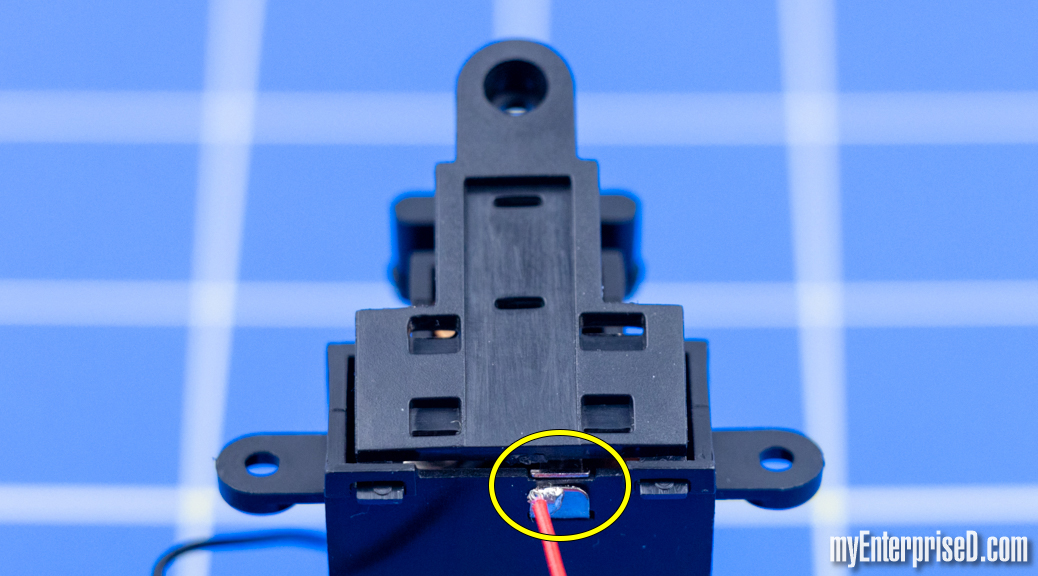 Secure this closed with the Battery Box Screw: 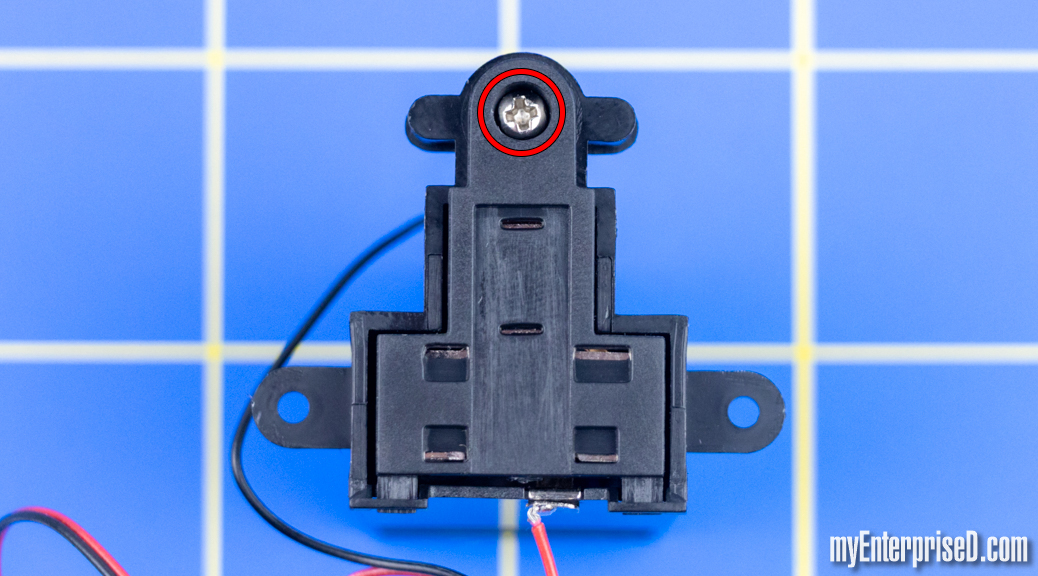 Mate the Main Deflector Dish Supports Left and Right to each other as shown: 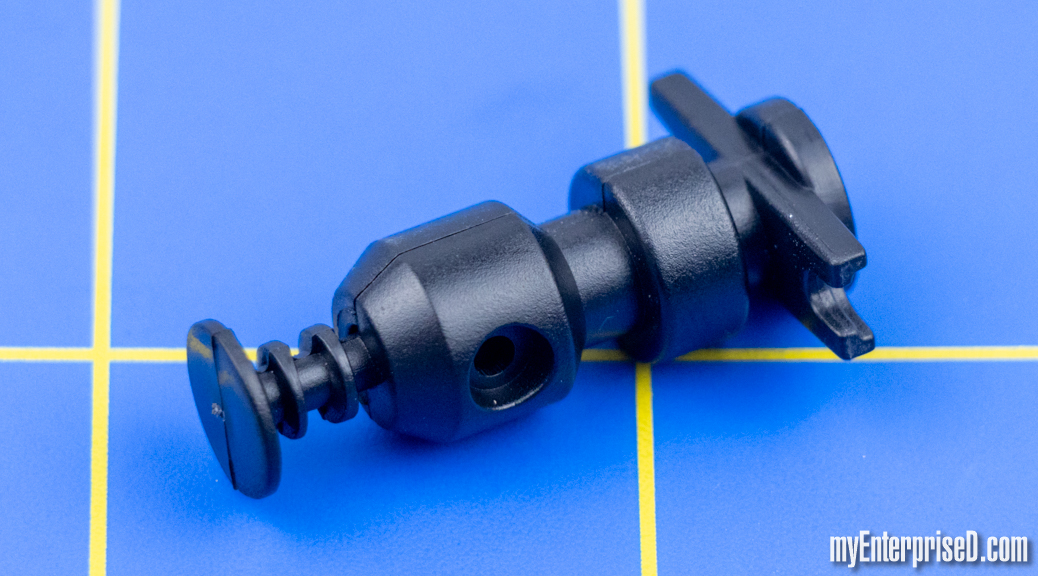 Secure these halves together with one (1) BP screw.

This screw is short, so do not over-tighten this screw as you may strip it out. If that happens, use one of your spare AP screw from the previous stages: 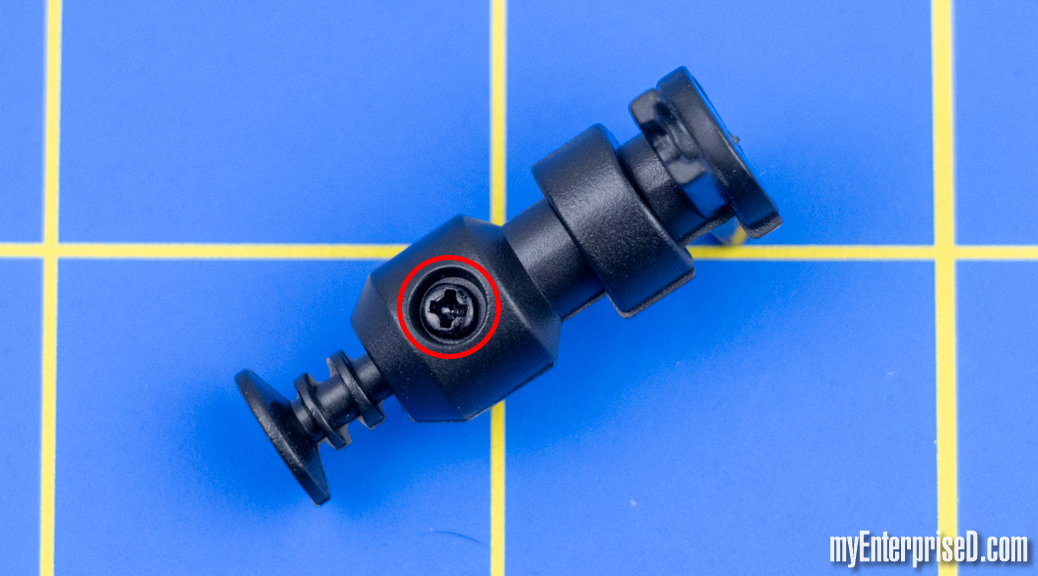 Fit the two posts of the Main Deflector Dish Inner inside the Reflector as shown, matching up to the screw holes behind it.

There is no up or down on the Main Deflector Dish Inner – it fits either way: 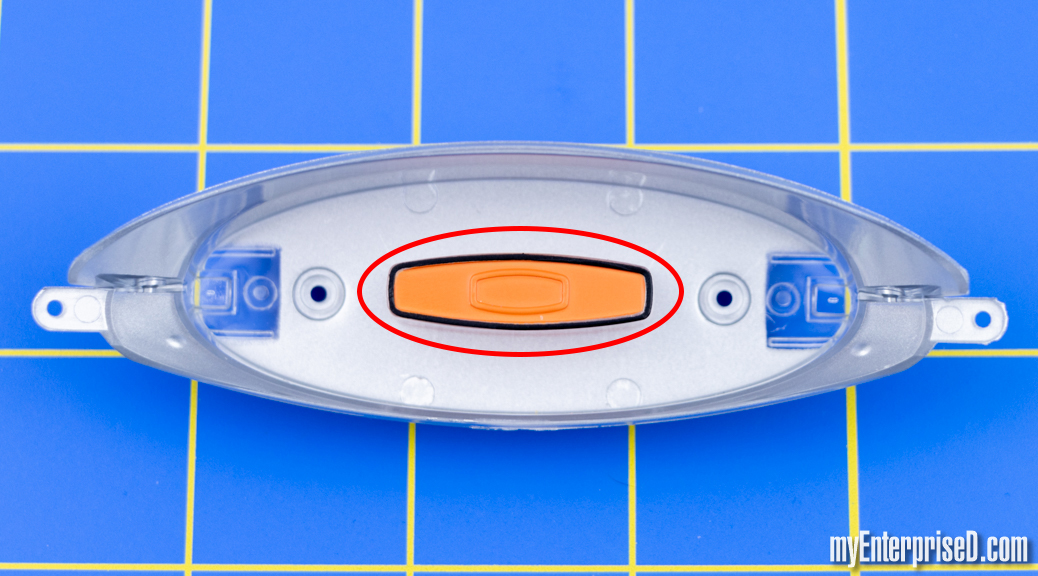 Secure the Main Deflector Dish Inner from behind with two (2) BP screws: 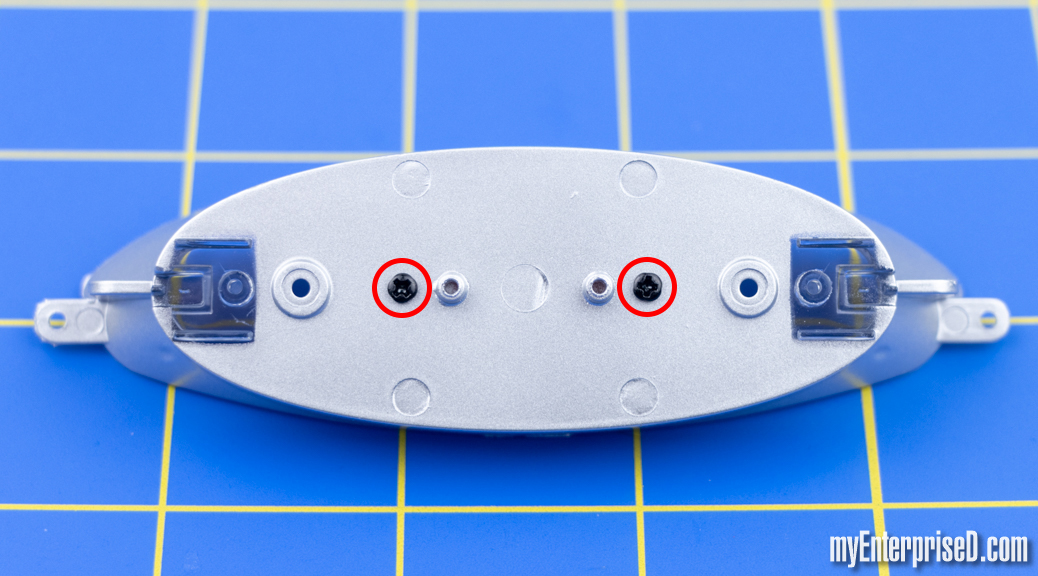 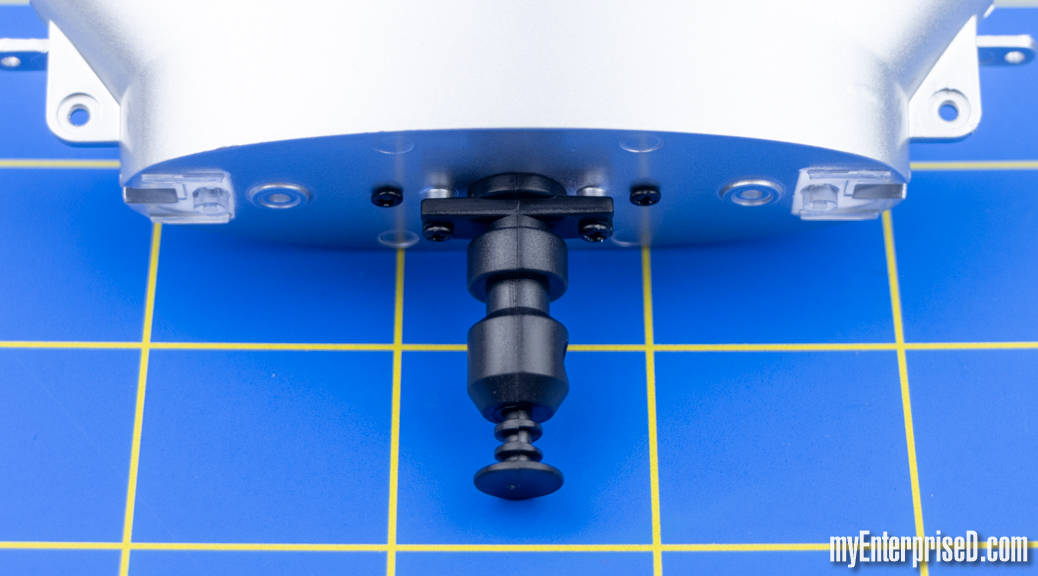 … and secure it into place with two (2) BP screws, as shown: 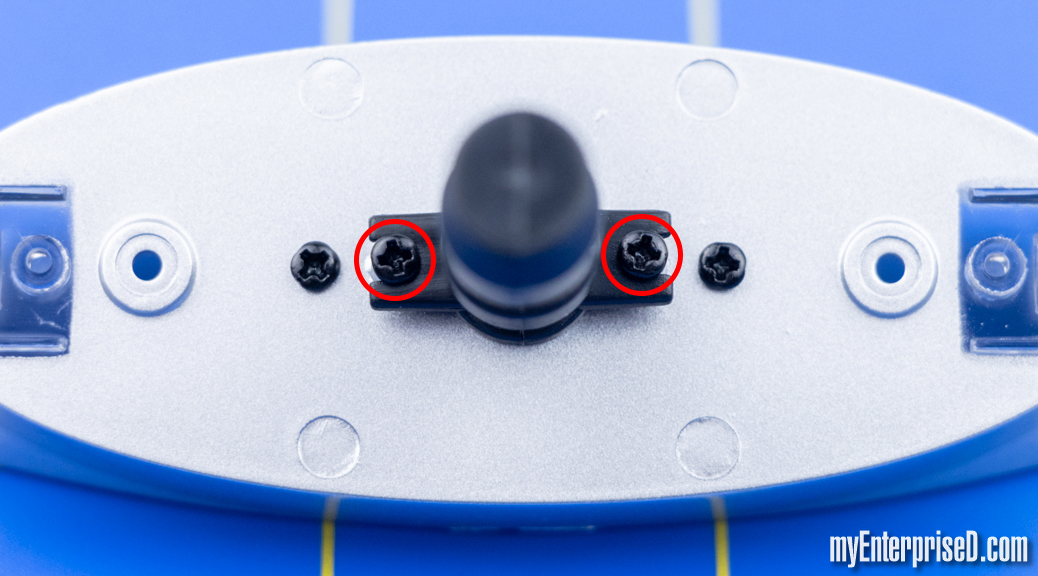 Fit the LED on the end of the yellow/green wires of the Main Deflector Light cable (marked ‘D’) into this matching notch on the back of the Reflector: 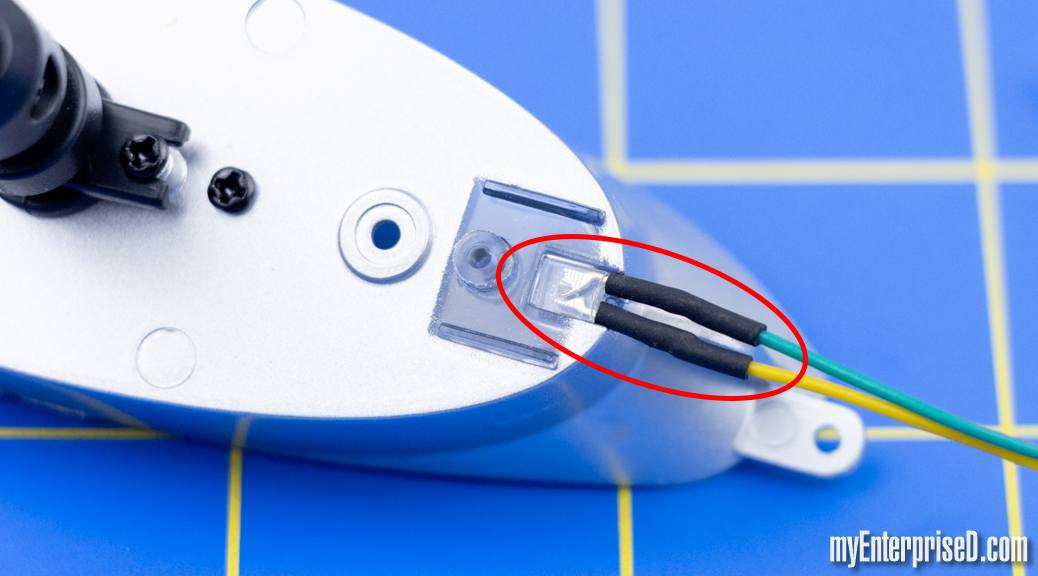 Cover this LED with one of the LED Holders and secure it down with one (1) BP screw, as shown: 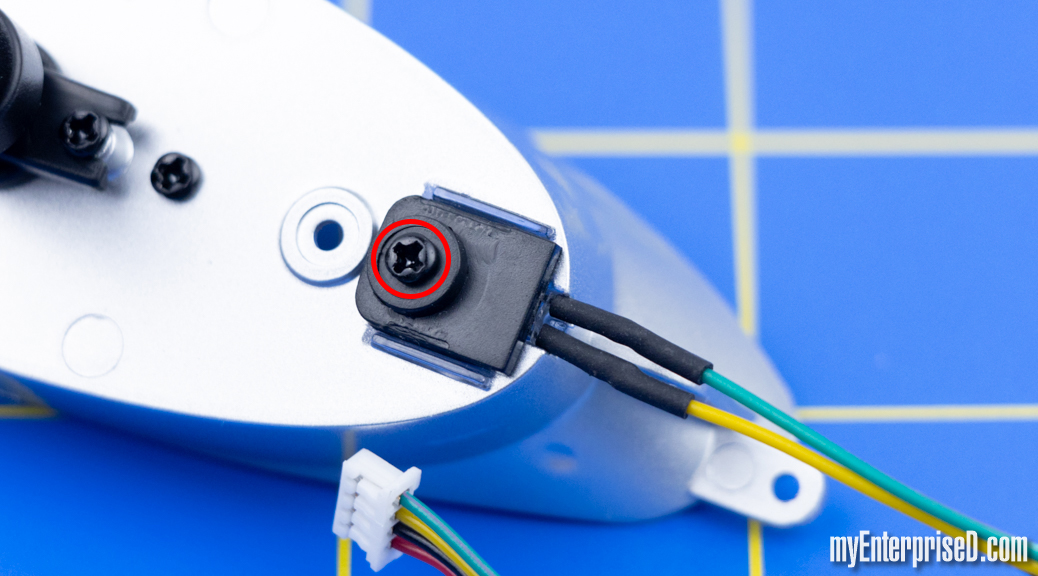 Repeat this process with the other LED on the Main Deflector Light cable using the remaining LED Holder and one (1) more BP screw: 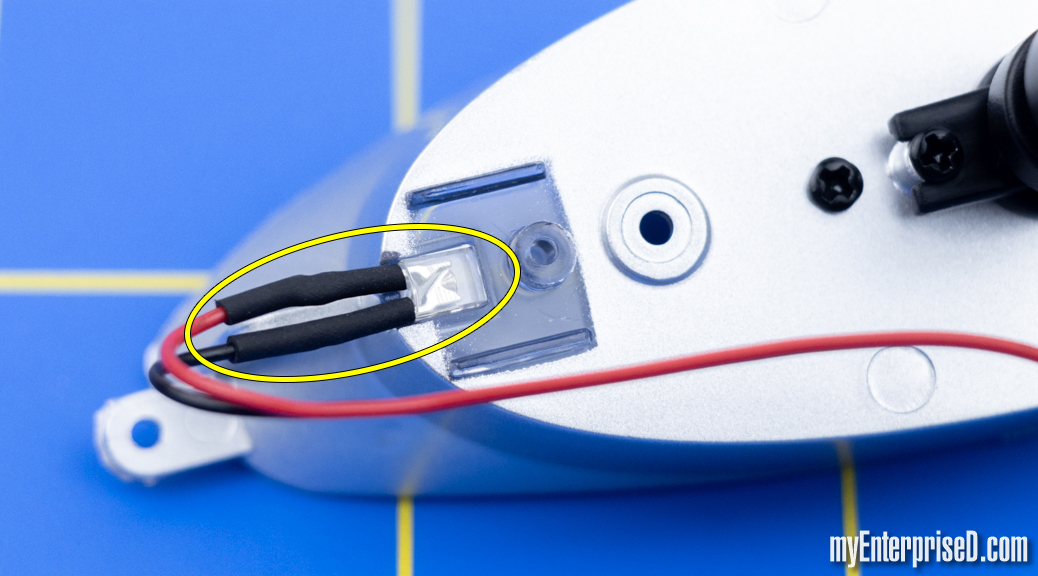 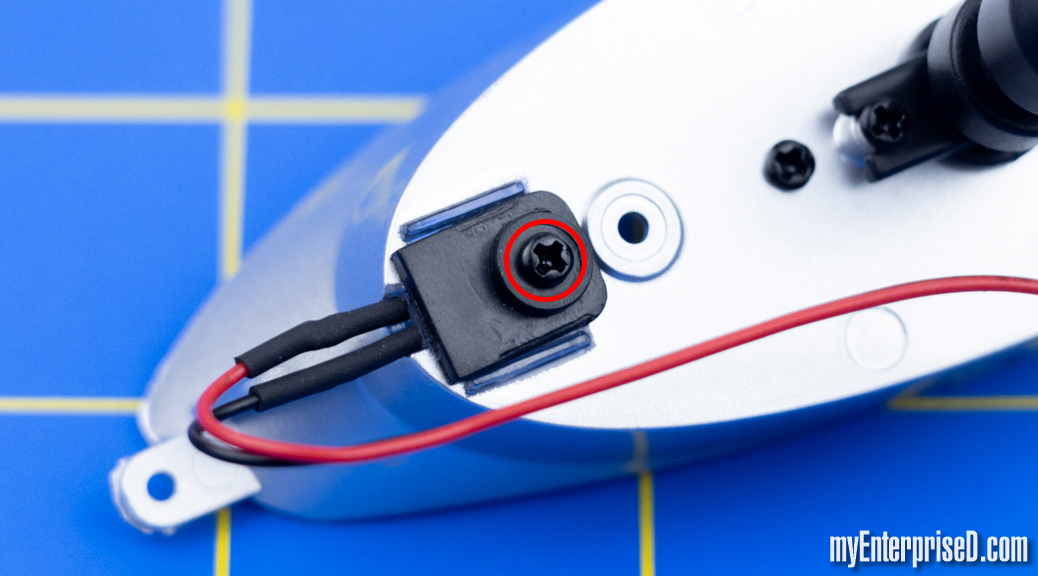 Be sure to check the holes of these plugs match the pins of the PCB. Trying to insert these plugs backwards can damage the pins: 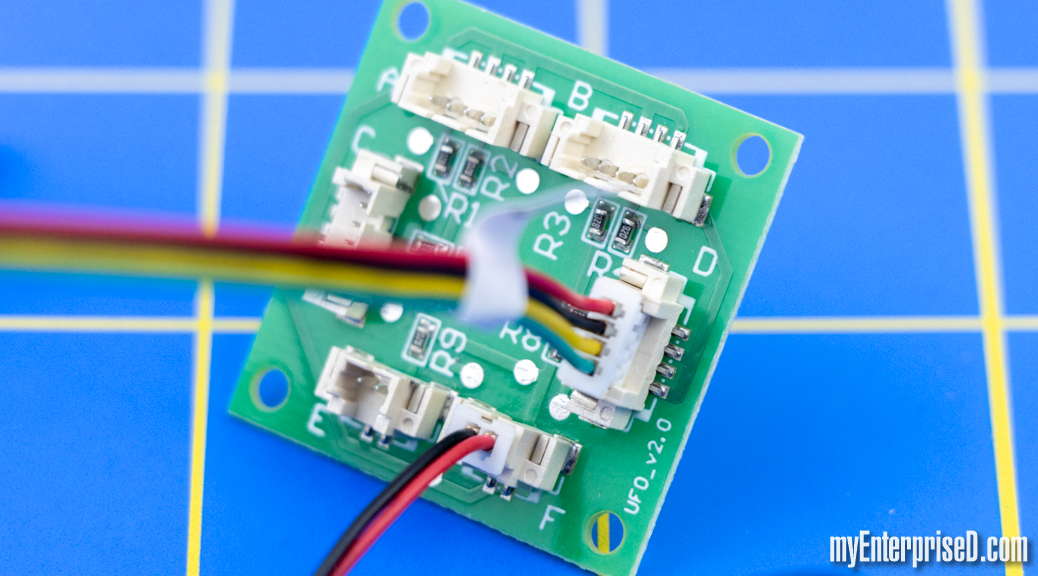 This should cause the two LEDs mounted in the Reflector to light up.

If they do not, check your connections and ensure fresh batteries are installed in the box correctly: 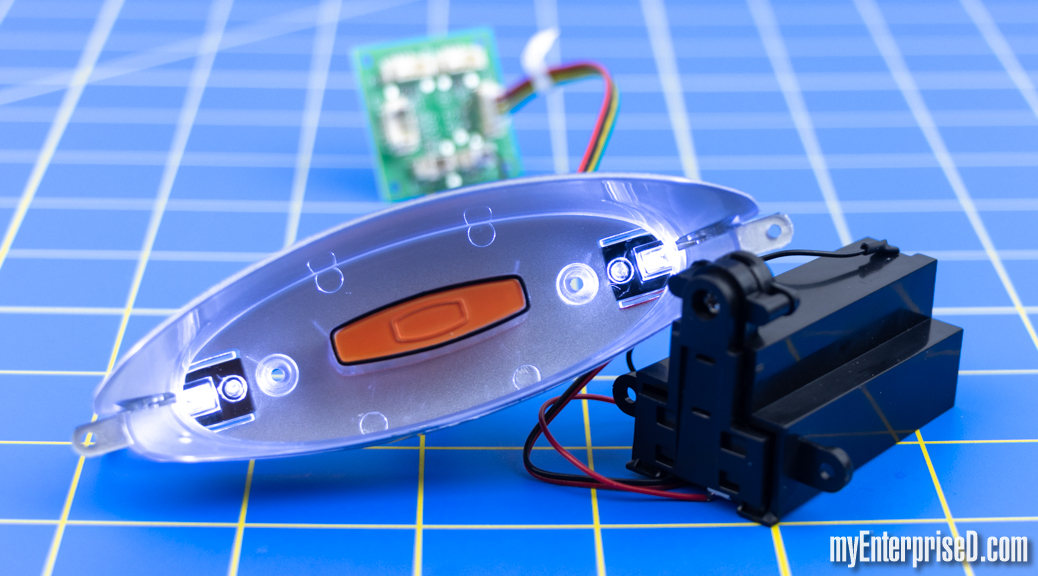 NOTE: I am not using the Deck Lights as I painted over my Emergency Flush Vents, but I installed the cable just for this picture. Additionally, while I connected the ‘C’ wire to the ‘D’ socket in this picture, all of the 4-pin sockets are the same so any of them work for this test: 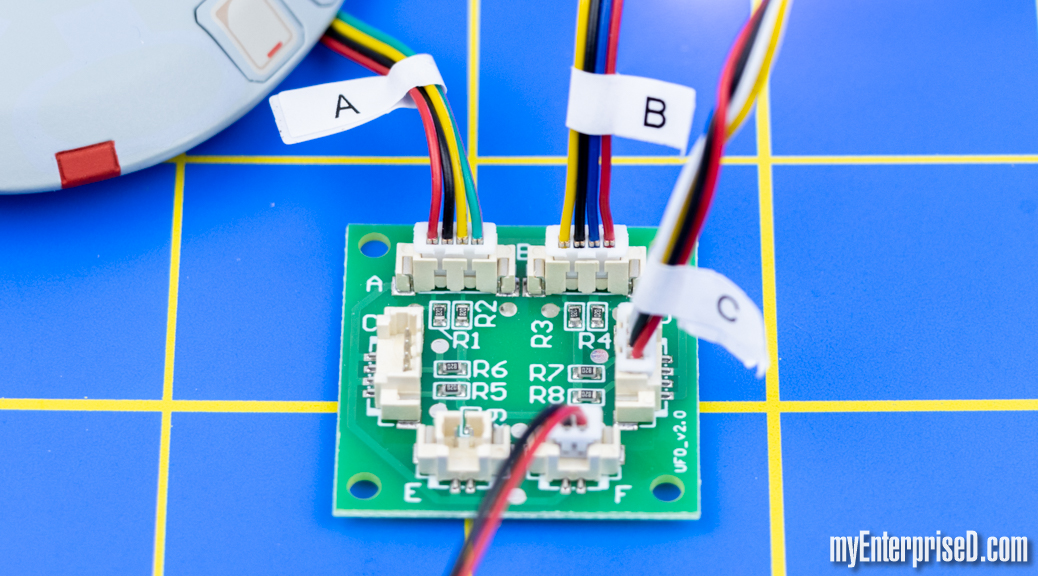 All your Deck Two lighting should now be powered up: 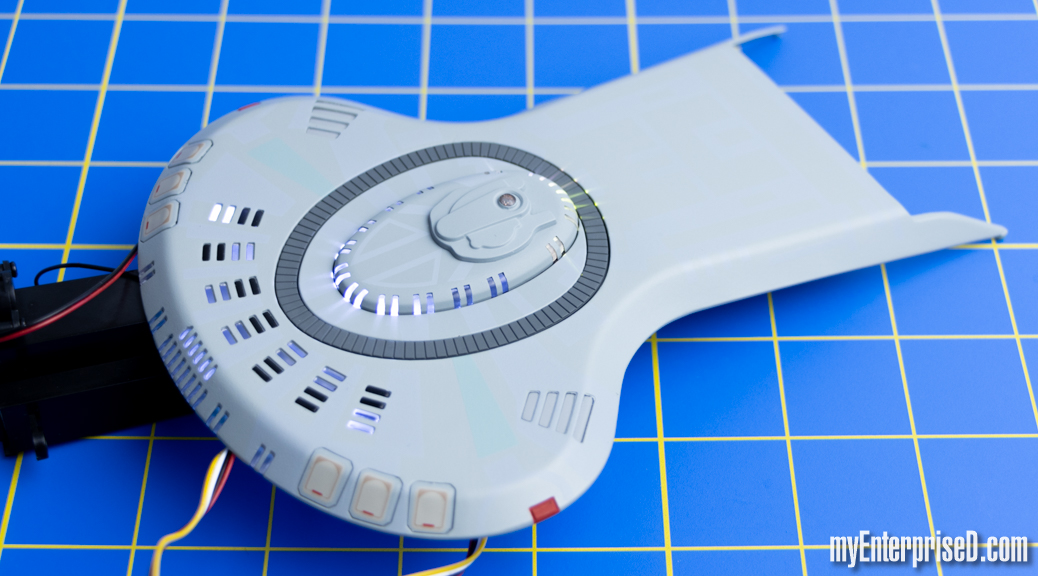 This was a good time to check on the mod work I did back in Stage 1 to minimize light leaking and diffuse the windows. I think it worked out well: 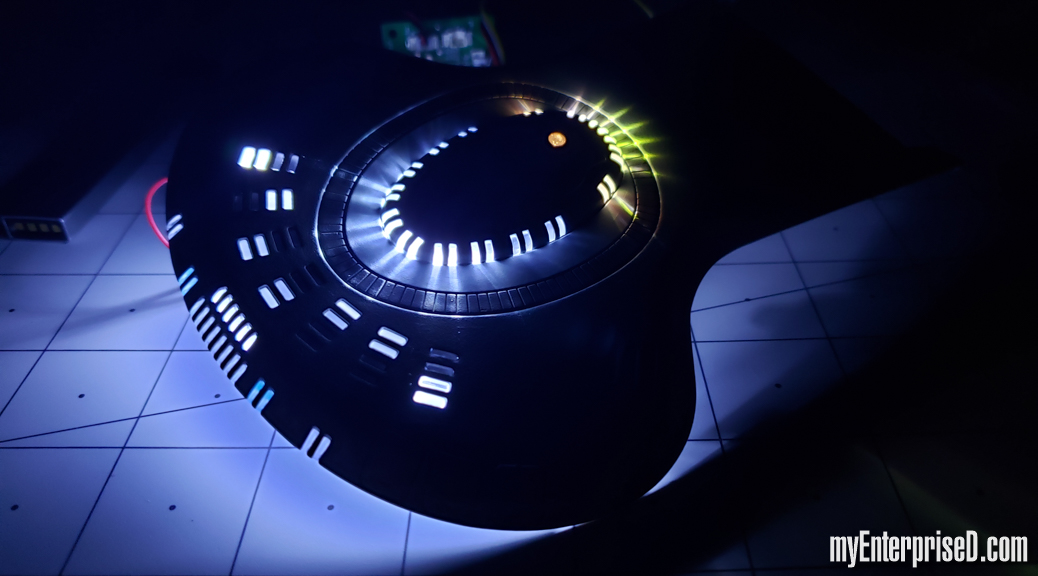 Once you are satisfied with the lighting test, disconnect all cables from the PCB and safely store these parts for later use.

Let there be light! I do wish I had this test PCB back when we were first installing the lights in Stage 1. This would have made it easier to test the mod work I did, but in the end, it turned out just fine. I hope there are more parts to the Deflector Dish assembly it as it doesn’t quite look right at this point. I have a feeling it is going to be many months until we actually install it, so there is still time.