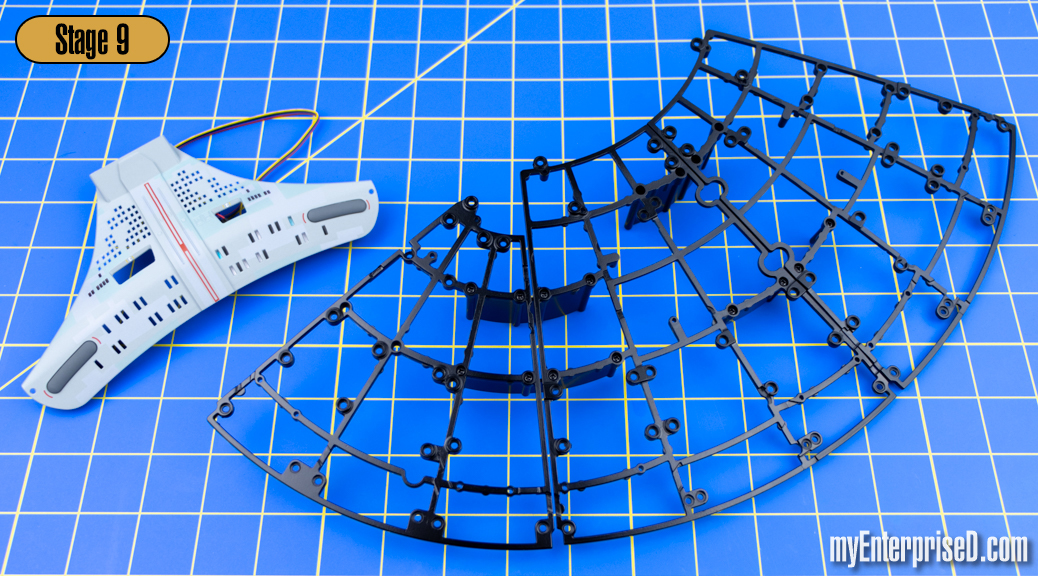 “As the saucer skeleton continues to expand, an intricate arrangement of deck windows starts to take shape – along with the working lights that will bring your Enterprise-D to life.“

Fun Fact: Stage 9 on the Paramount lot is where filming sets from the first four Star Trek movies were redressed to become The Next Generation sets containing the corridors, Engineering, Transporter Room, Sickbay, junior officer’s quarters, and a ‘swing’ area that could portray a cargo bay, shuttlebay, or holodeck. It is pretty easy to notice the similar designs between the early movies and the TV show.

Materials: All of the parts in this stage are plastic, except for the metal Upper Skeleton 3. 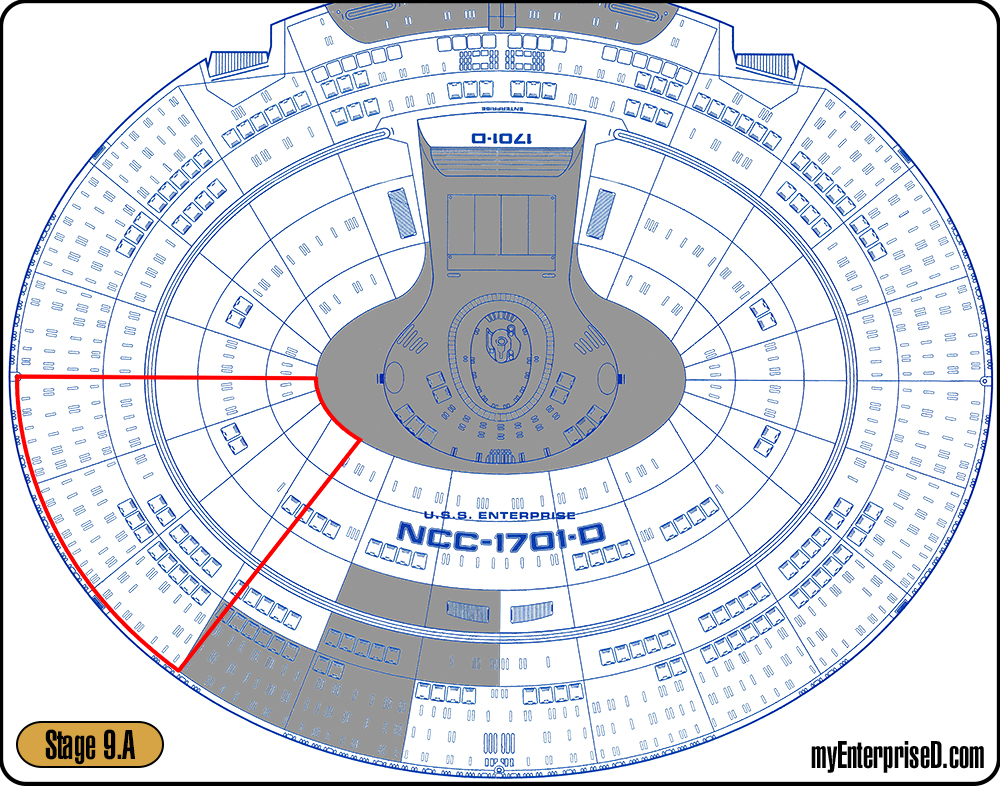 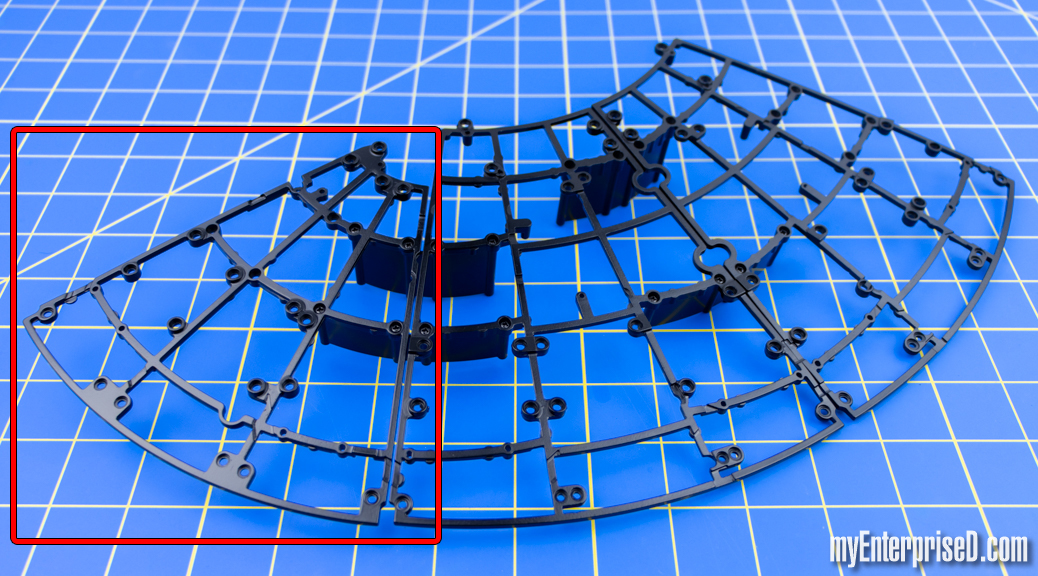 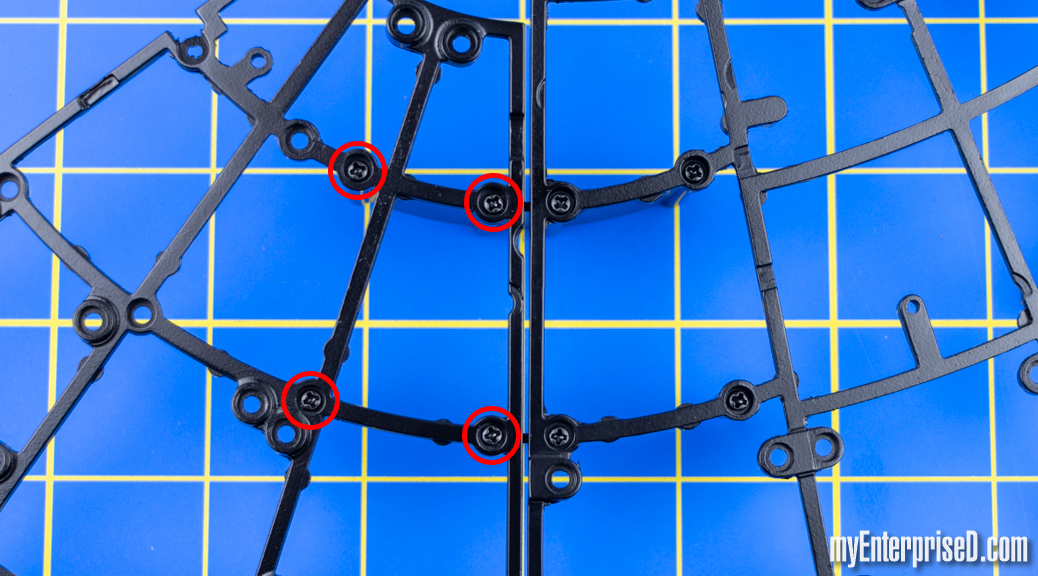 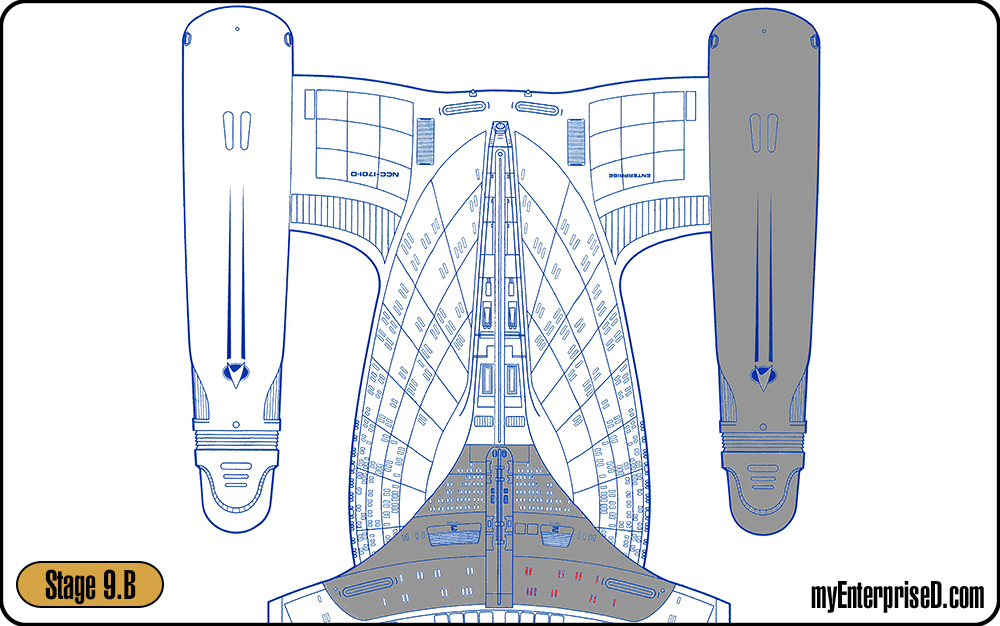 I recommend using sprue cutters or sharp hobby knife here to have as clean a cut as possible.

It is also worth mentioning here that I sanded all of these windows down so they do not stick out of the hull: see The Windows page for more details: 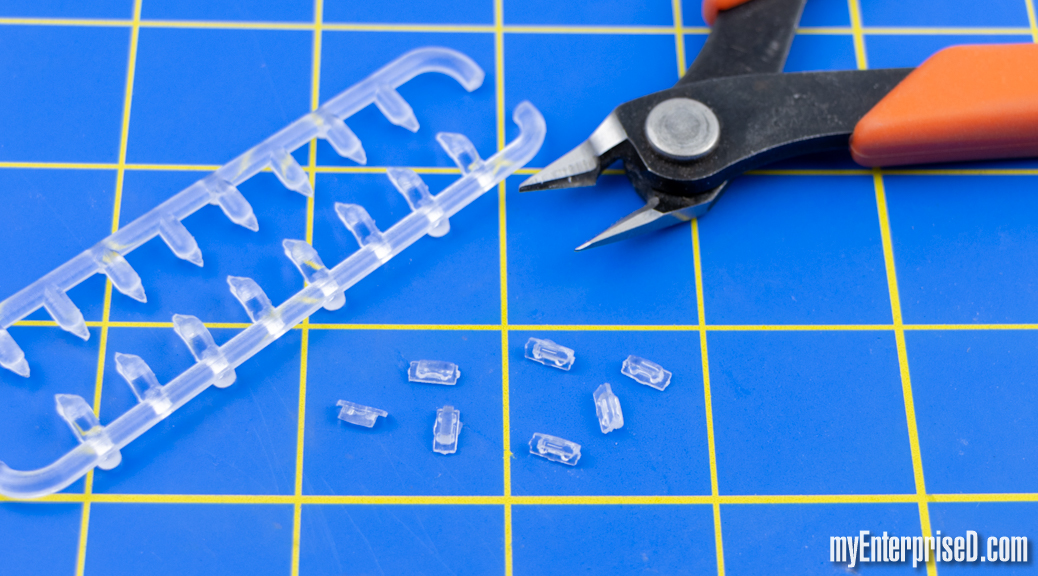 Retrieve your Battle Section Rear Neck assembly from the previous stage. Fit these Clear Windows into the matching slots on the left side, as shown.

Be sure that the ‘L’ embossed on the back of each window is facing right-side up. On my model, I am following the layout in the instructions, but you can fit these windows in any arrangement you choose: 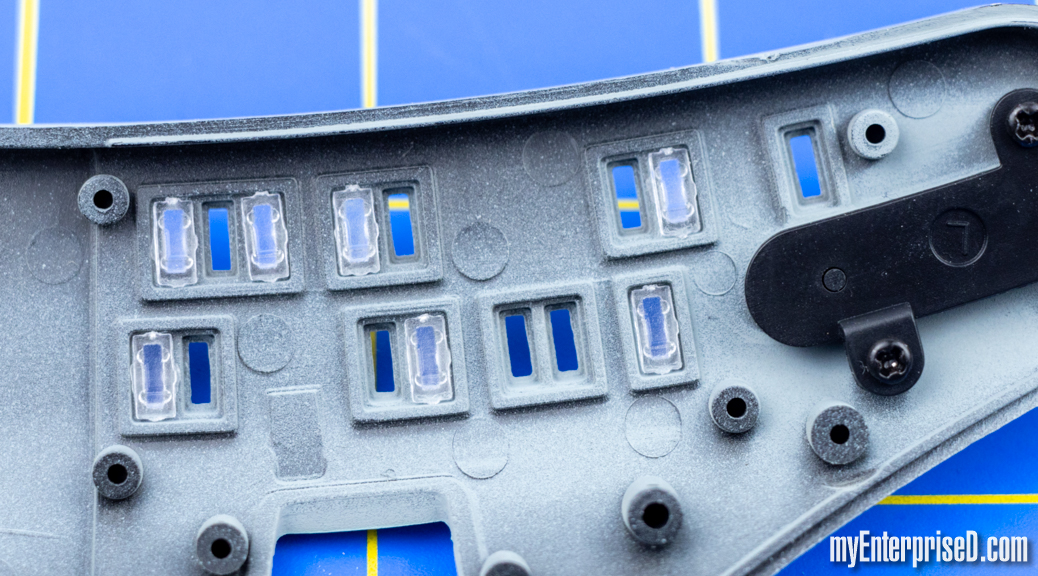 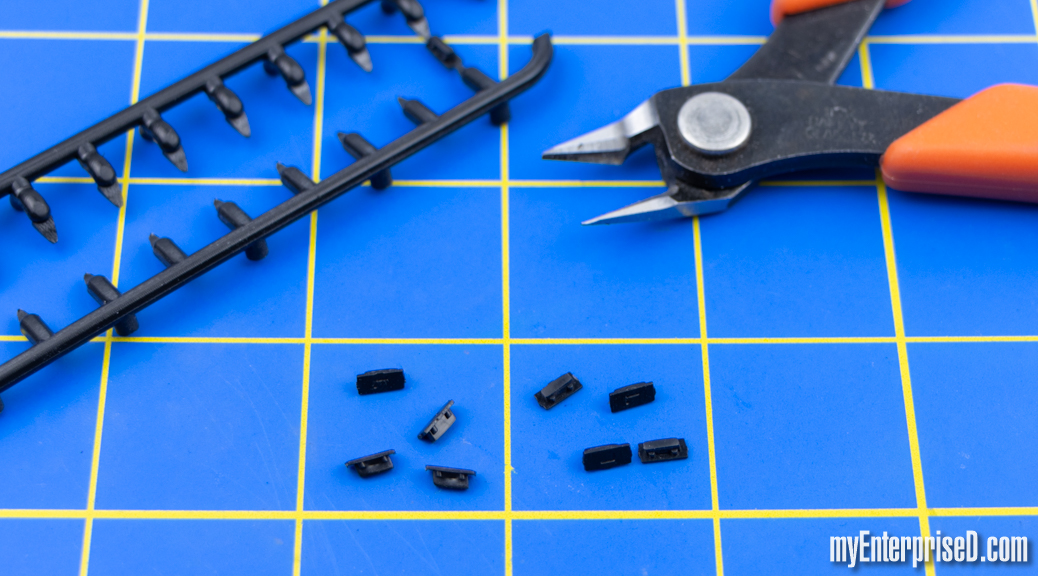 Fit these Dark Windows into the remaining matching slots on the left side, as shown.

Again, make sure the the ‘L’ embossed on the back of each window is facing right-side up: 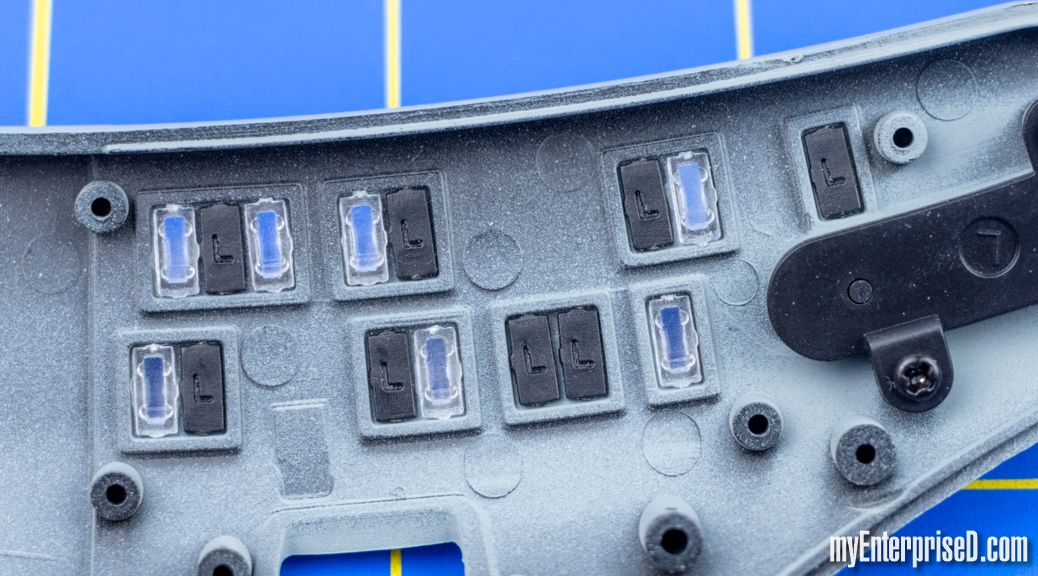 As I have done before, I used my turquoise Sharpie brush marker to add a different color to a couple of the Clear Windows: 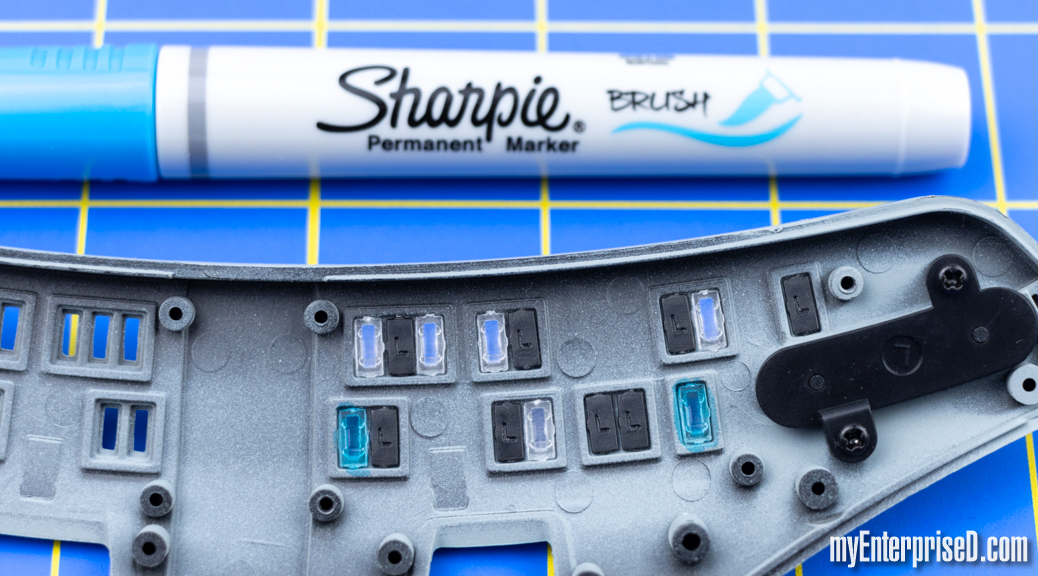 Then, also as before, I used pieces of black electrical tape to mask off the Dark Windows to prevent light leakage: 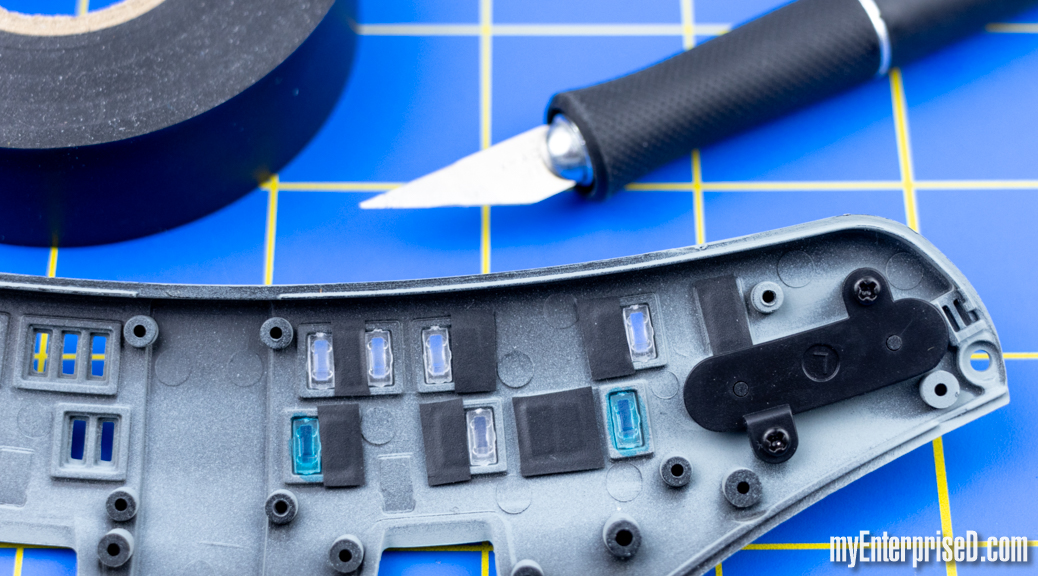 Slot the LEDs on the end of the Left Windows Light cable into the matching notches of the Window Reflector Left, as shown. 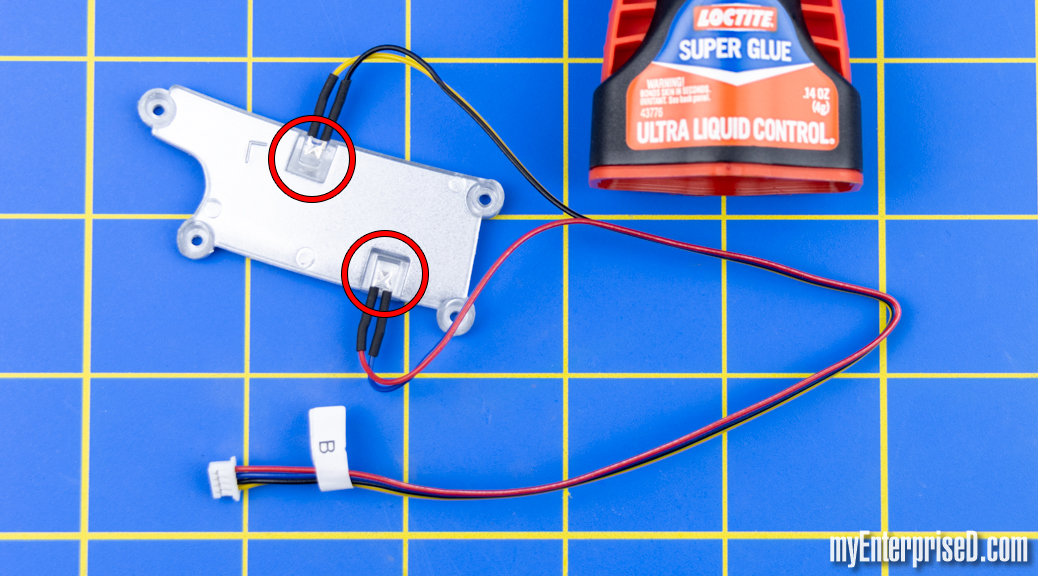 Carefully bend the leads of the LED on the black/yellow wire to a 90° angle, as shown.

There is a notch in the Window Reflector Left for these wires to rest in: 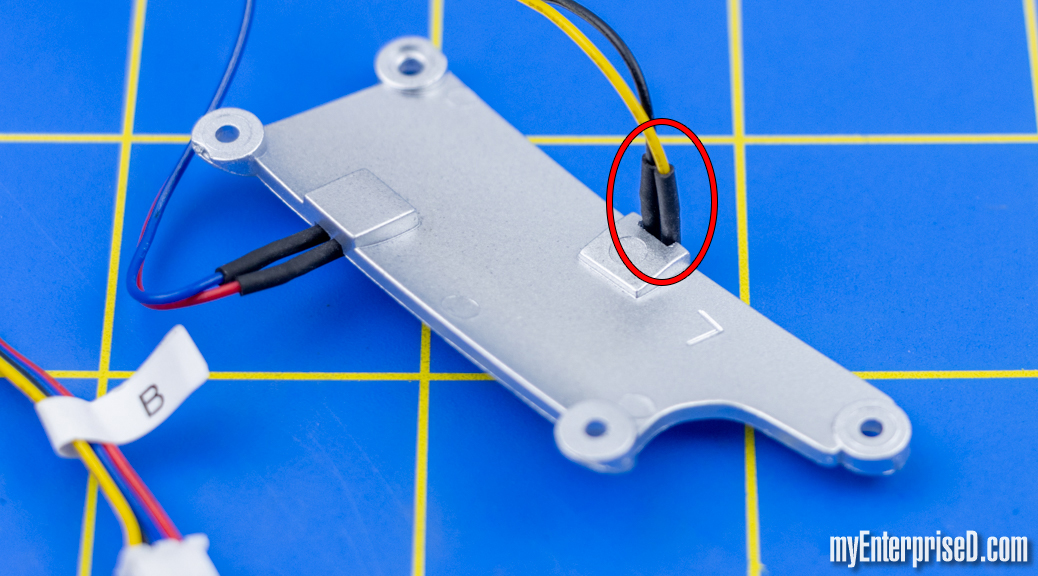 Fit this Window Reflector Left over the Windows we installed earlier, aligning the four screw holes as shown.

You will note that the leads of the LED on the red/blue wire also needed to be bent back a little to make this reflector fit flush. I have a feeling we will need to bend them back even more to install the shuttlebay door later on: 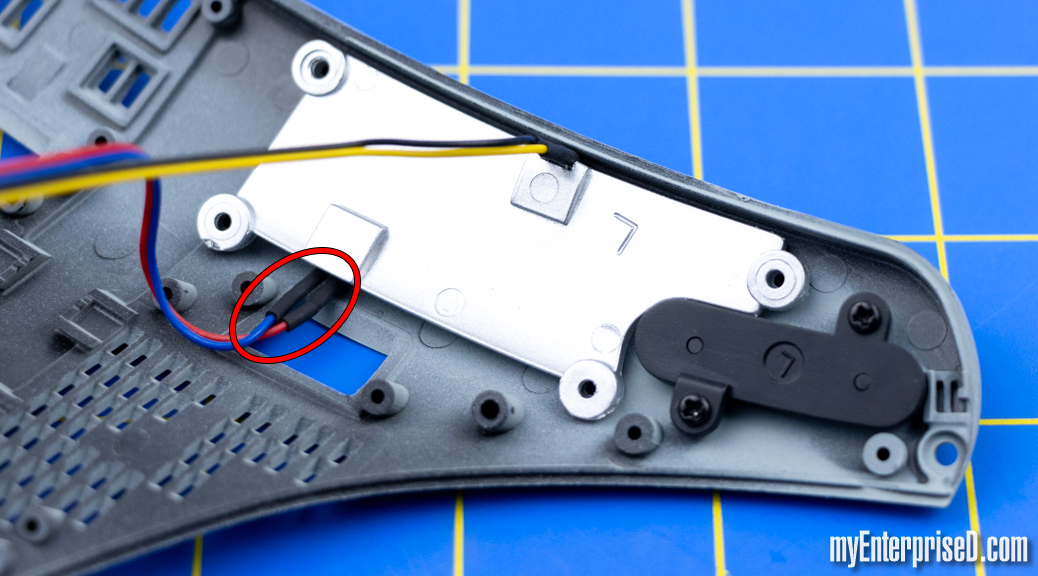 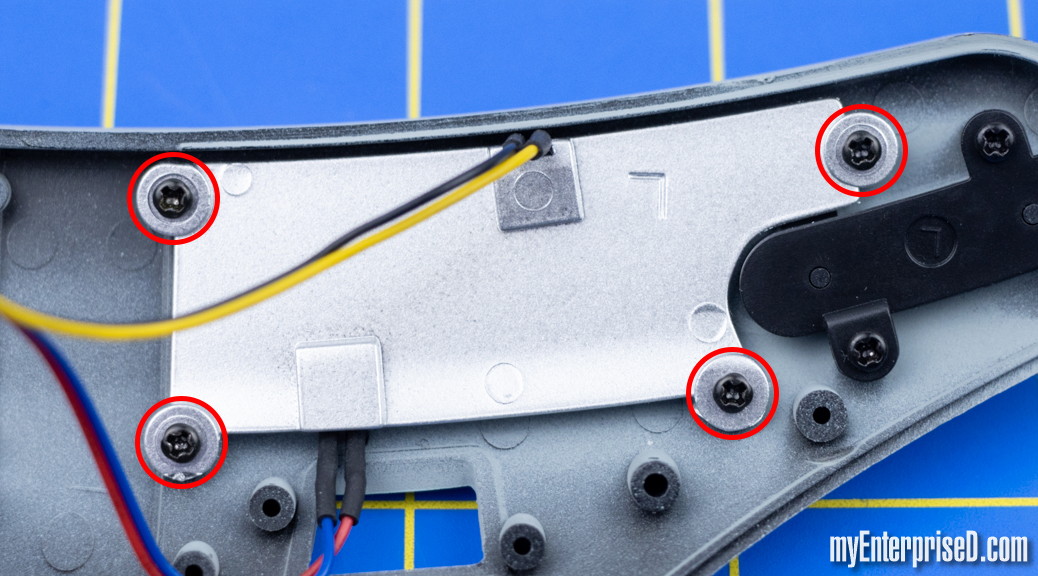 We can test these lights by connecting the Left Windows Light cable to one of the 4-pin connectors on the PCB and the Battery Box to the ‘F’ connector.

I did do this and both LEDs worked, I just did not take a picture. We will see these lights working in the next stage.

The saucer skeleton just keep getting bigger. Soon, we will be able to see its full width. I can’t wait!