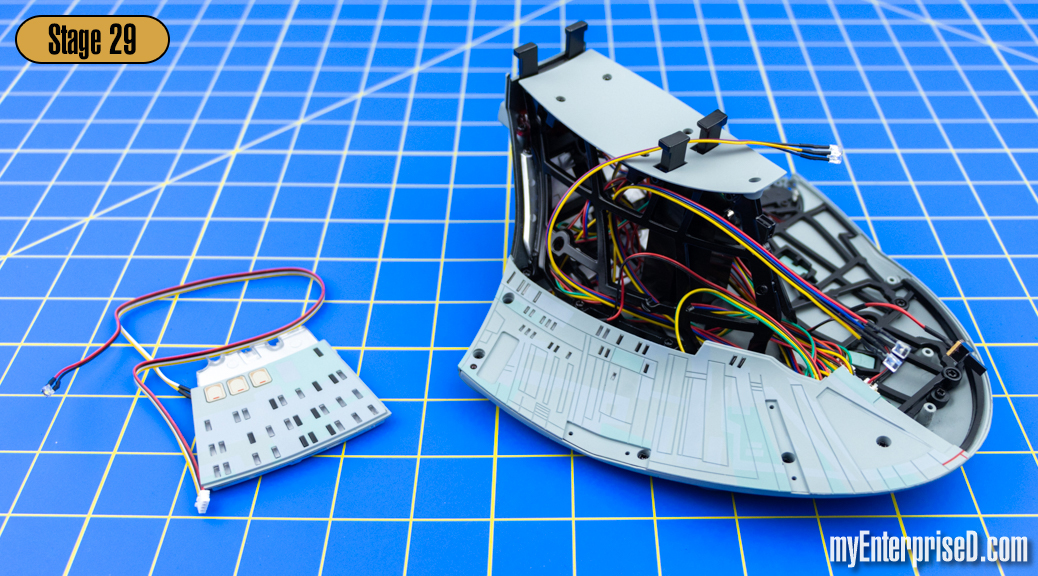 “Discover windows with built-in reflectors as you continue to assemble the graceful neck section of your Galaxy-class starship.“ 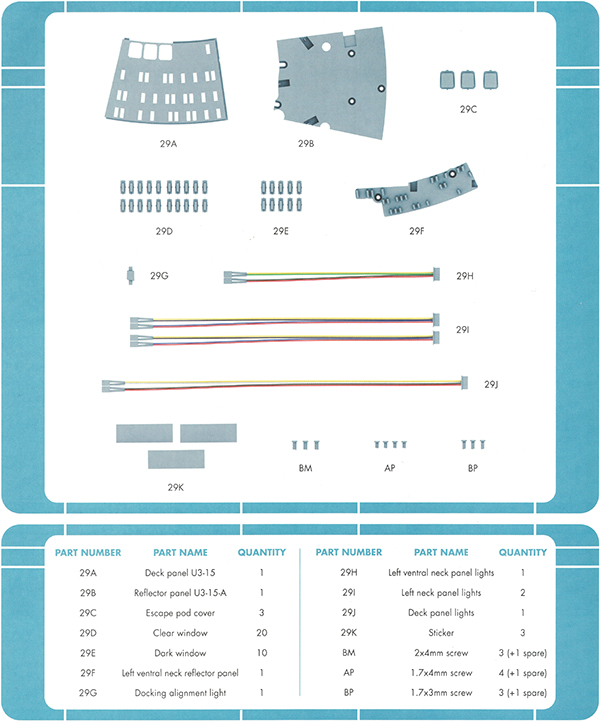 Materials: All of the non-electrical parts in this stage are plastic.

Carefully remove three (3) Escape Pod Covers, twenty (20) Clear Windows, and ten (10) Dark Windows from their sprues and fit them into the back of Deck Panel U3-15, as shown. 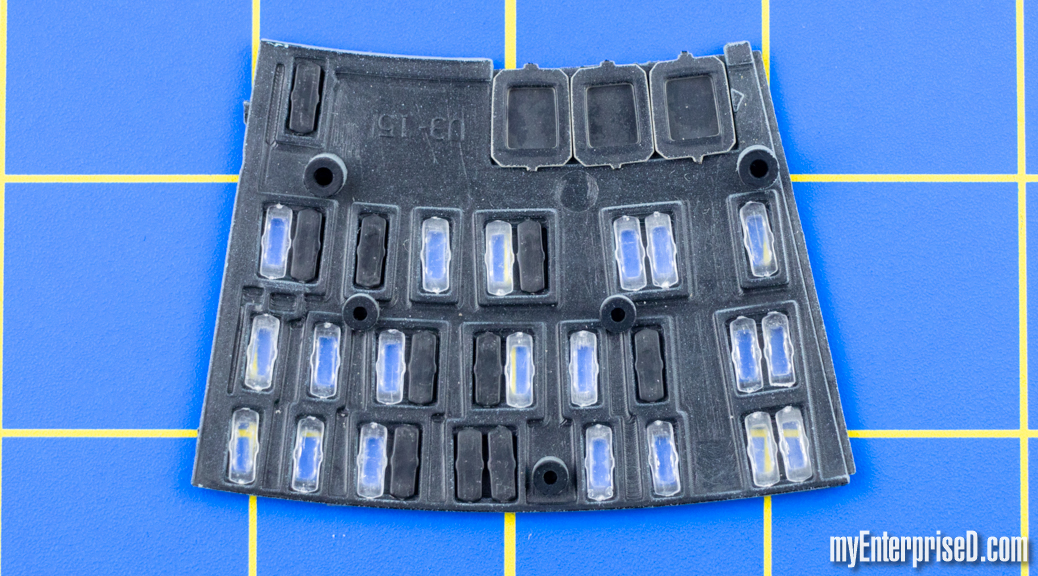 As before, I used pieces of black electrical tape here to seal off the Escape Pod Covers and Dark Windows and reduce light leak: 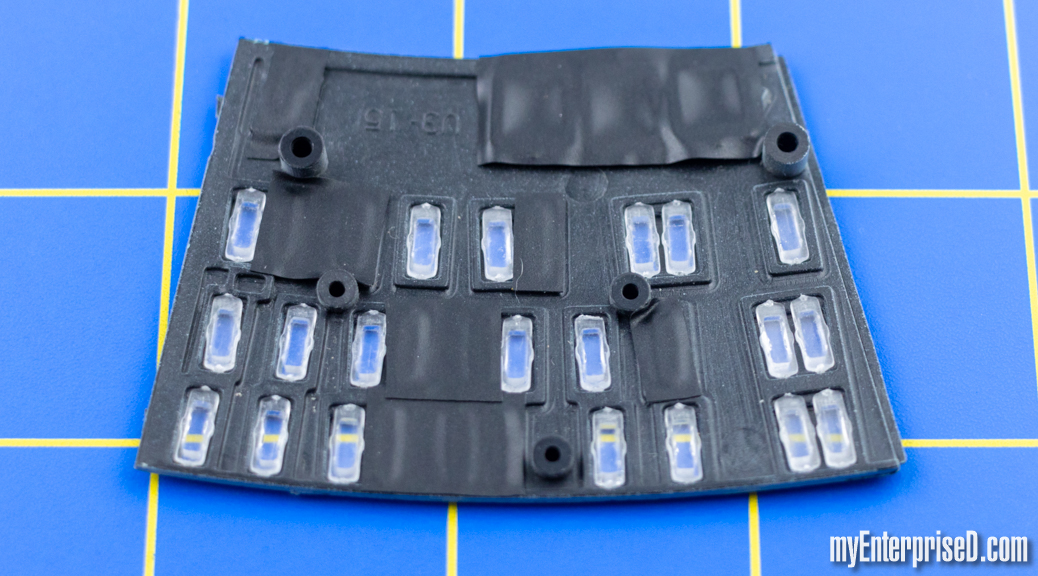 Fit the Reflector Panel U3-15-A over the posts on the back of this Deck Panel, as shown: 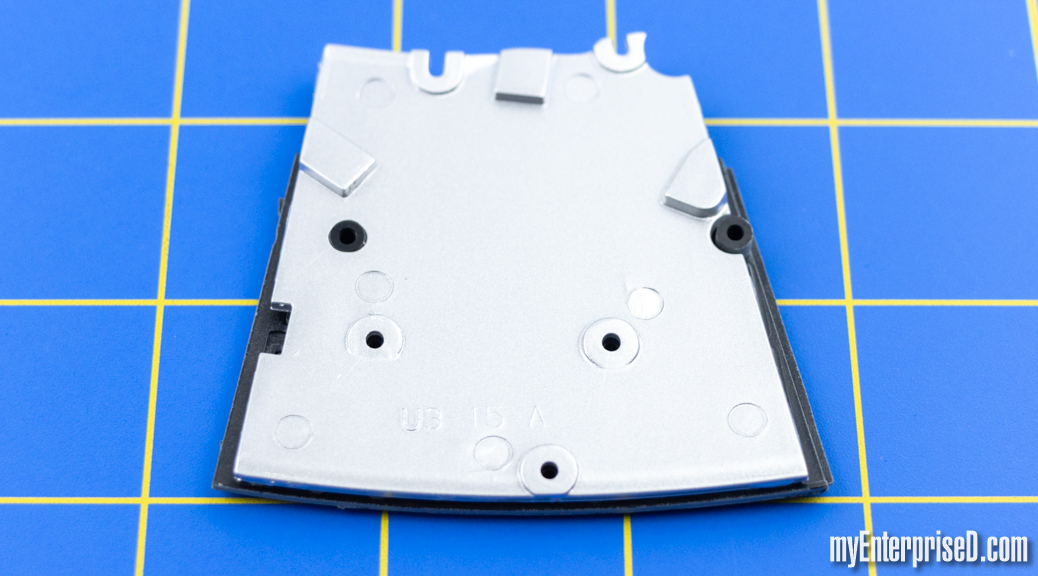 Slide the LED on the yellow/white wire of the long Deck Panel Lights cable (29J) into this notch of the Reflector Panel: 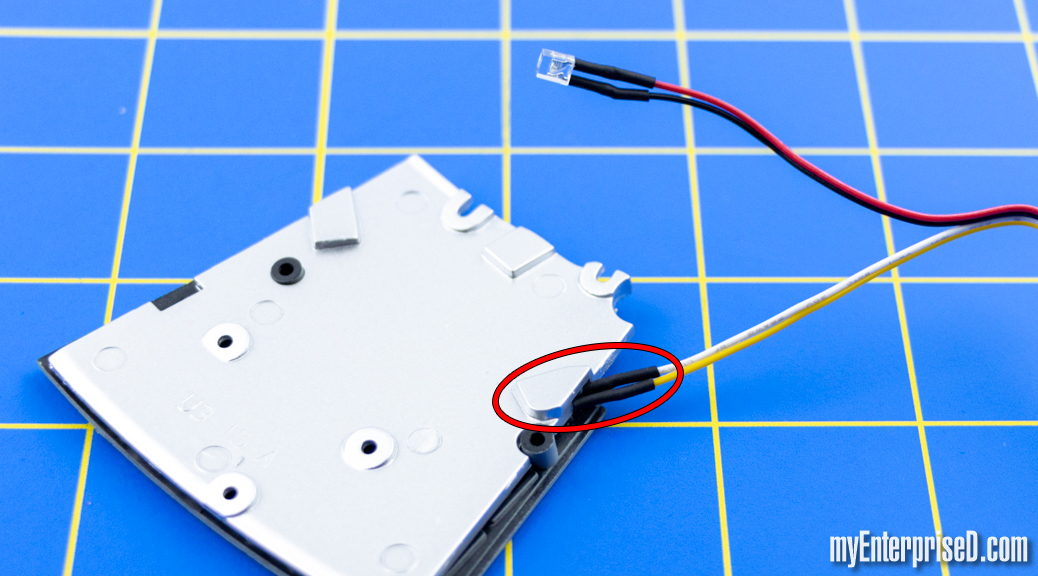 Secure the Reflector Panel to the Deck Panel with three (3) BP screws: 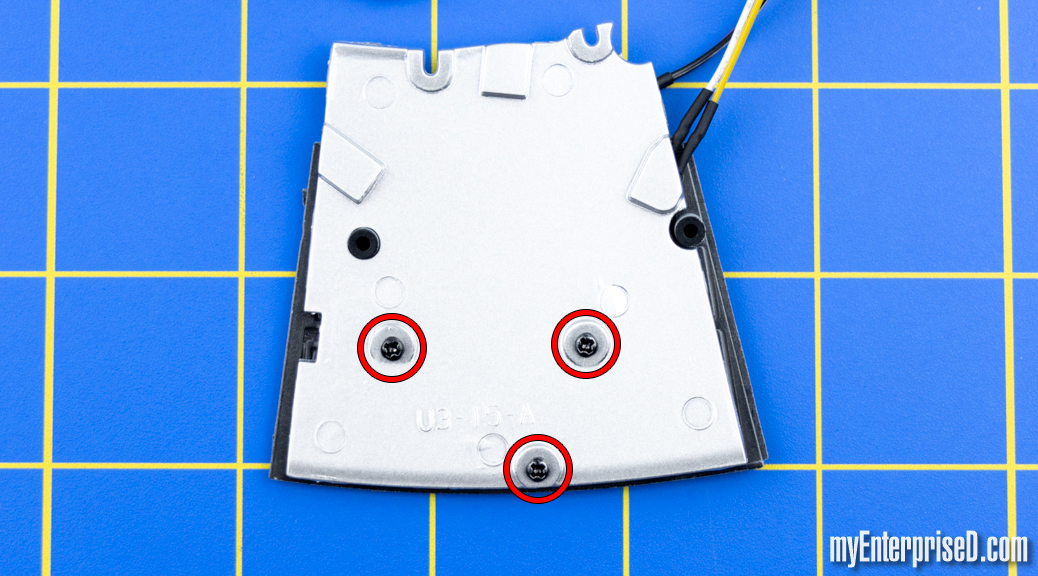 We can test these new window lights by connecting this Deck Panel Lights cable to the PCB and Battery Box: 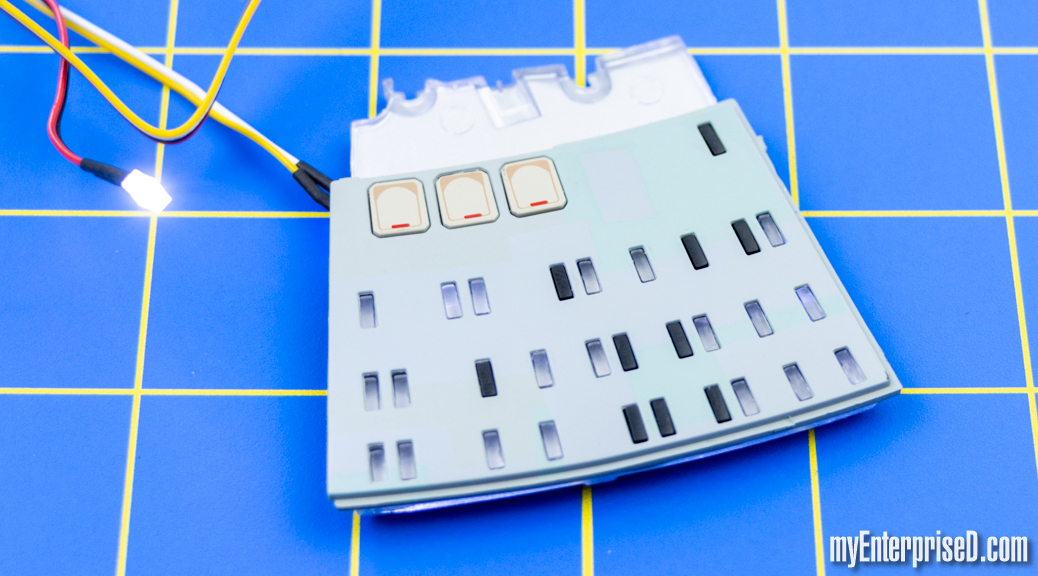 And, with the studio lights off: 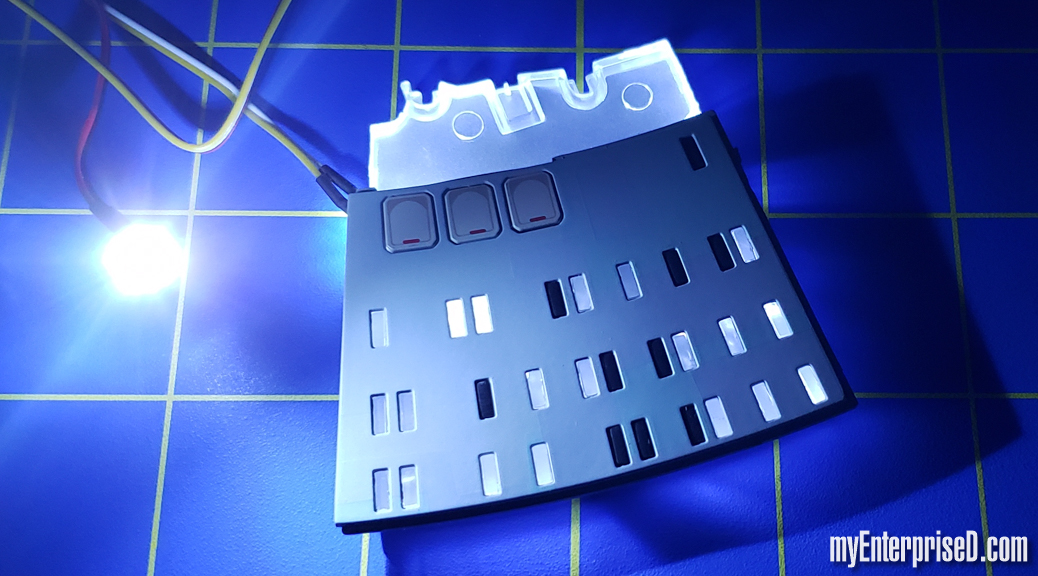 The windows lit by this panel are molded into the reflector plastic (including the blacked-out dark windows). A pair of dark windows are also pre-installed into the panel nearby: 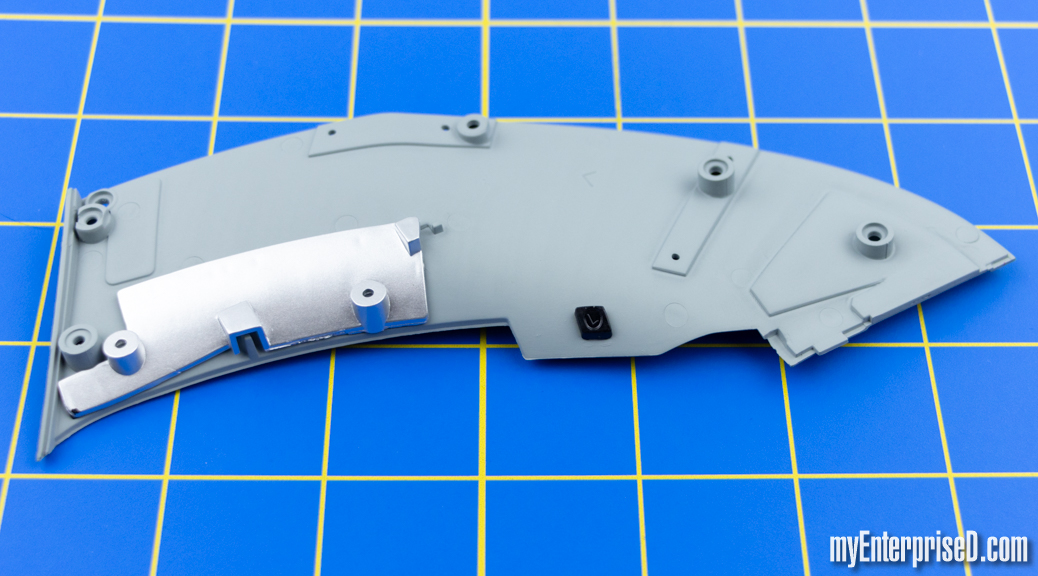 You may need to lift the reflector up off the panel a bit to get these LEDs under it: 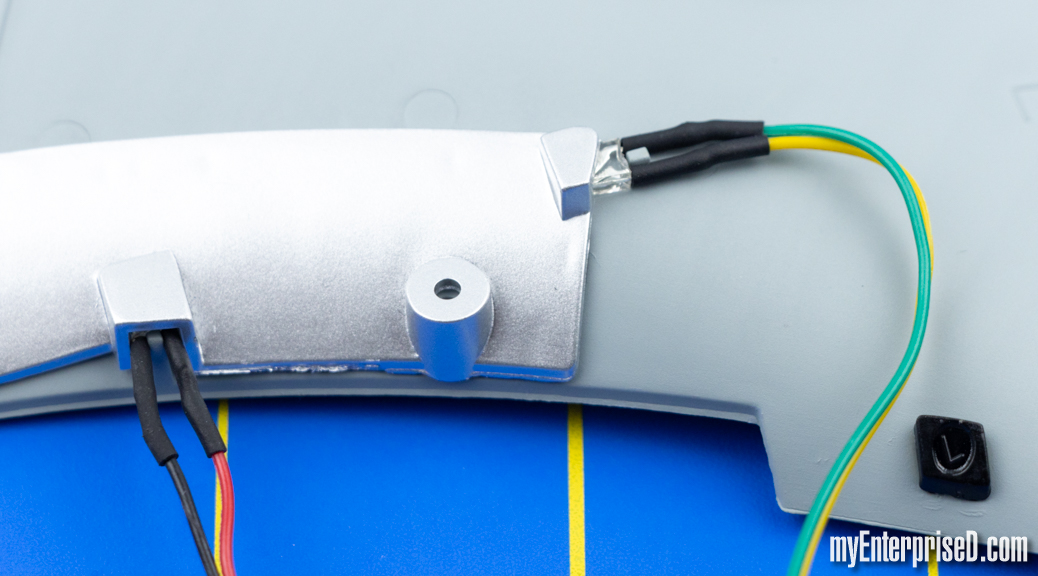 Secure this Reflector Panel into place with two (2) AP screws. Then, gently bend the leads of the LED on the red/black wires towards the front of the panel as shown (arrow below). Finally, use a Sticker to cover the LED on the end of the yellow/green wires.

The Stickers were a little narrow for me, so instead I covered the LED with a piece of black electrical tape: 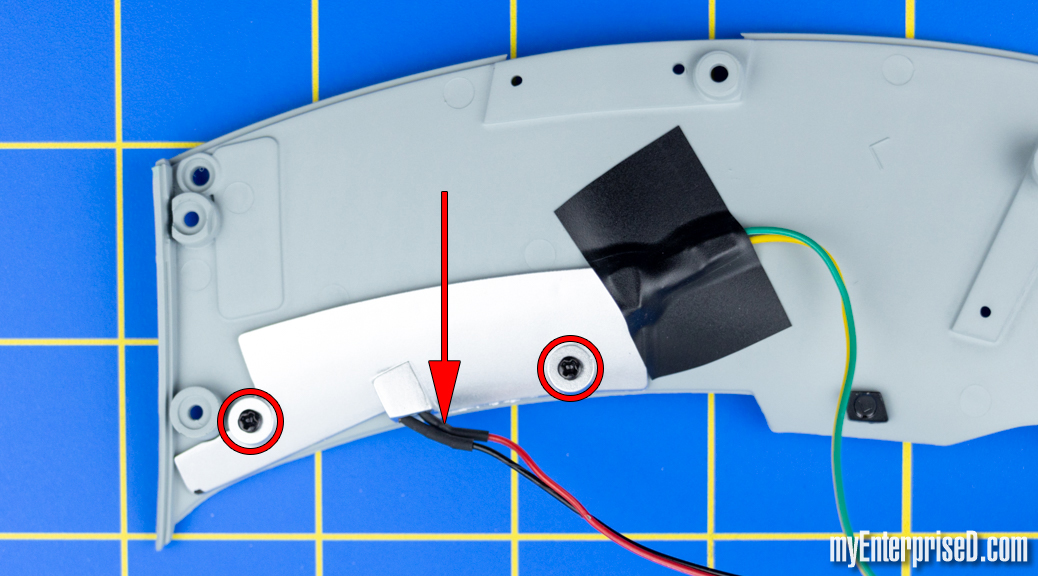 Feed the plugs of the two Left Neck Panel Lights cables through these openings of the Left Neck Bracket, as shown: 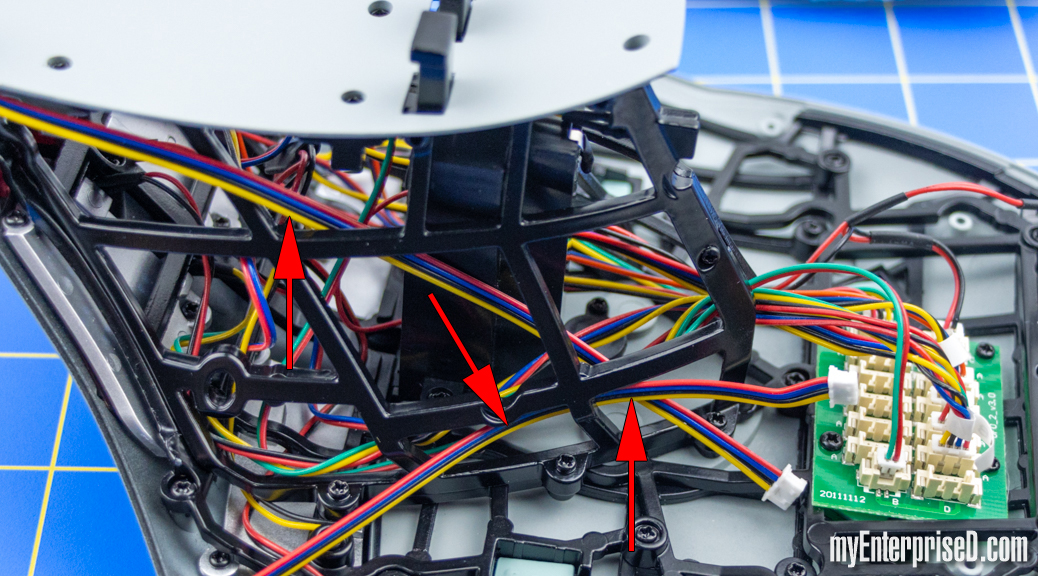 Here is the same picture with the wires we are working on highlighted if it makes it easier to see: 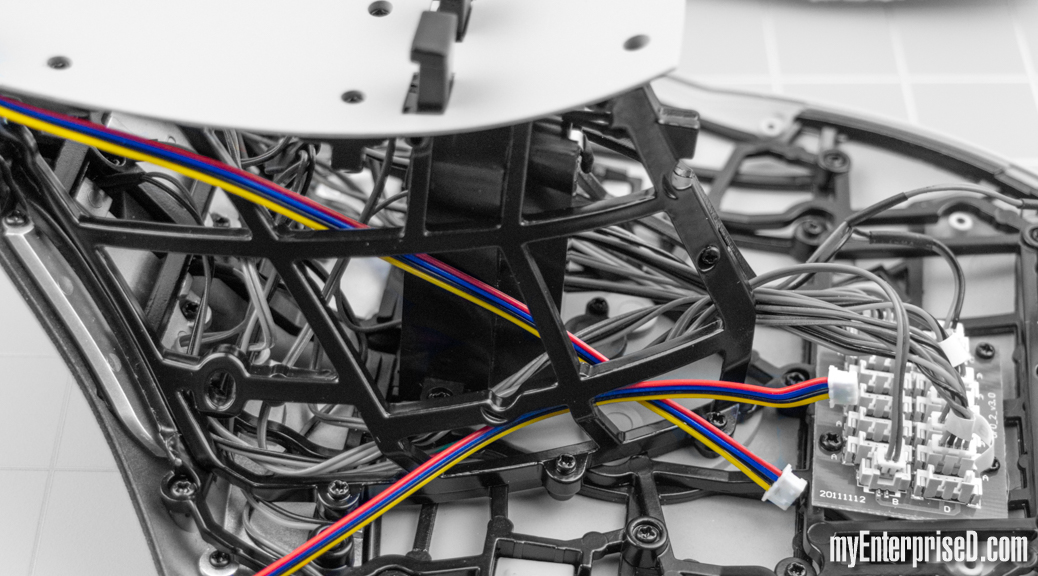 Connect the plugs of the  Left Neck Panel Lights cables to these sockets on the PCB: 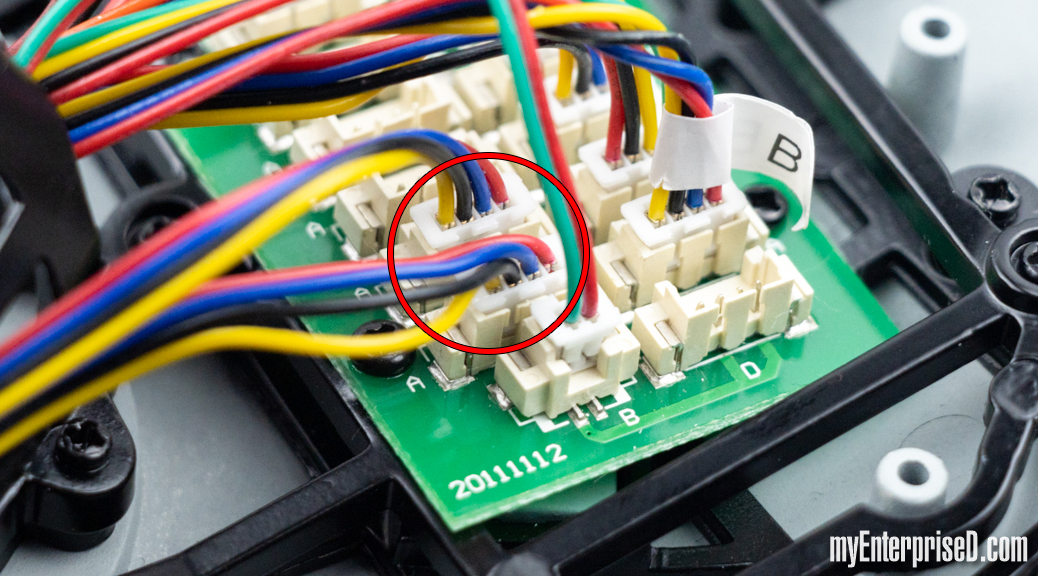 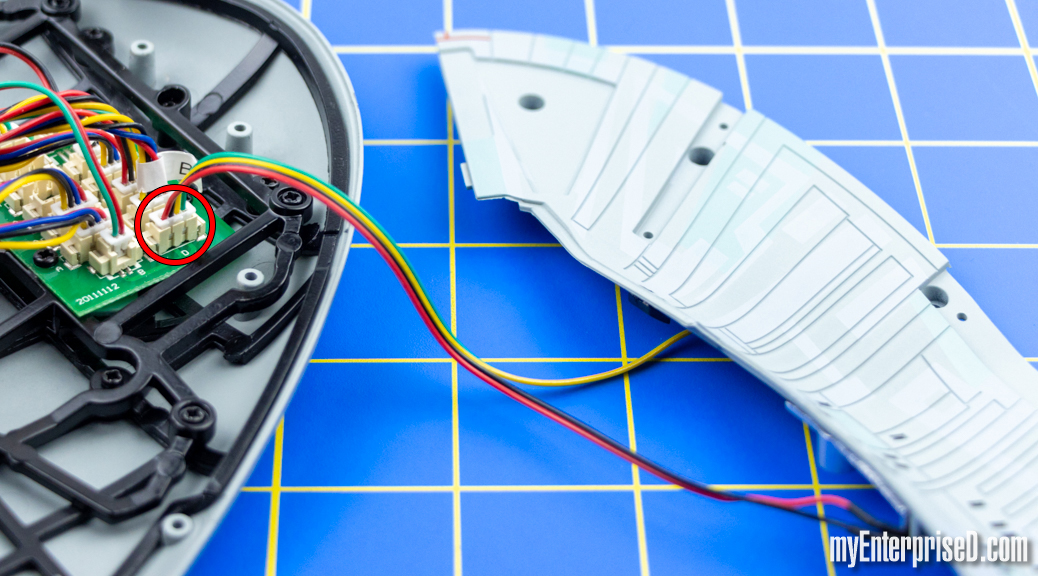 Fit the sloped end of the Docking Alignment Light into this port aft (left side rear) hole of the Battle Section Rear Neck, matching the sloping surfaces to each other, as shown.

When this is aligned correctly, the exposed end should point straight up: 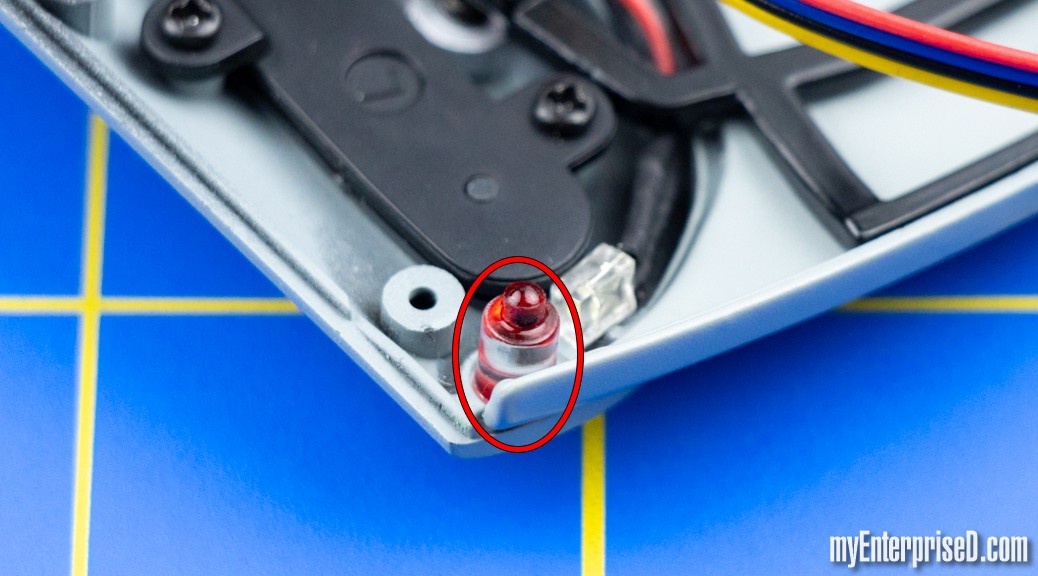 The Battle Section Lights LED that illuminates this red Docking Alignment Light is very bright and will easily show through the seams of the various panels nearby. To try and reduce this light leak, I took small pieces of black electrical tape and tried my best to seal things off. This included wrapping the entire Docking Alignment Light and the LED, as shown: 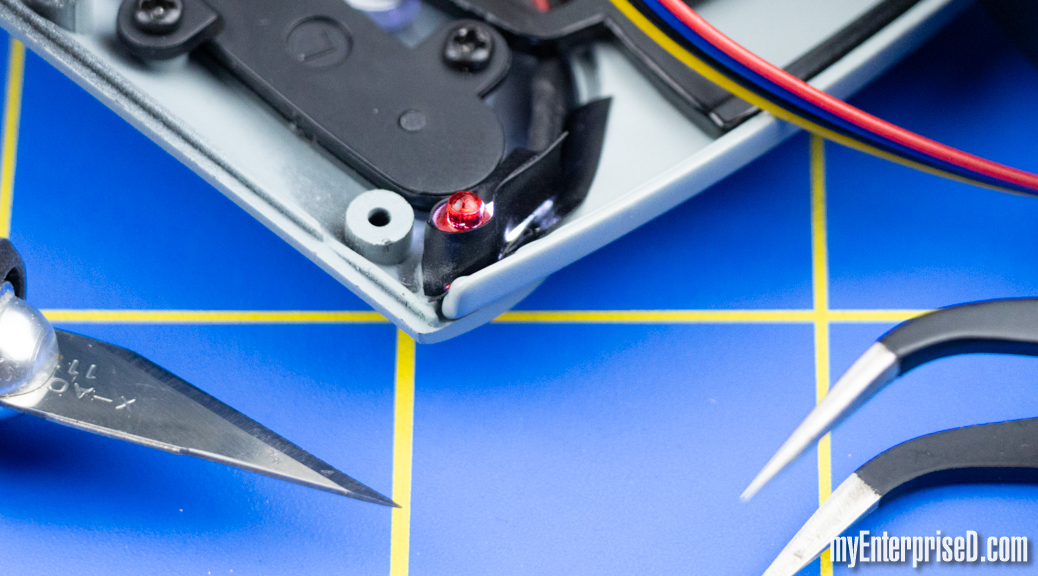 The wiring plugged into PCB will need to be pushed down and back to get this panel to fit flush. Also, make sure the top of the Docking Alignment Light pokes up through the matching hole of the Left Ventral Neck Panel: 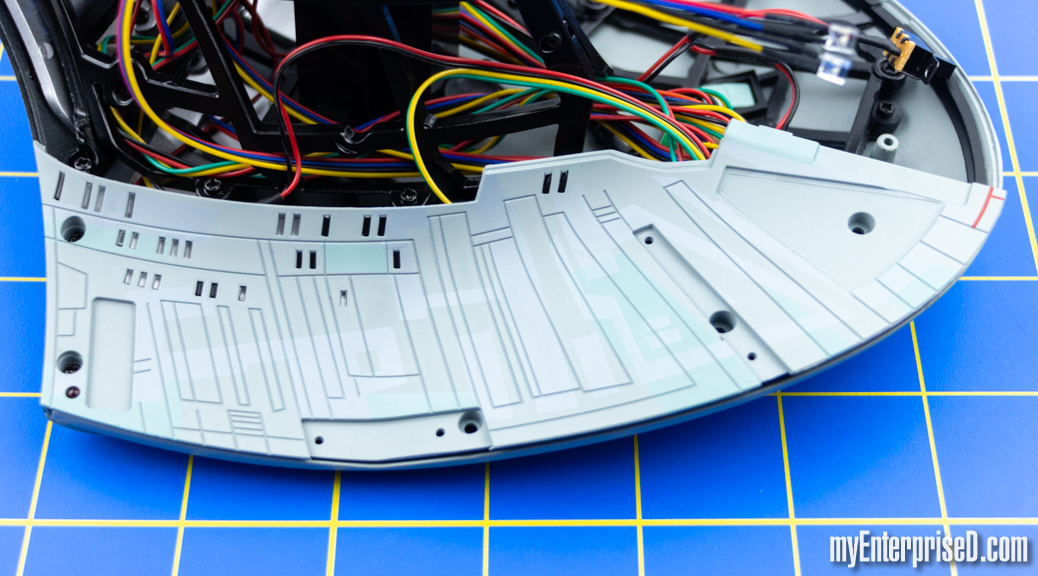 Ensure you are not pinching or trapping any wires while attaching this panel: 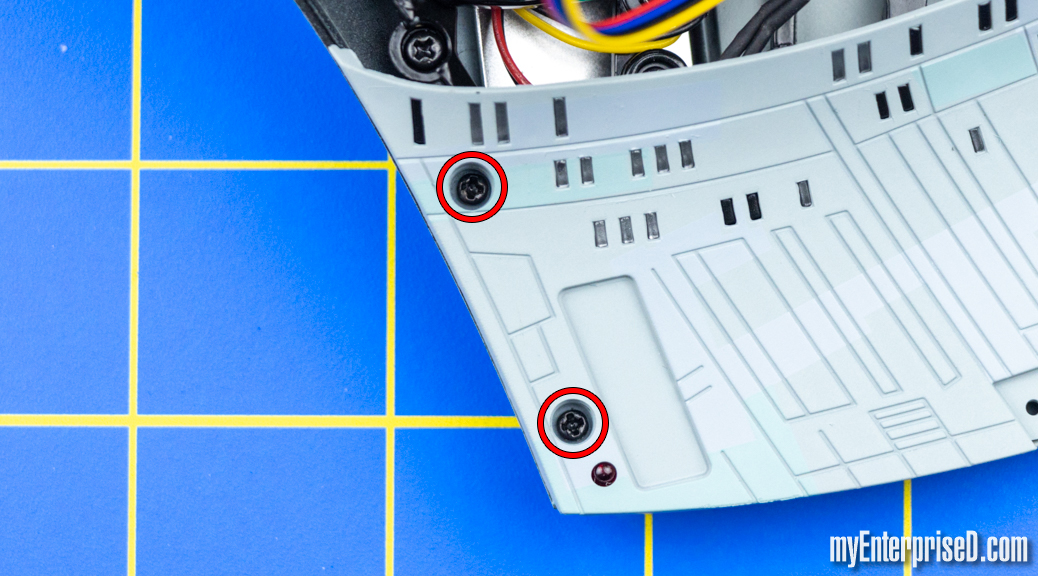 Secure the forward edge of the Left Ventral Panel with three (3) BM screws.

This is your friendly reminder to try using 3-in-One Oil on all screws going into metal: 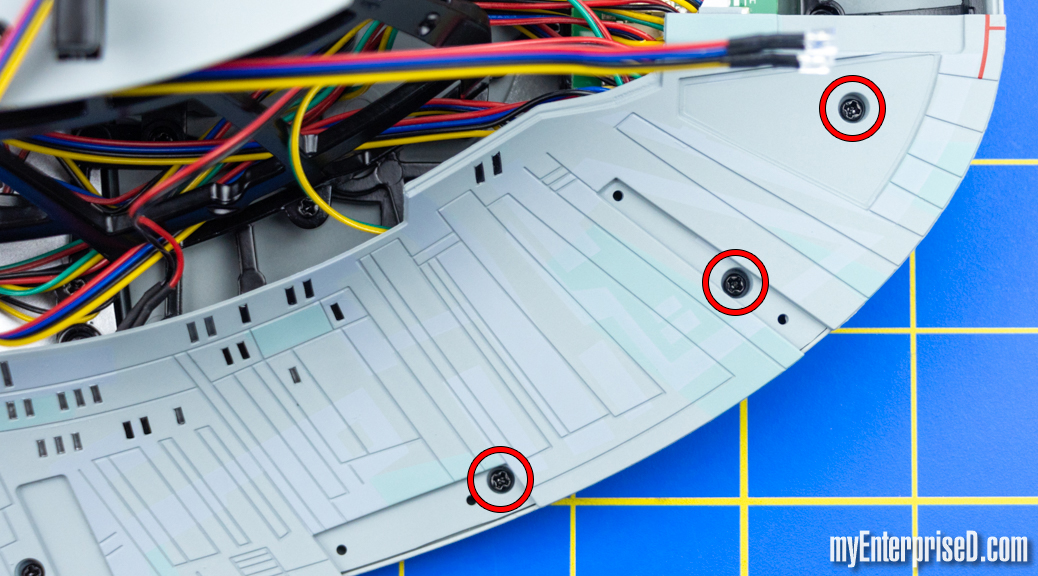 Slide the Battle Section switch to the ON position to test the lights: 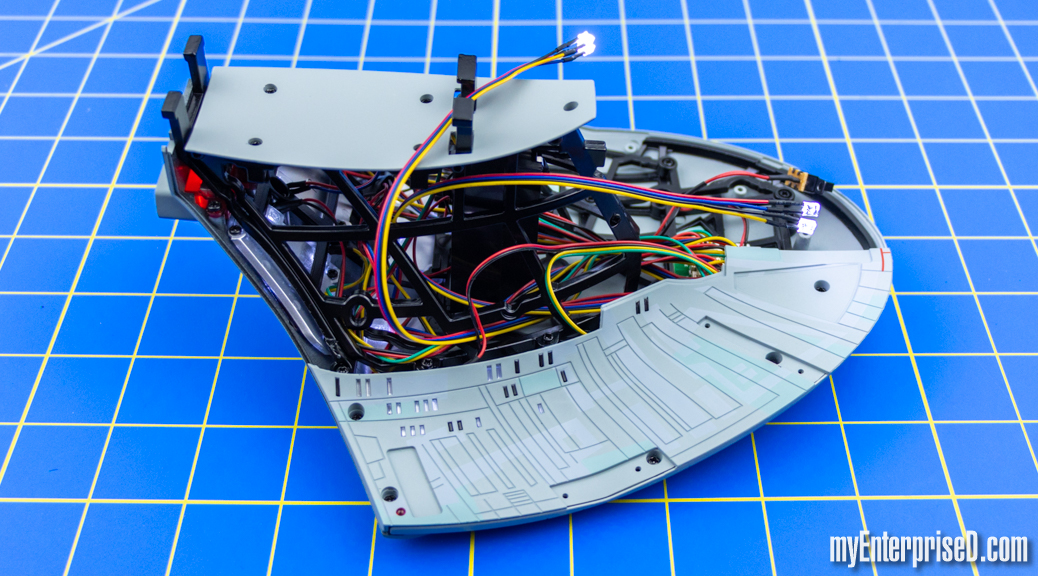 I took a short video to show these lights in action, specifically the red Docking Alignment Light and my attempt to reduce light leaking out:

We built the Deck Panel U3-15 assembly, but did not attach it yet. Keep it safe until we install it in a later stage. The Battle Section Neck is coming along nicely and I noticed that the final three screws we added will eventually be covered up by small panels. I was curious how Eaglemoss was going to hide most of the exterior screw holes and this gives us an idea.