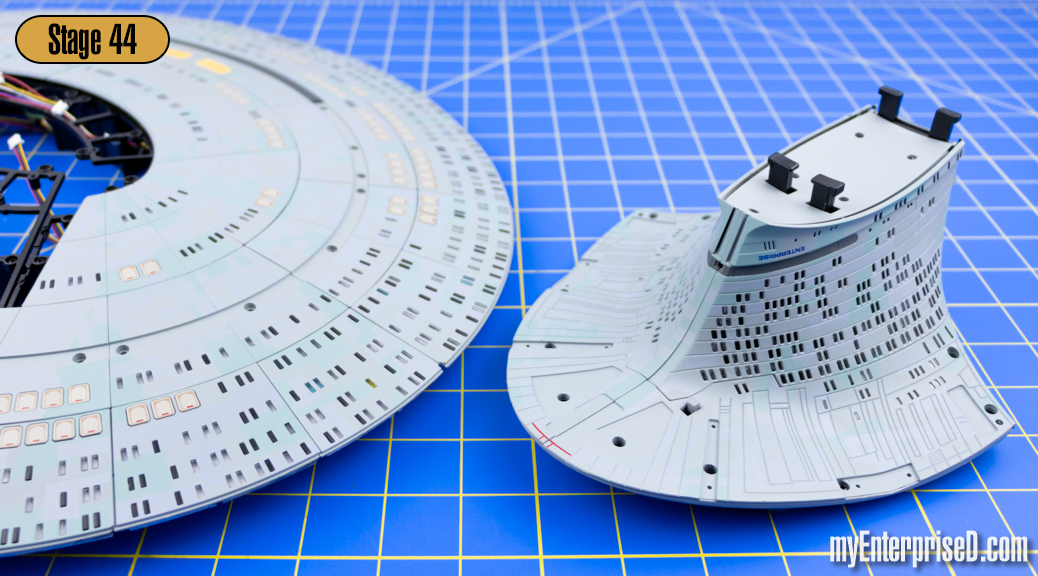 “In this short stage of the build, you will build and fit a saucer deck section with two reflectors, and add further detail to the battle section.“ 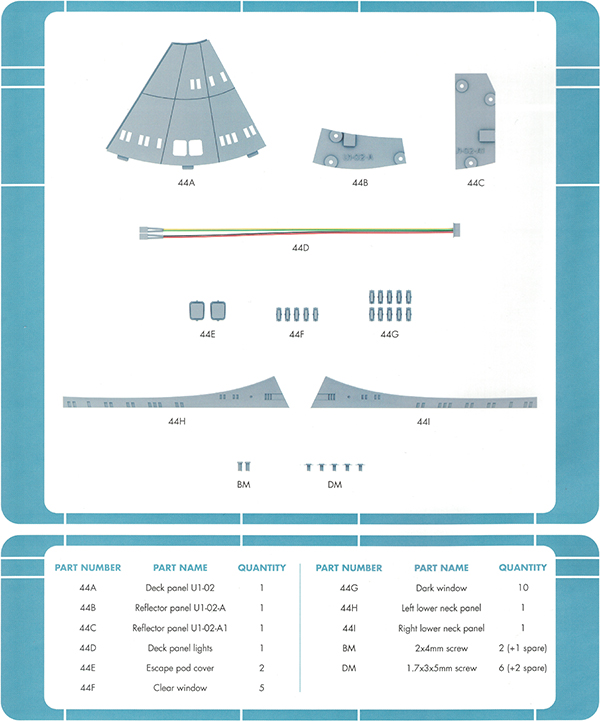 Materials: The Deck Panel in this stage is metal, but the remaining non-electrical parts are plastic.

Assembling and Installing Deck Panel U1-02 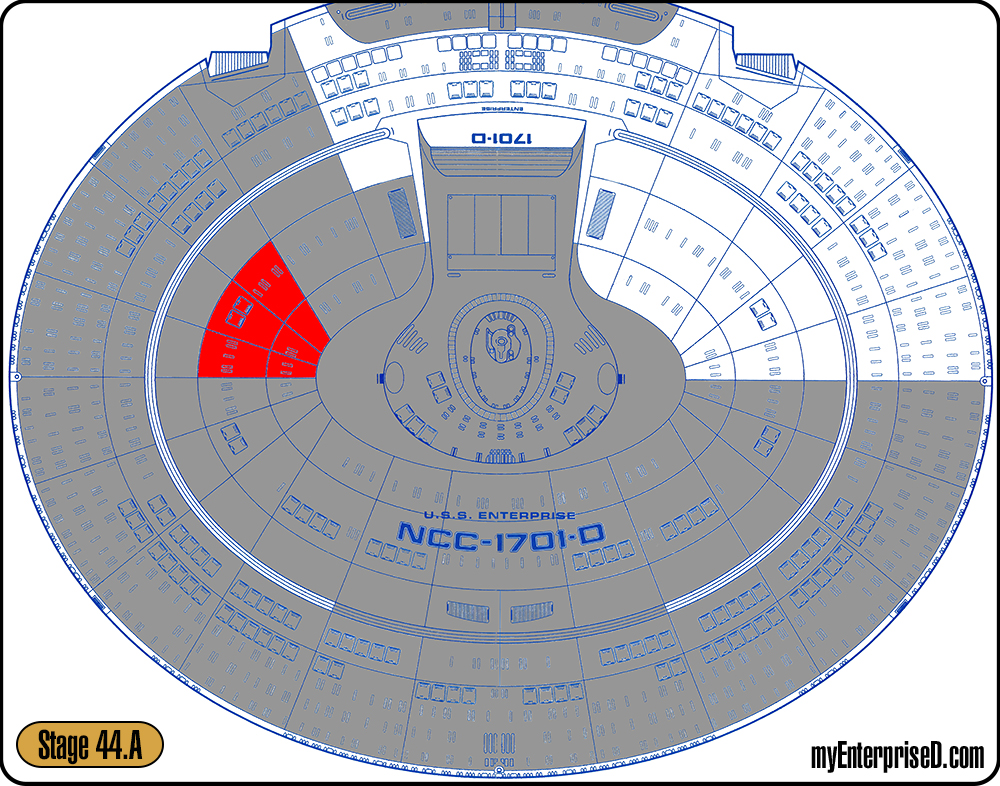 Carefully remove two (2) Escape Pod Covers, five (5) Clear Windows and nine (9) Dark Windows from their sprues and fit them into the back of Deck Panel U1-02, as shown. 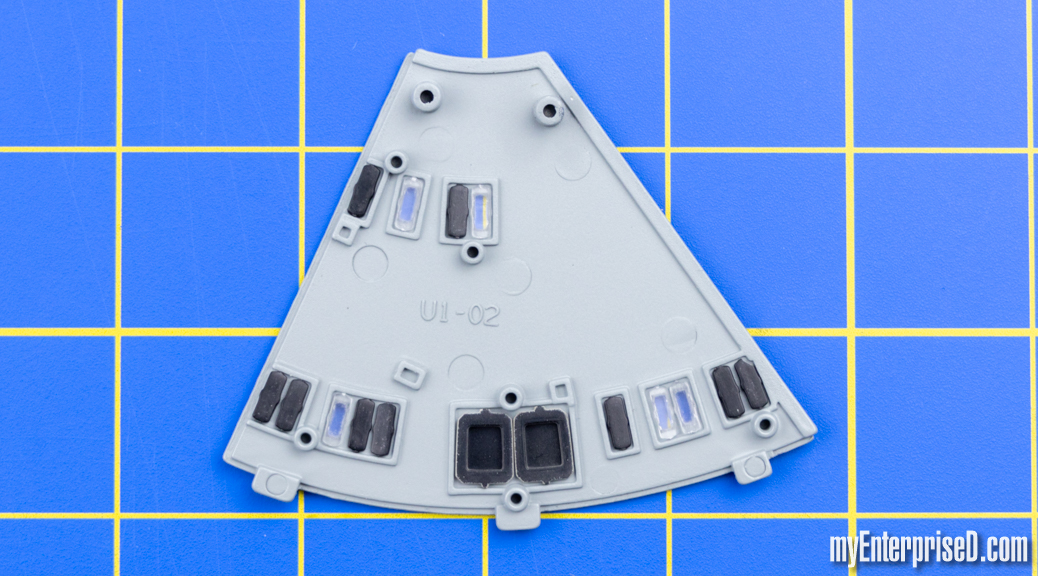 On my model, the Dark Window on the lower right of the panel was catching on a piece of the Deck Panel, so I cut the corner off with my sprue cutters: 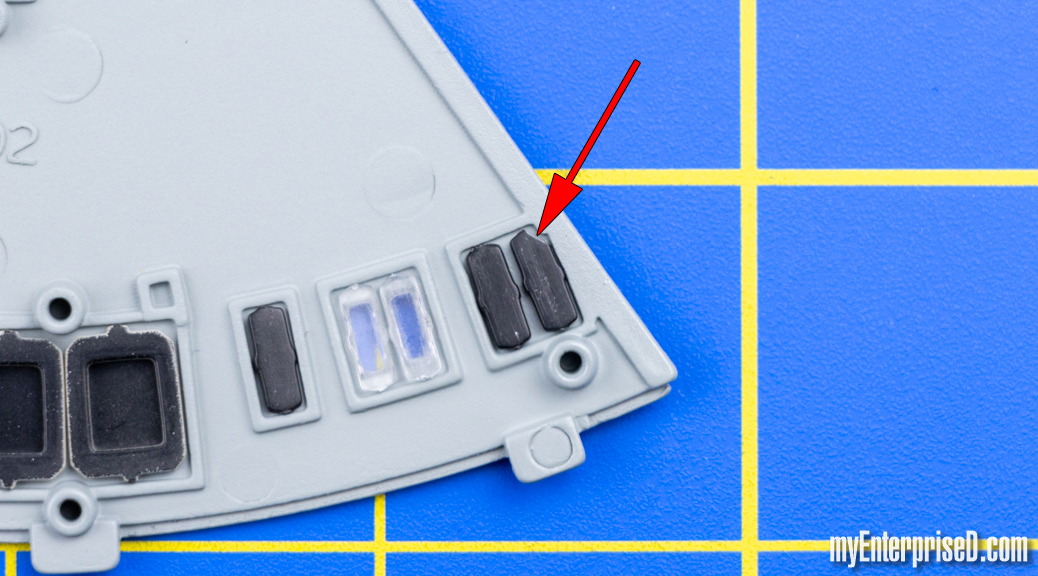 As before, I used pieces of black electrical tape behind the Escape Pod Covers and Dark Windows to reduce light leak: 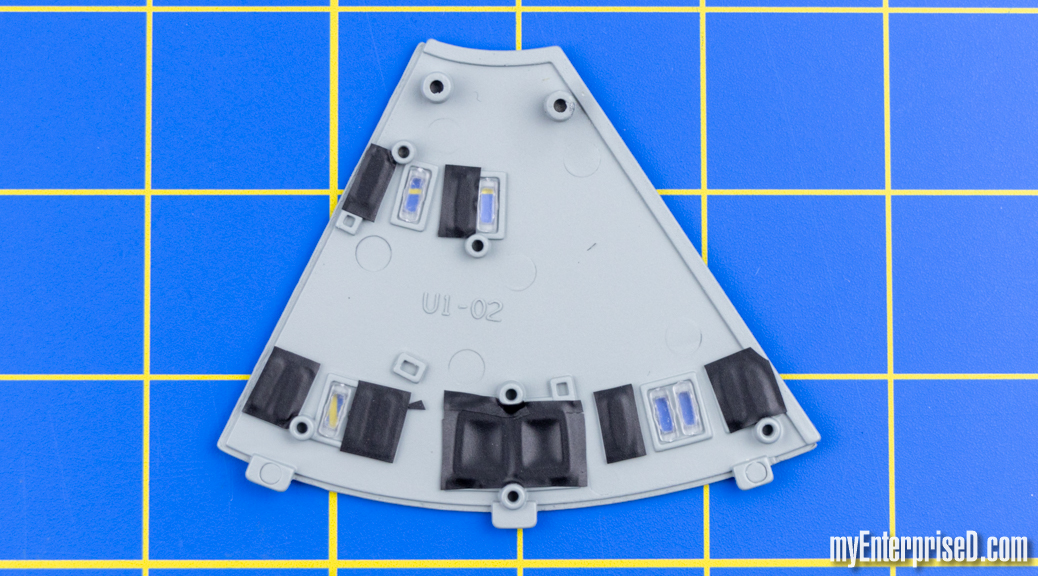 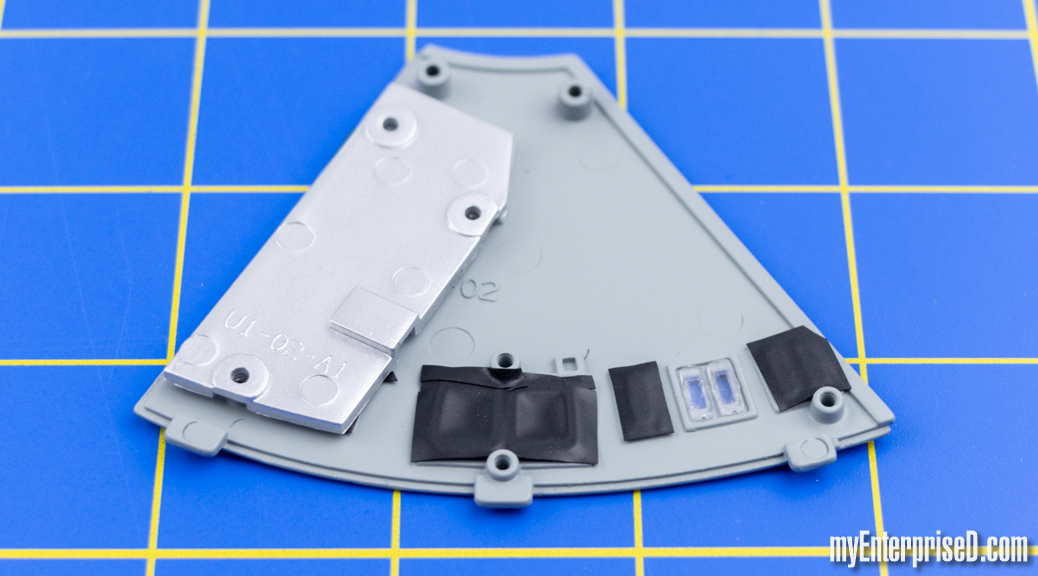 Slide one LED of the Deck Panel Lights cable into the notch of this Reflector Panel: 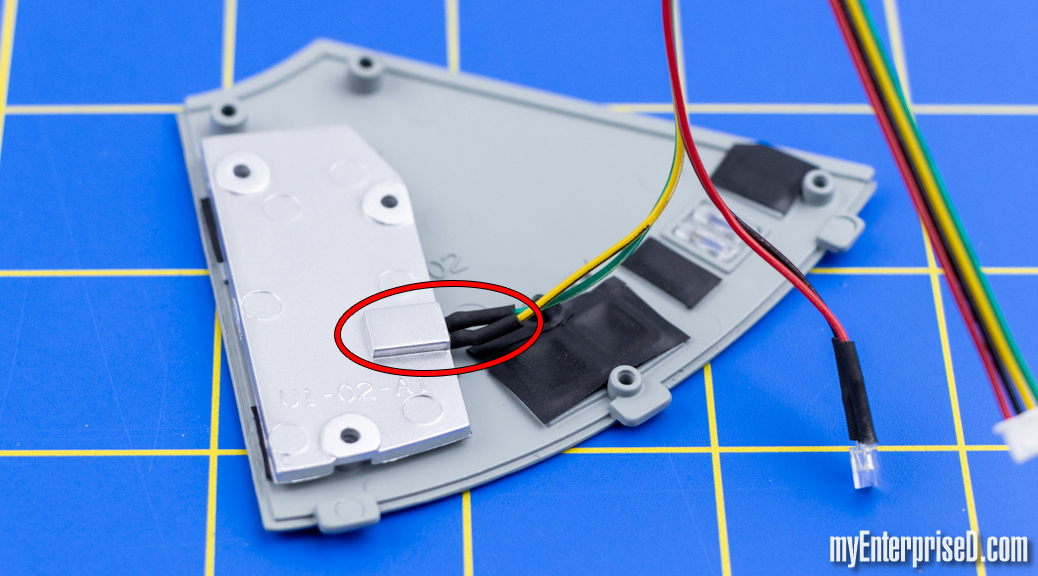 Secure this Reflector Panel to the Deck Panel with three (3) DM screws.

You may want to gently bend the leads of this first LED up a bit to make room for the second Reflector Panel. This is also your friendly reminder to try using 3-in-One Oil on all screws going into metal: 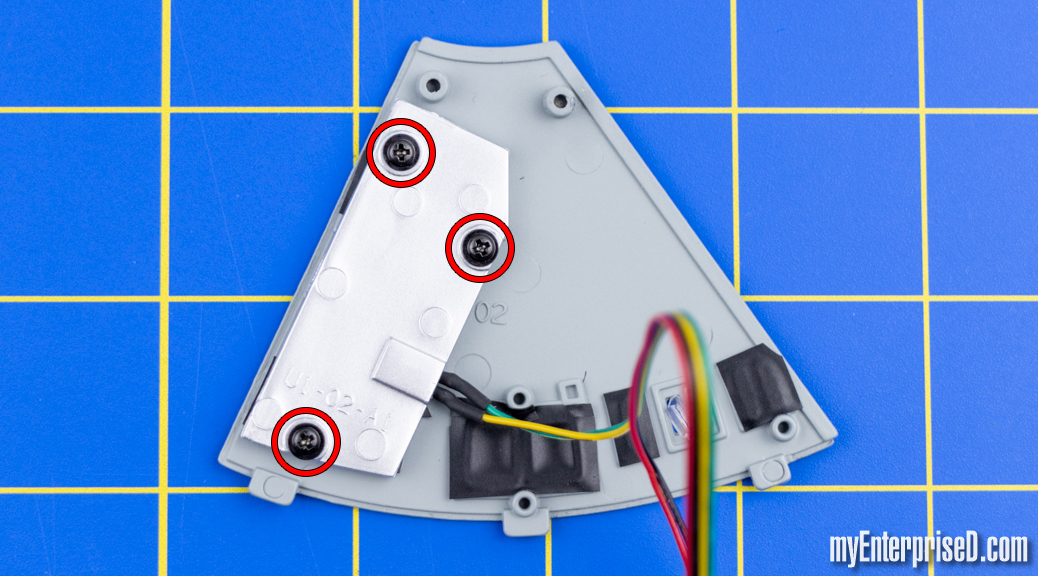 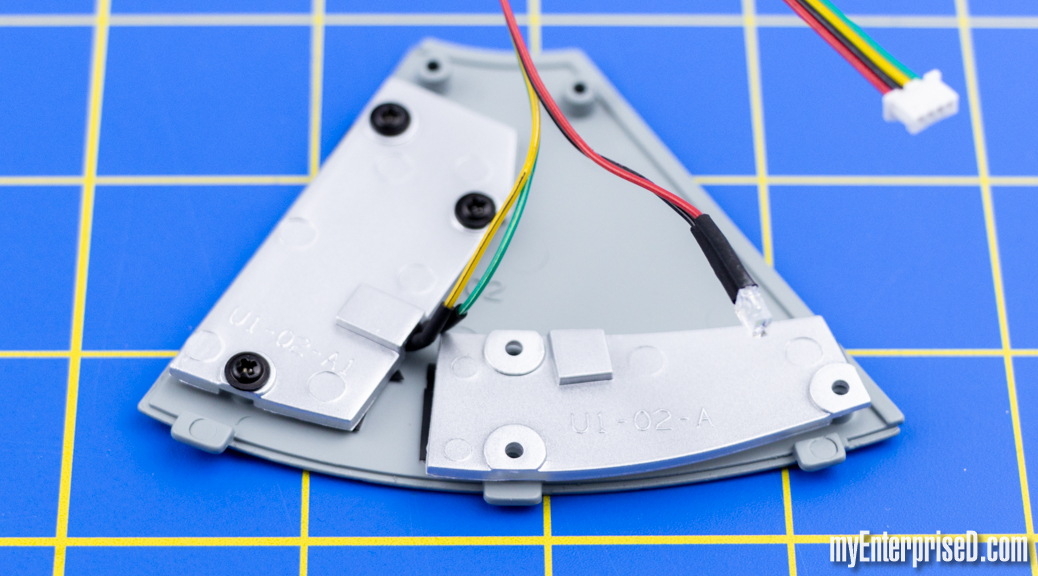 Slide the other LED of the Deck Panel Lights cable into the notch of this Reflector Panel: 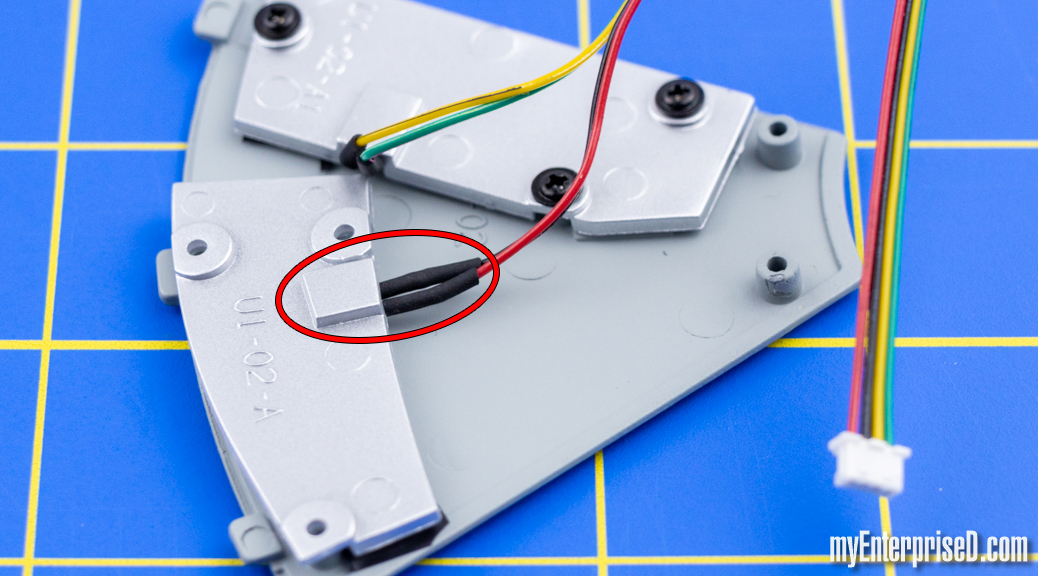 Secure this Reflector Panel to the Deck Panel with three (3) more DM screws: 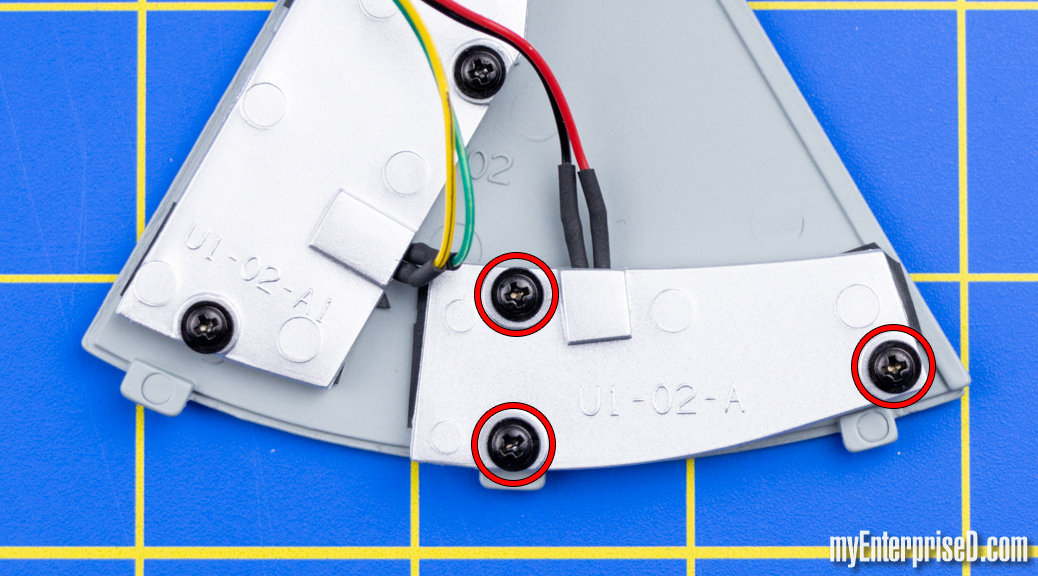 We can test these new window lights by connecting the new Deck Panel Lights cable to the PCB and Battery Box: 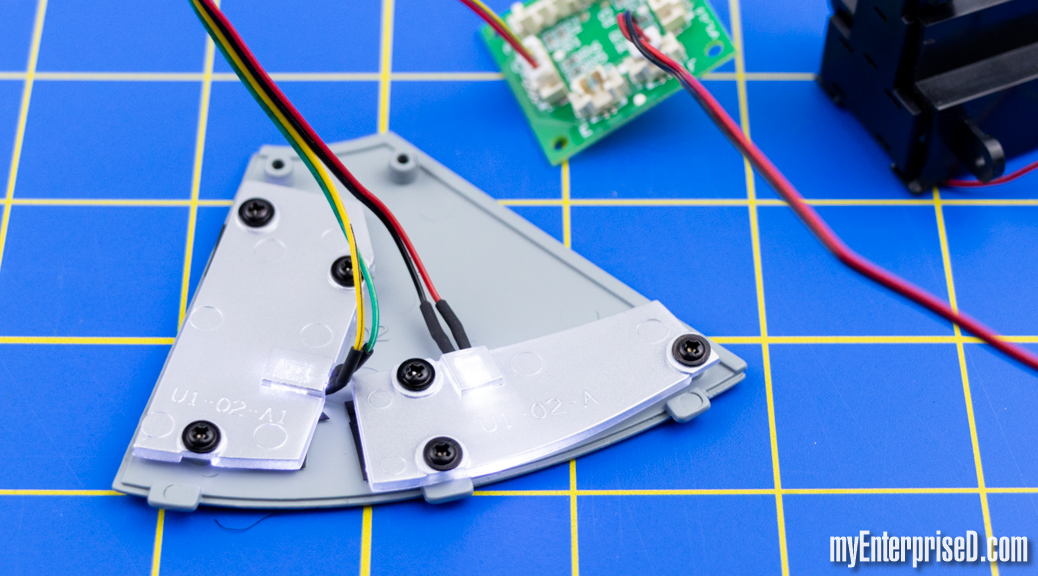 Retrieve your Upper Skeleton assembly from the previous stage and thread the Deck Panel Light cable of this new panel down through this opening, as shown. 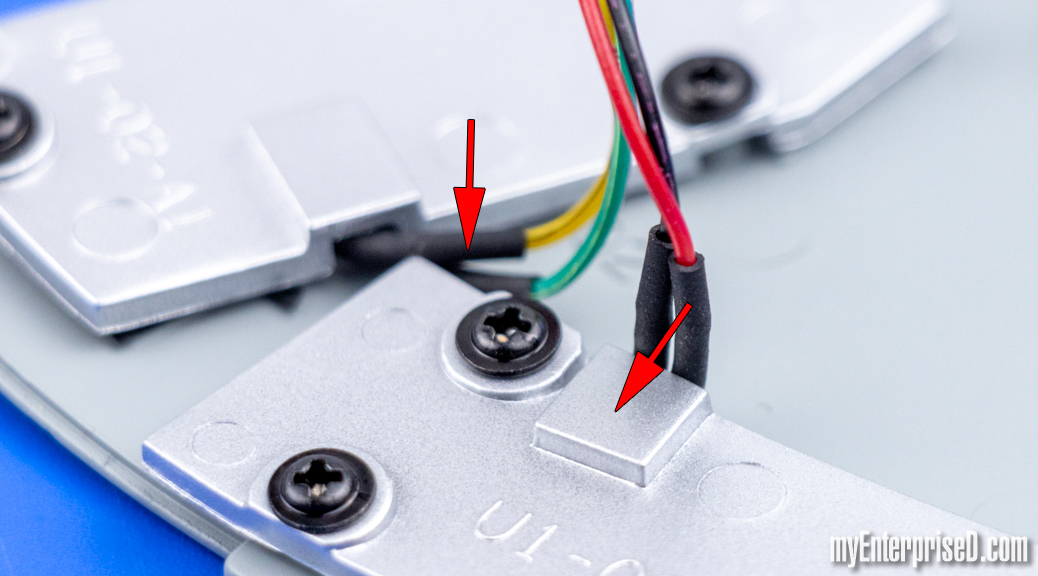 Then, I threaded the wiring through the skeleton: 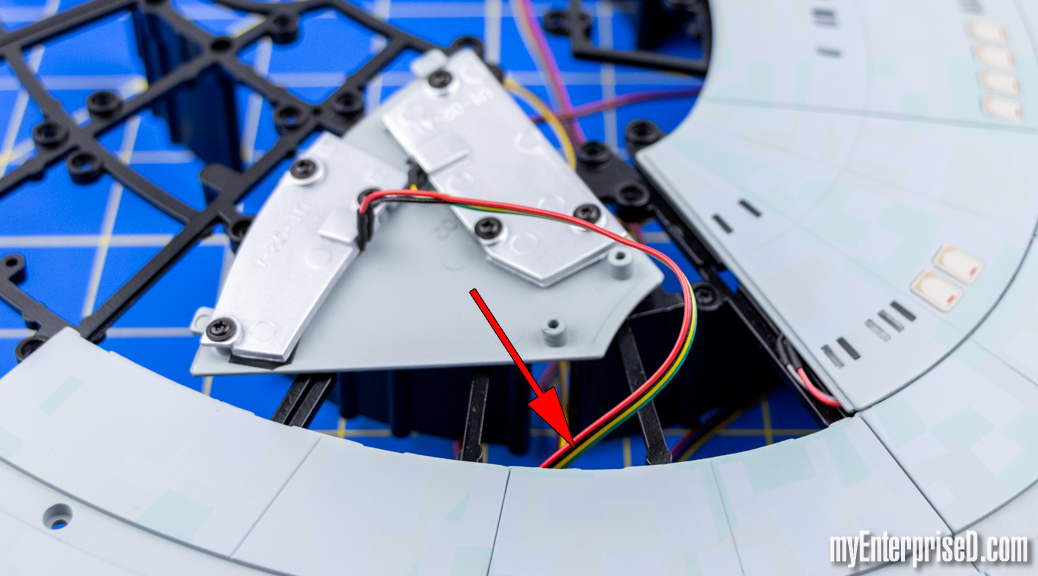 Position this Deck Panel onto the Upper Skeleton next to Deck Panel U1-03.

Be sure these three tabs along the lower edge of this panel slide underneath the outer panels first, as shown: 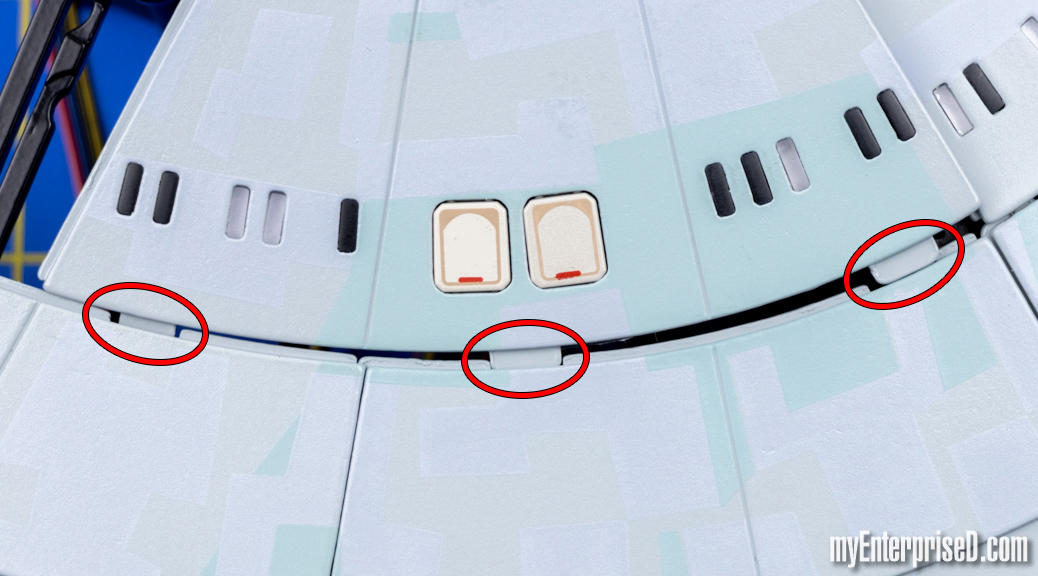 While holding this Deck Panel against the skeleton, secure the panel into place from below with two (2) BM screws.

This Deck Panel was one of the more troublesome to fit, so I temporarily loosened the outer/lower Deck Panels so the three tabs would slide under them easier. The screws circled in red below were the ones I loosened. Then, I made sure none of the LED wiring was caught between the panel and the skeleton, popped the panel into position easily, and secured it into place with the two BM screws (yellow circles): 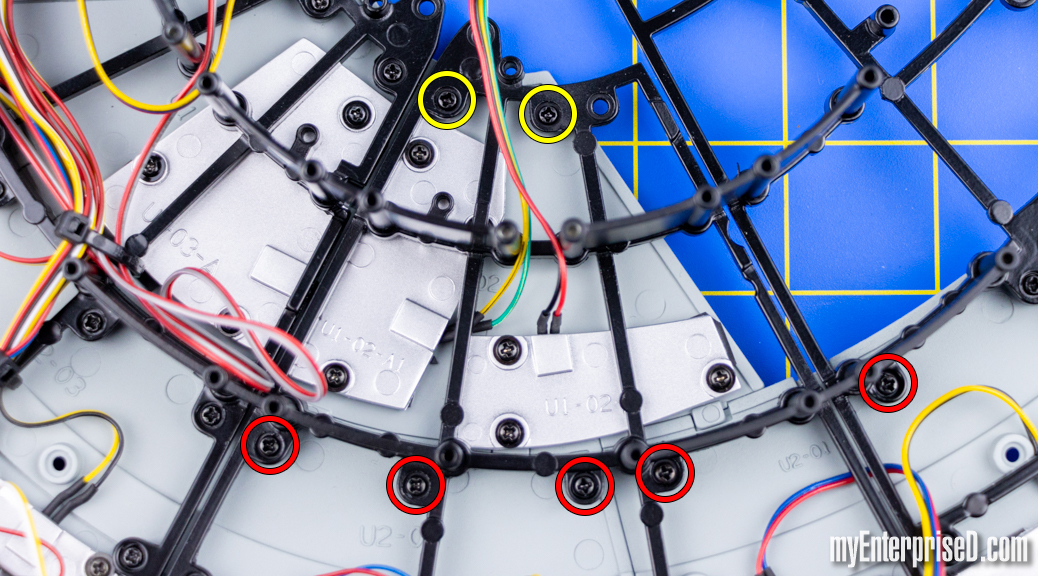 Be sure to tighten everything back up when you are happy with the fitment: 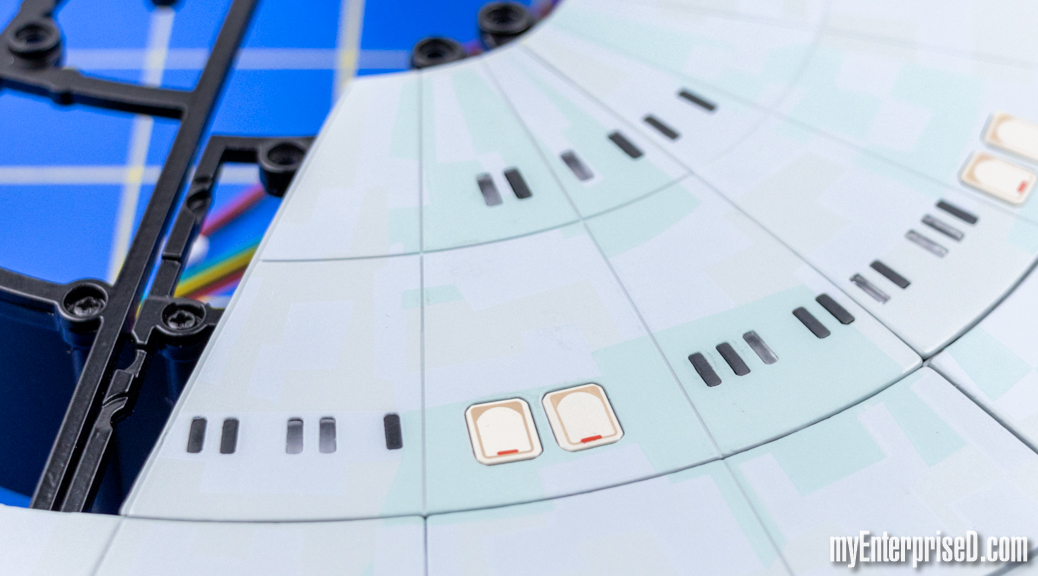 UPDATE: As I was building Stage 48, I found a nasty gap between these same panels on the other side of the saucer. On my model, it was also leaking a significant amount of light through the gap. During my investigation of that panel, I discovered that the screws (and the reflector panel to some extent) of these panels press on the skeleton frame causing the panel to ‘bend’ up: 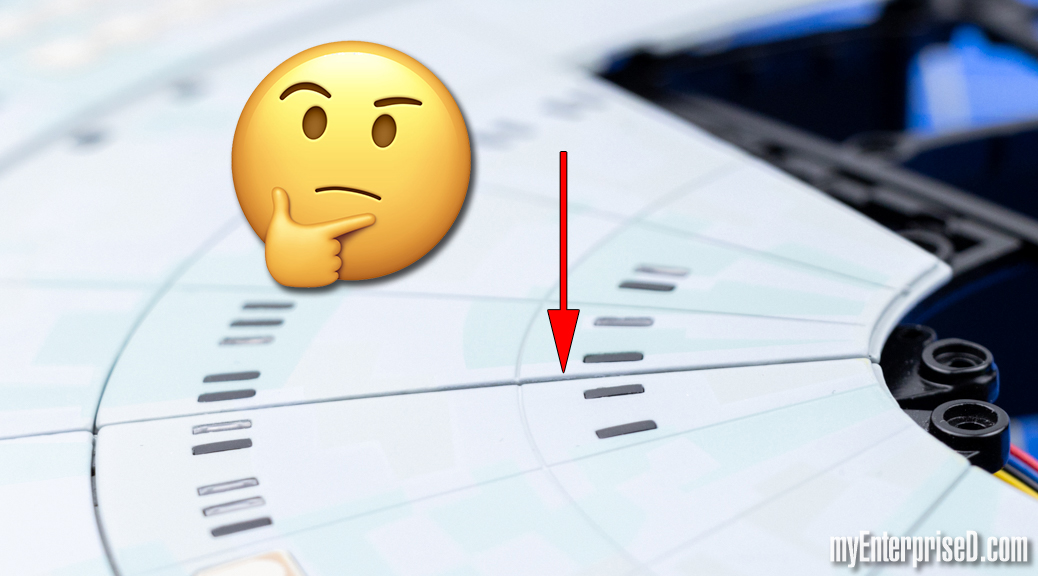 Luckily, the fix was not too difficult. First, I removed this new Deck Panel and swapped out the original EM screw for one of the new, smaller ones: 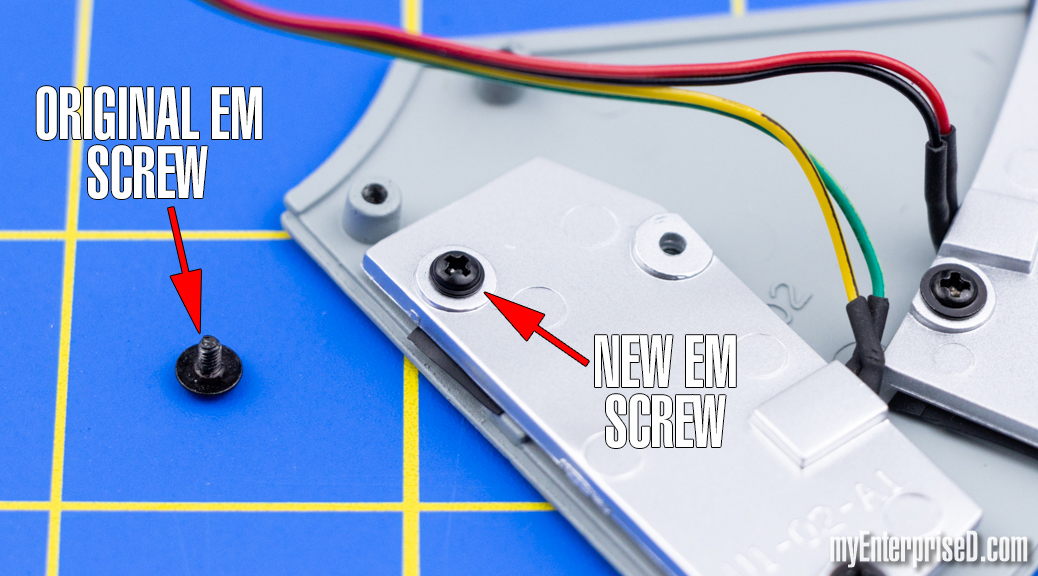 I also removed this EM screw from the U1-02-A1 Reflector Panel. The other two screws hold the reflector in place just fine: 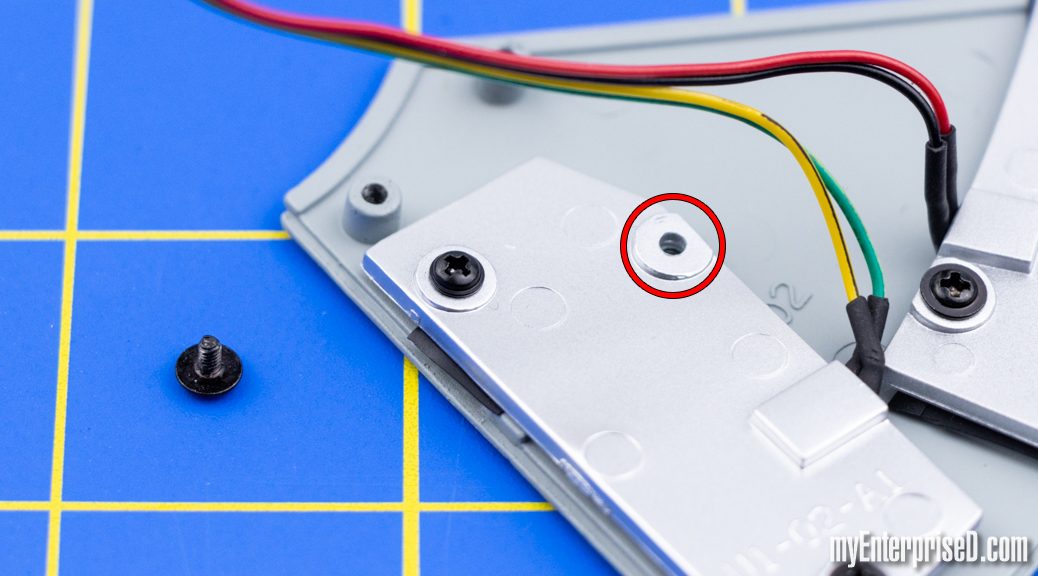 Then, I used my sprue cutters to cut off the edge of the raised circular section under the new EM screw, like this: 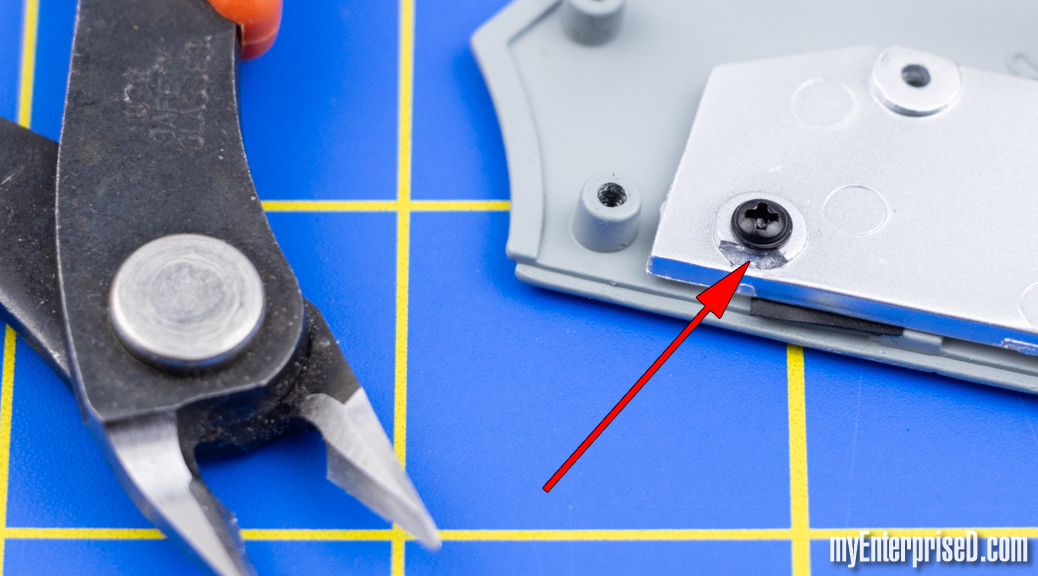 I then reinstalled this Deck Panel. Just three small modification let this panel sit down on the skeleton without the terrible bend or gap. Much better! 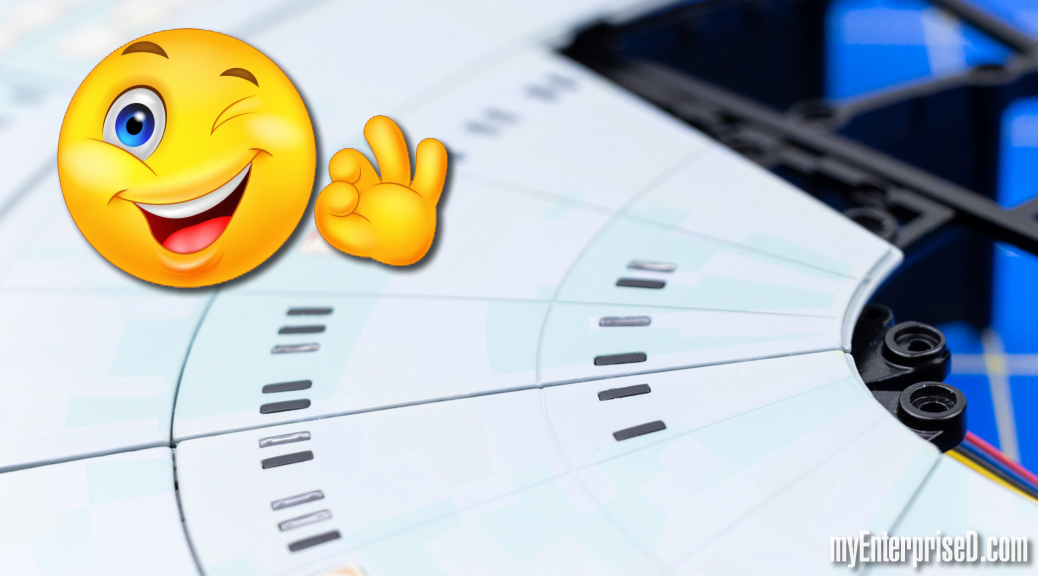 Retrieve your Battle Neck Section from the previous stage. Press the five pins of the Left Lower Neck Panel into the matching holes at this location until it the panel is flush.

Since I will likely update the lighting of this Battle Neck Section, I need to be able to disassemble it later on. Therefore, I did not push these Neck Panels all the way in just yet: 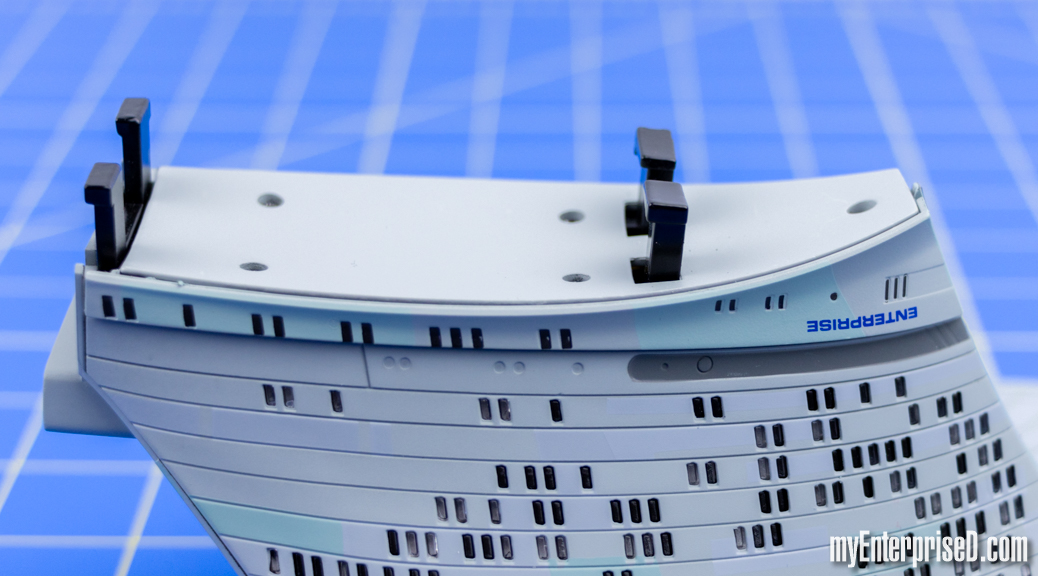 On the other side, press the five pins of the Right Lower Neck Panel into the matching holes at this location until it is flush as well.

For the same reason I stated, I did not seat this panel in all the way so it can be removed later: 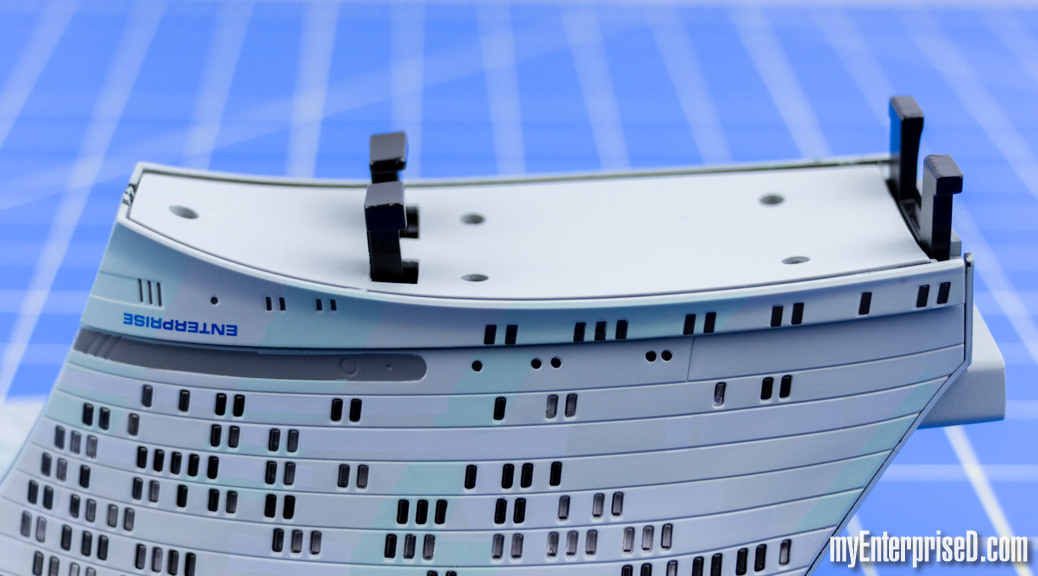 I believe that is it for the construction of our Battle Neck Section! Soon, we will begin construction of the main Battle Section that this assembly will attach to. Those stages will also include the lower saucer skeleton and hull panels, so I am ready for it!