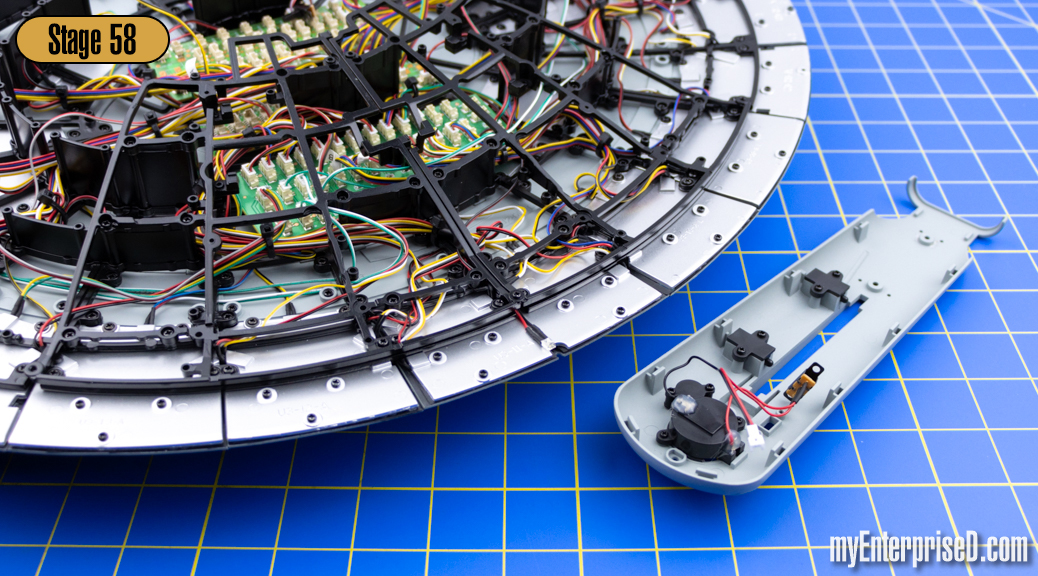 “Spring back into action on your port warp nacelle, fit five formation light LEDS, and add another large section of the lower saucer skeleton.“ 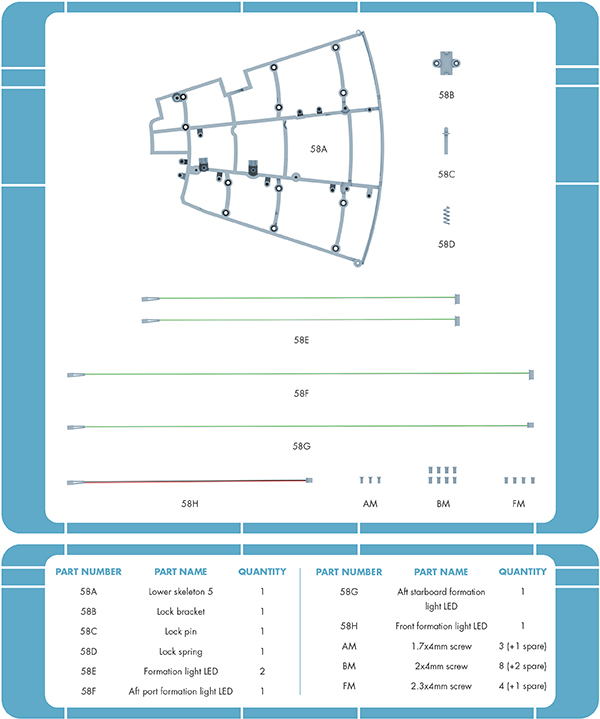 Materials: The Lower Skeleton 5 and Lock Spring are metal. The other non-electronic parts are plastic.

As in the previous stage, slide the Lock Spring onto the longer end of the Lock Pin, as shown: 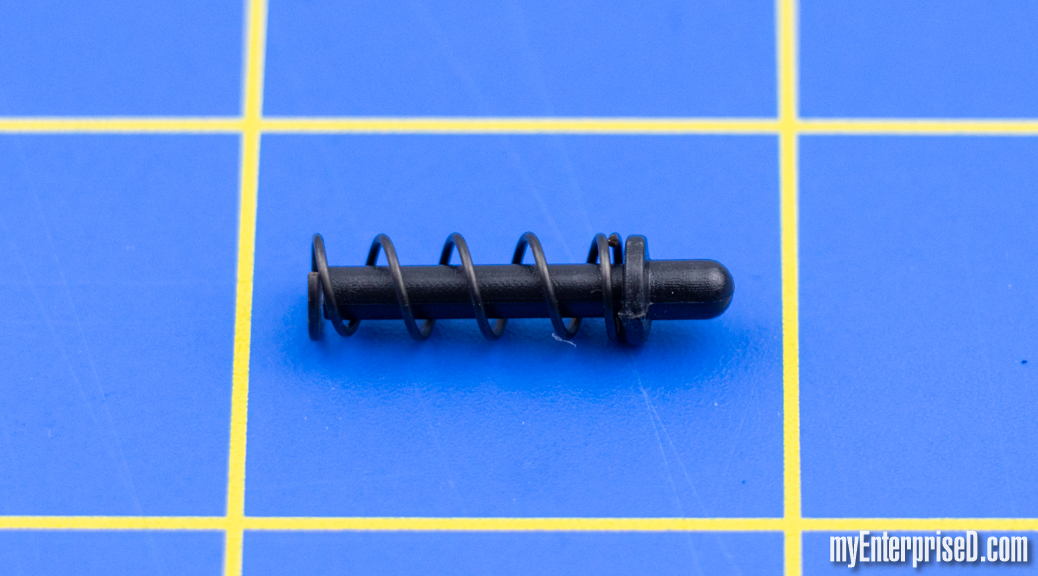 Retrieve your Nacelle Lower assembly from the previous stage. Fit the Lock Pin assembly into this housing closest to the Battery Box. Be sure the flange of the Lock Pin is inside the housing and facing the center of the nacelle, as shown.

You may need to compress the Lock Spring a bit to slide this assembly into the housing: 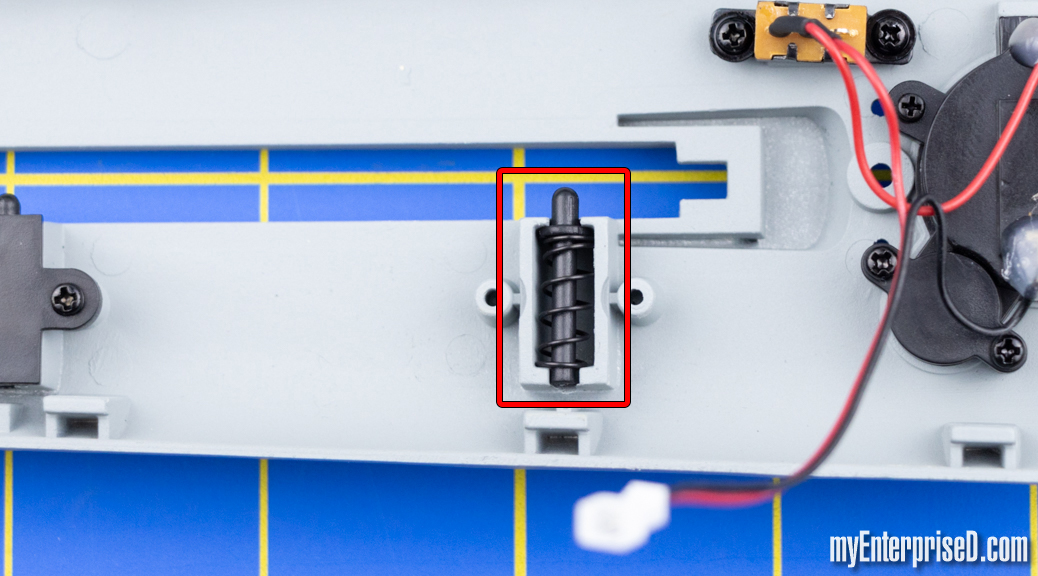 Cover this Lock Pin assembly with the Lock Bracket and secure it into place with two (2) AM screws.

Once this is secure, you should be able to push the exposed end of the Lock Pin into the housing. If not, check for any obstructions to the movement of the pin. This is also your friendly reminder to try using 3-in-One Oil on all screws going into metal: 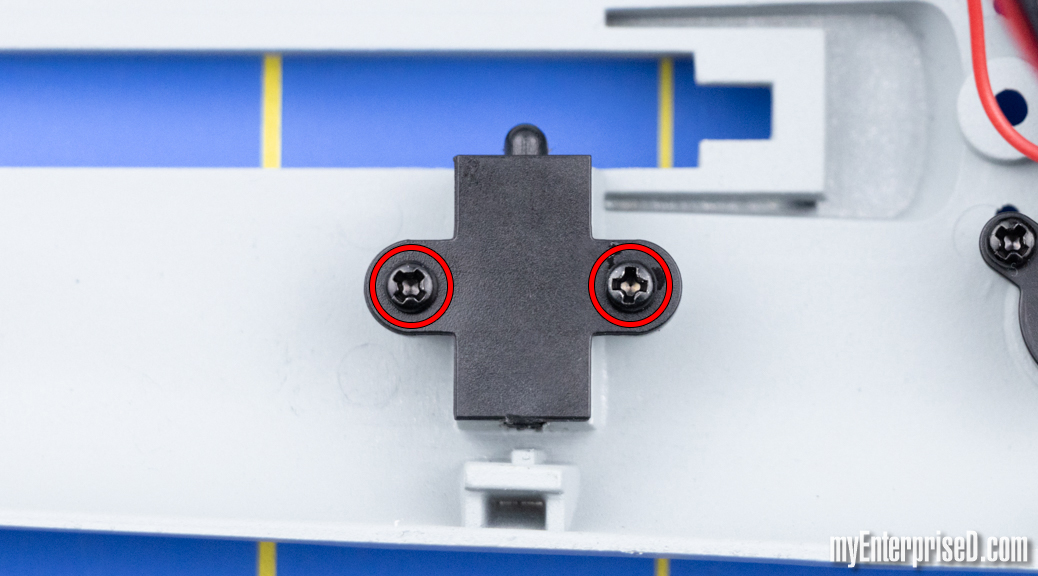 Connect the plug of the Front Formation LED into a socket marked ‘B’ on Saucer PCB 1.

The Front Formation LED is the shortest cable found in this stage: 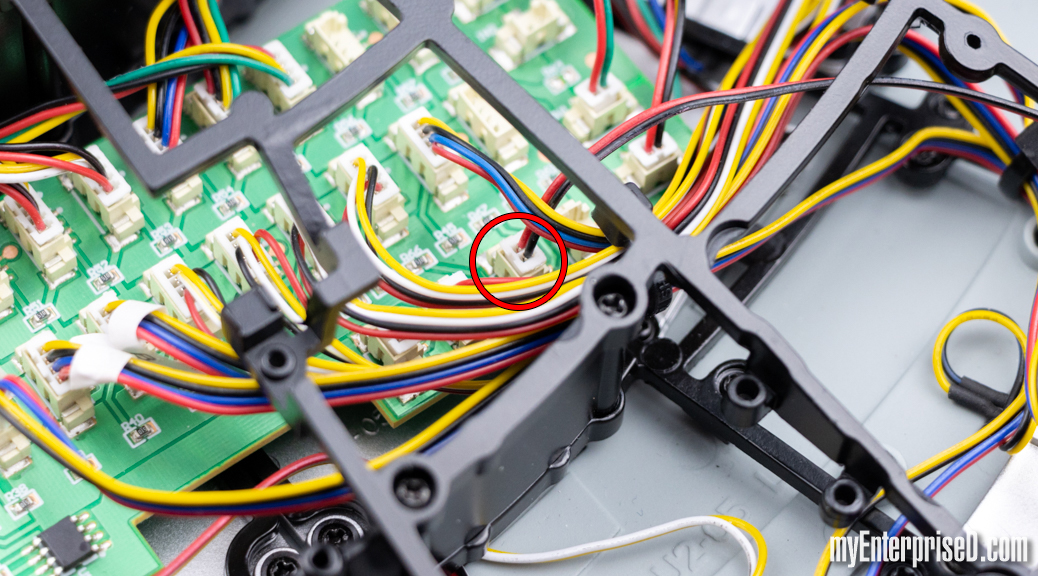 Thread the LED of the Front Formation LED through the Upper Skeleton towards the front center of the saucer, as shown: 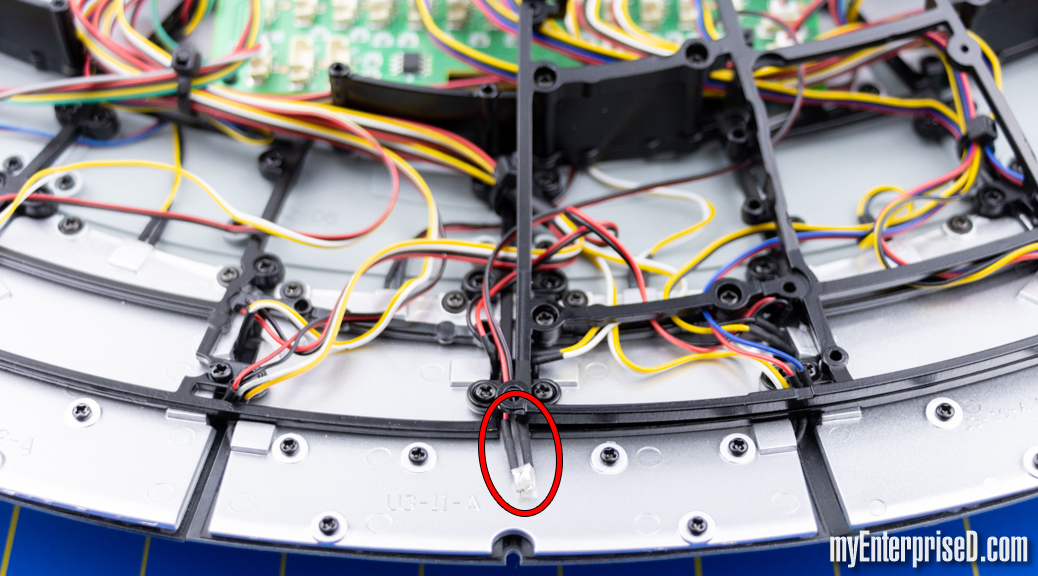 Connect the 4-pin plug of the Aft Port Formation LED into the larger of the two sockets marked ‘W’ on Saucer PCB 1:

The Aft Port Formation LED is one of the two long cables in this stage, but has a 4-pin plug on it: 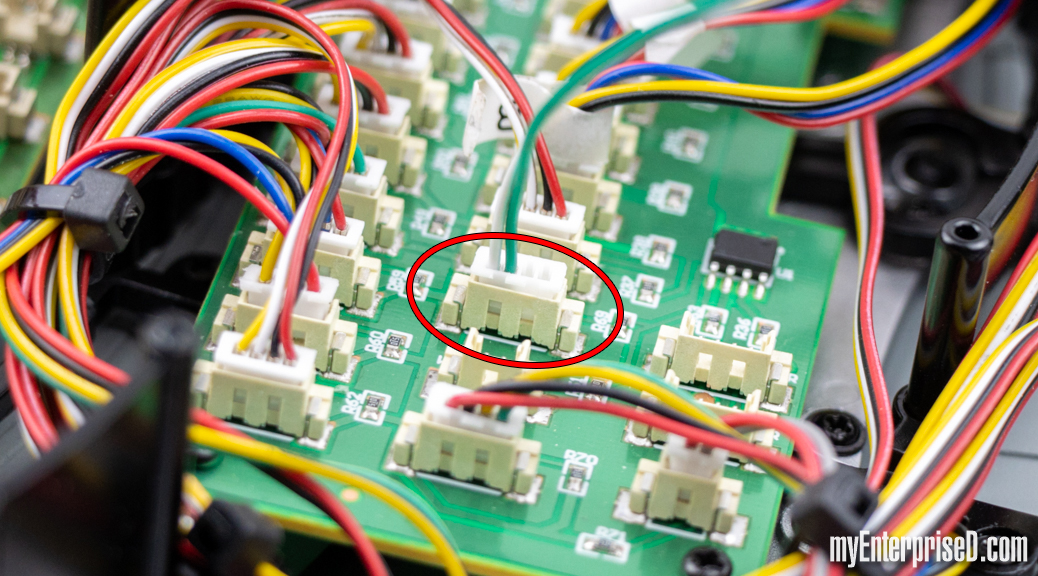 Thread the LED of the Aft Port Formation LED through the Upper Skeleton towards the left rear of the saucer, as shown: 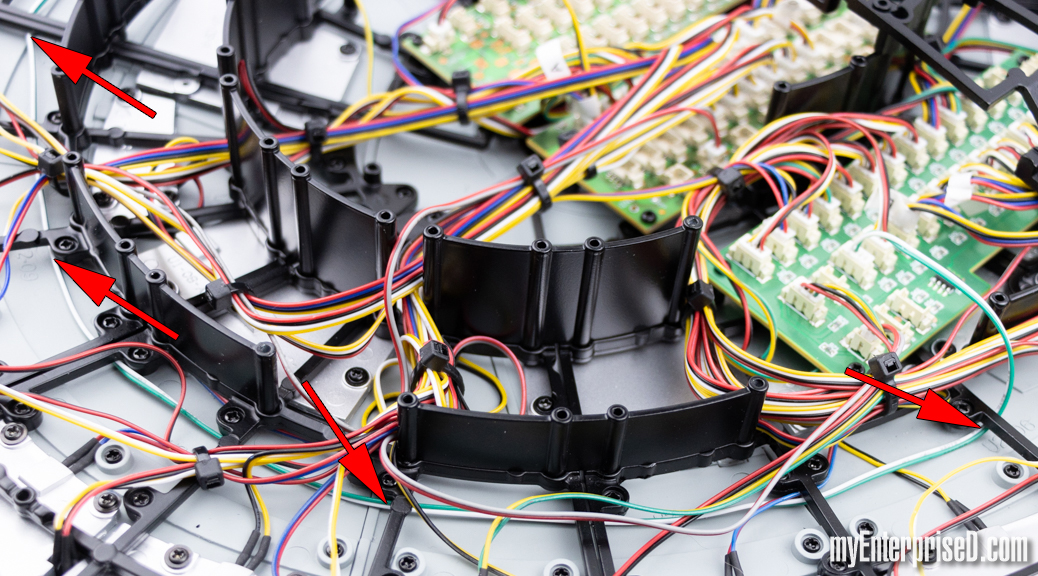 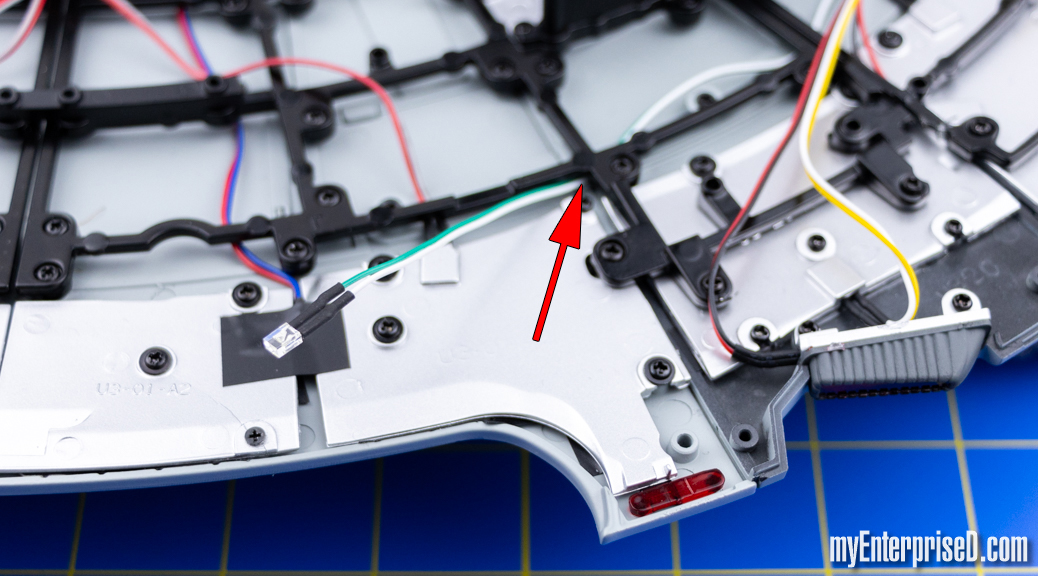 In the same way, connect the 2-pin plug of the Aft Starboard Formation LED into the smaller of the two sockets marked ‘W’ on Saucer PCB 1.

The Aft Port Formation LED is the other long cable in this stage and has a 2-pin plug on it: 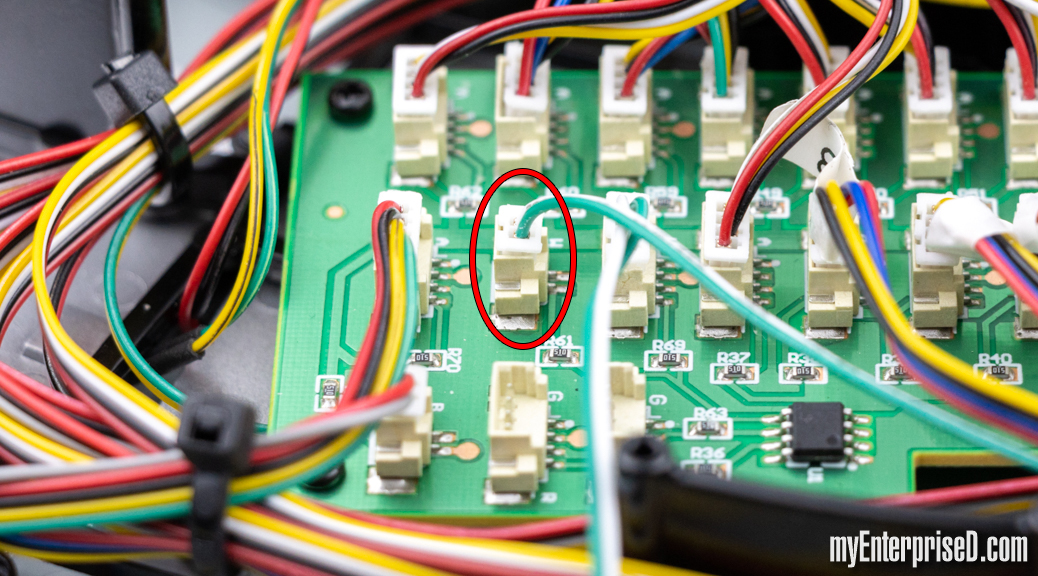 Thread the LED of this Aft Starboard Formation LED through the Upper Skeleton towards the right rear of the saucer, as shown: 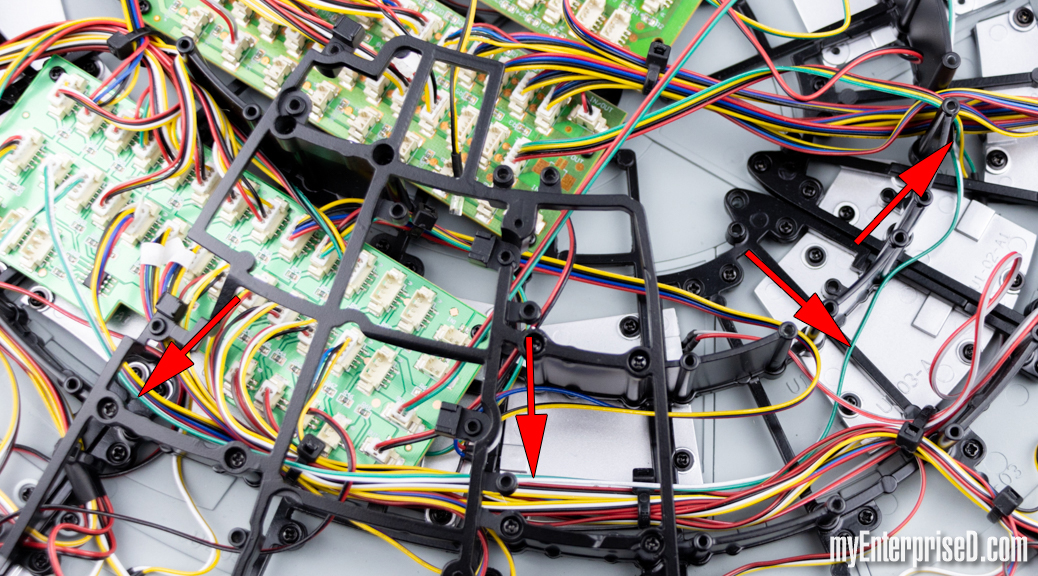 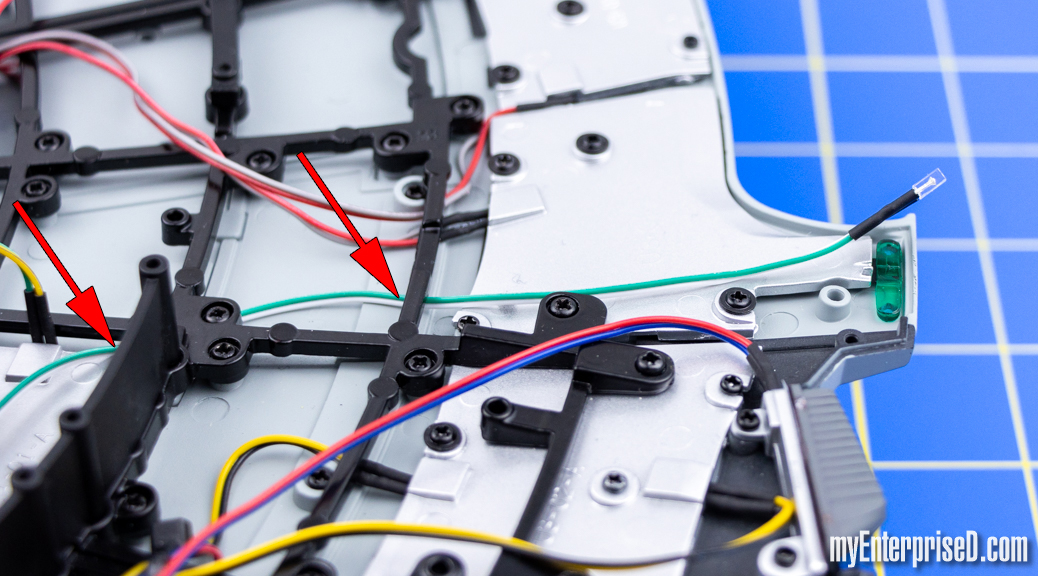 Connect the plug of a Formation Light LED to one of the sockets marked ‘G   R’ on Saucer PCB 1.

The two remaining Formation Light LED cables are the same so either one can be used here: 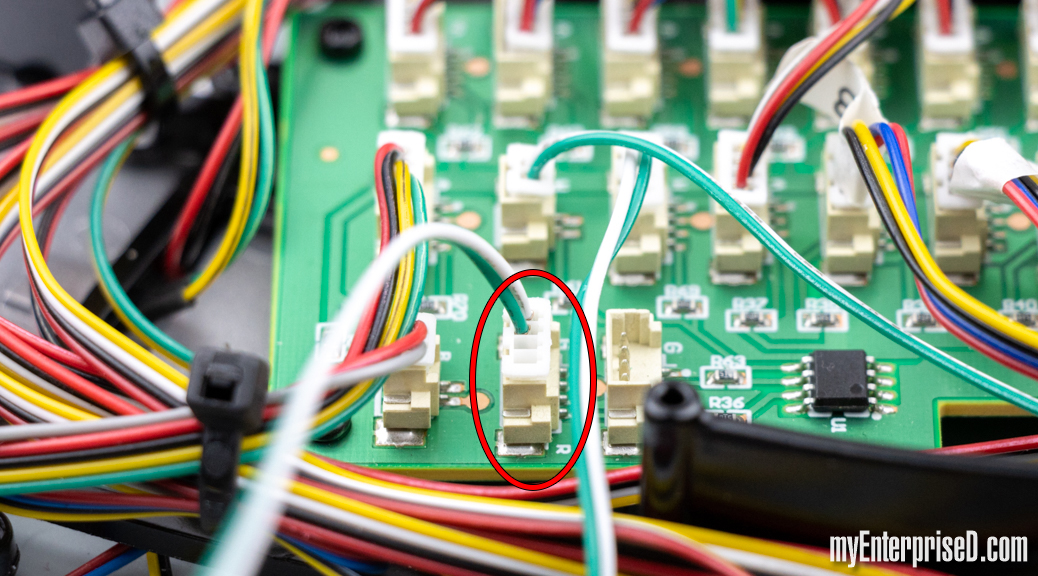 Thread the LED of this Formation Light LED through the Upper Skeleton towards the left (port) edge of the saucer using the same path as the earlier Aft Port Formation LED, as shown: 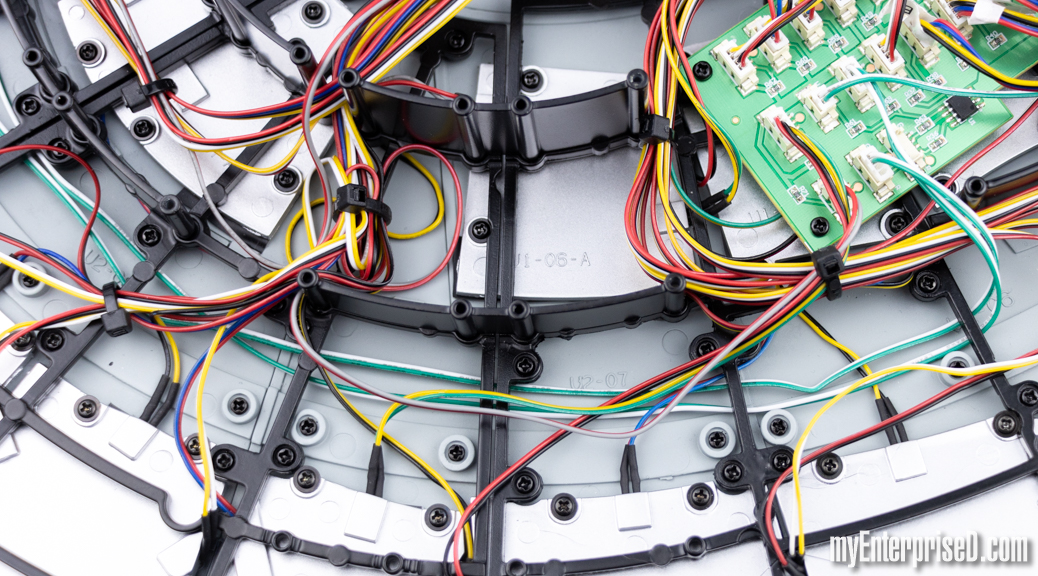 This LED should end up near the notch in the leftmost (port) edge of the saucer: 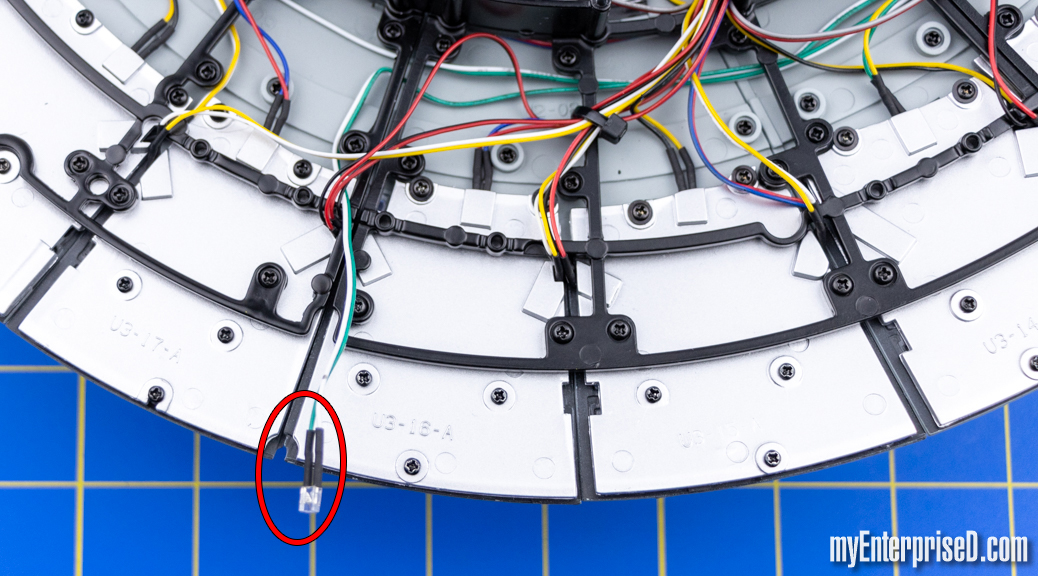 Connect the plug of the remaining Formation Light LED to the other socket marked ‘G   R’ on Saucer PCB 1: 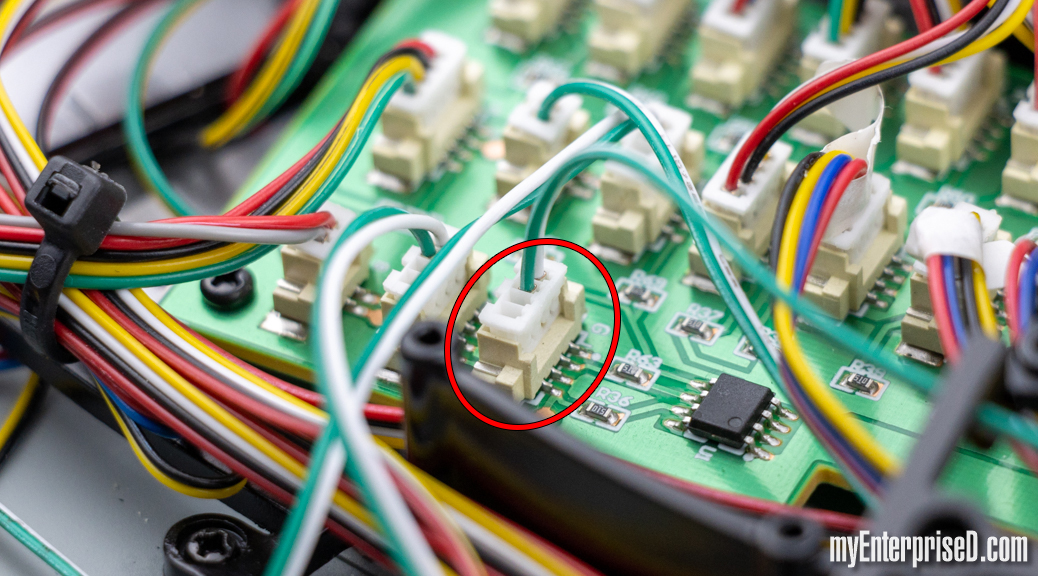 Thread the LED of this Formation Light LED through the Upper Skeleton towards the right (starboard) edge of the saucer using the same path as the previous Aft Starboard Formation LED, as shown.

This LED should end up near the notch in the rightmost (starboard) edge of the saucer: 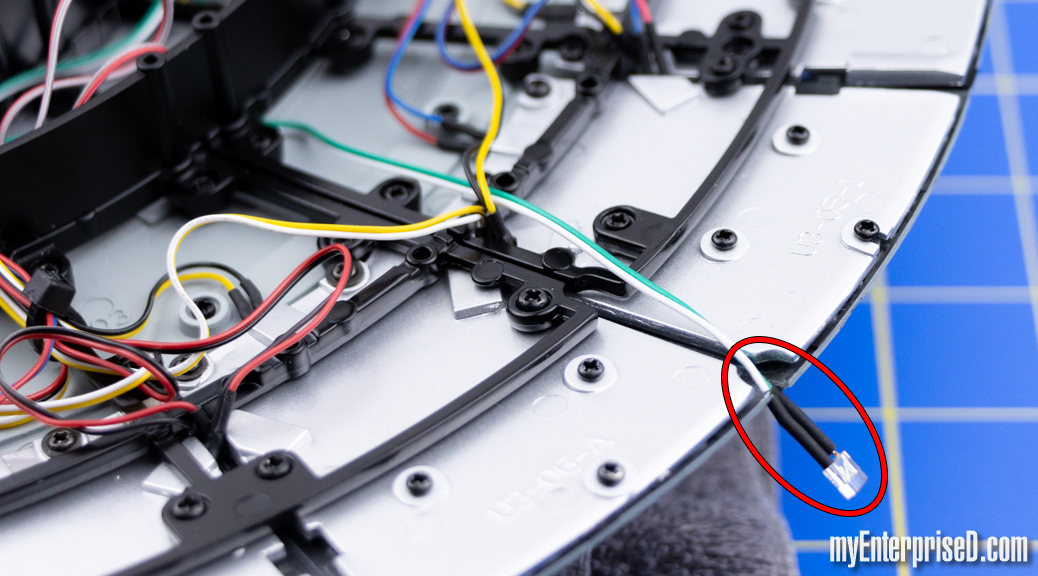 Adding to the Lower Saucer Skeleton 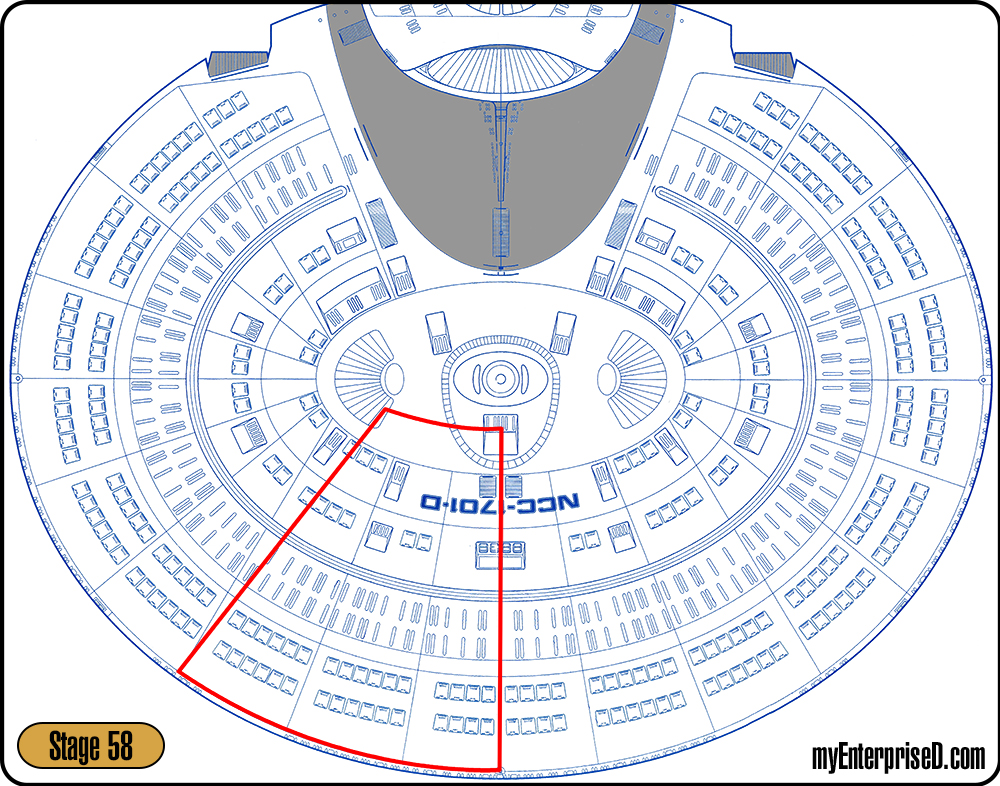 Fit Lower Skelton 5 to the underside of the saucer next to Lower Skeleton 4.

First, make sure the Front Formation LED wiring is safely routed under the forward screw hole of Lower Skeleton 4 and leading straight back, as shown: 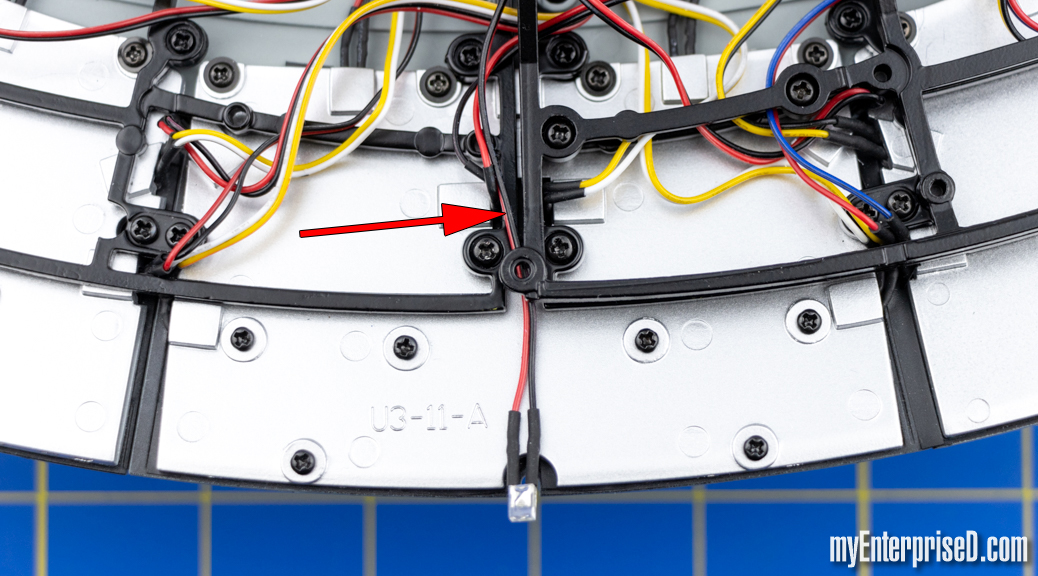 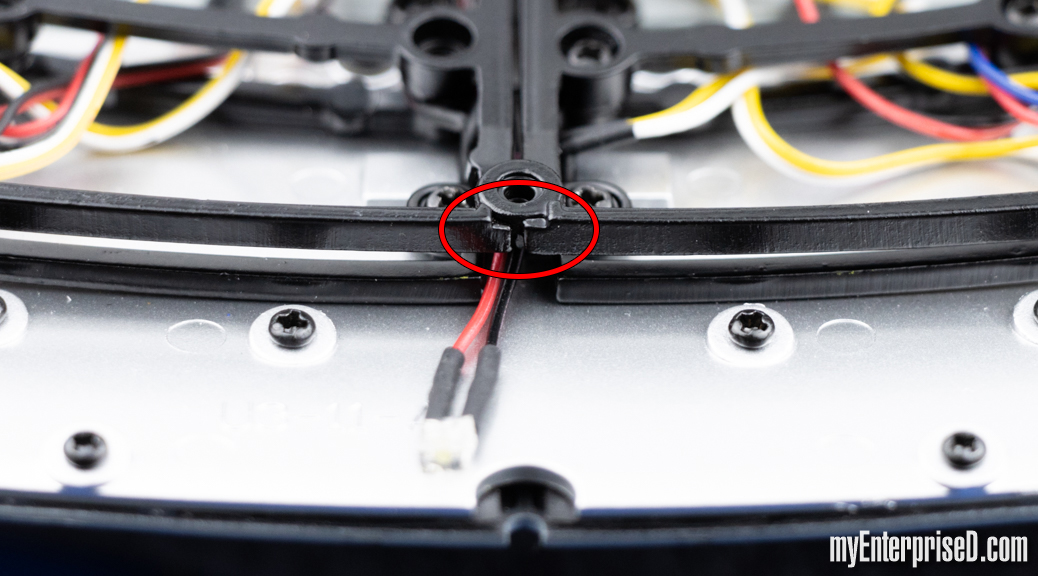 Finally, Lower Skeleton 5 can be fitted down onto the matching screw posts of the Skeletal Supports, as shown: 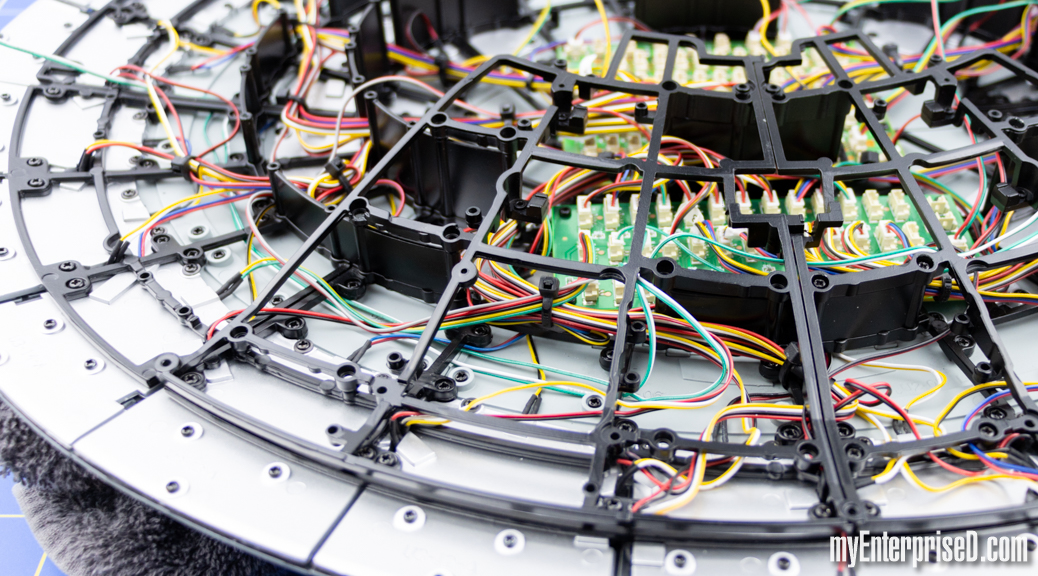 Being securing Lower Skeleton 5 to the Skeletal Supports with eight (8) BM screws: 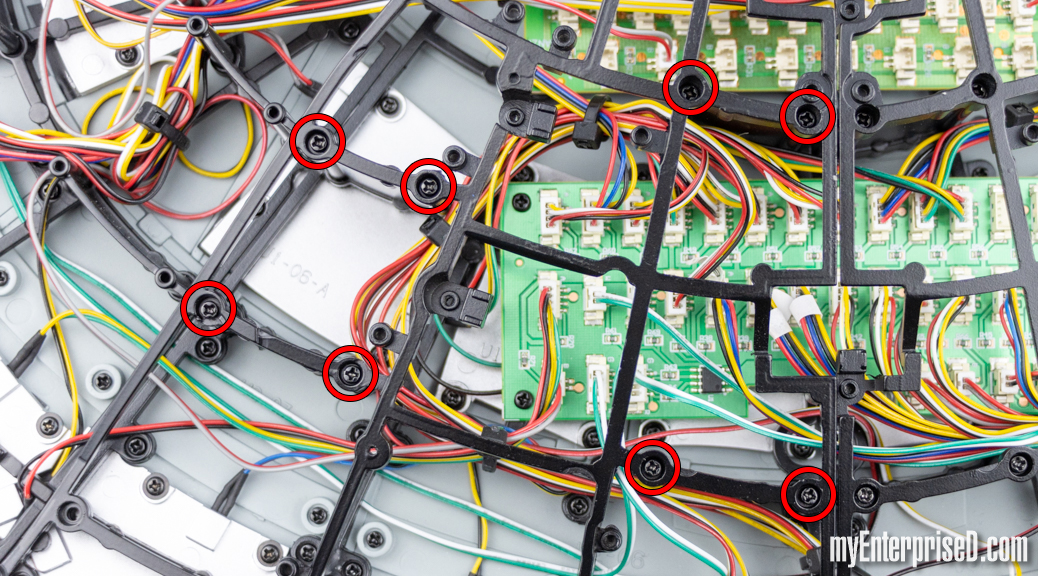 As with the previous Lower Skeleton frame, make sure the outer saucer wiring is safely routed through the gap between the frames (arrows below): 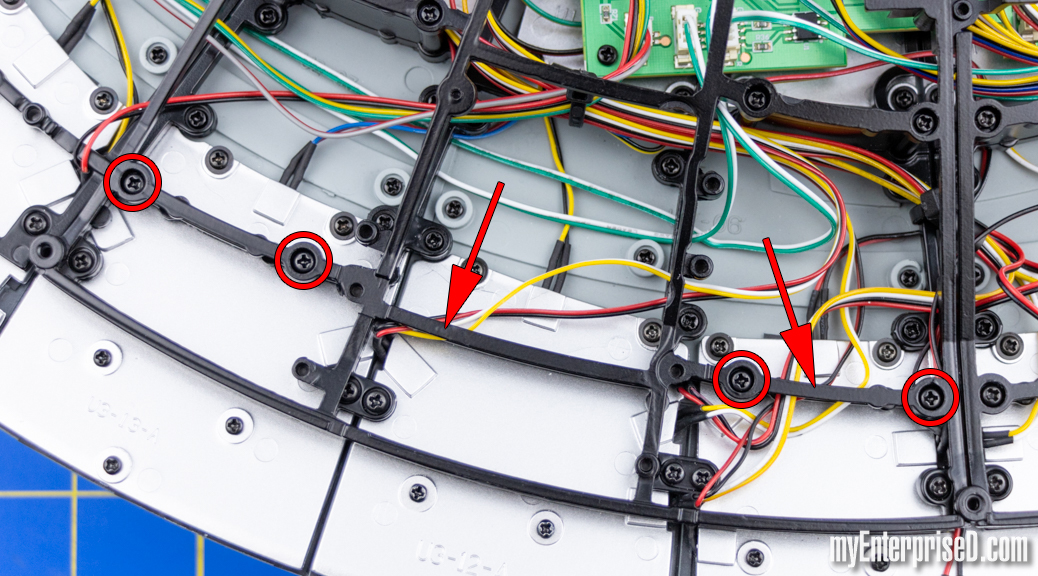 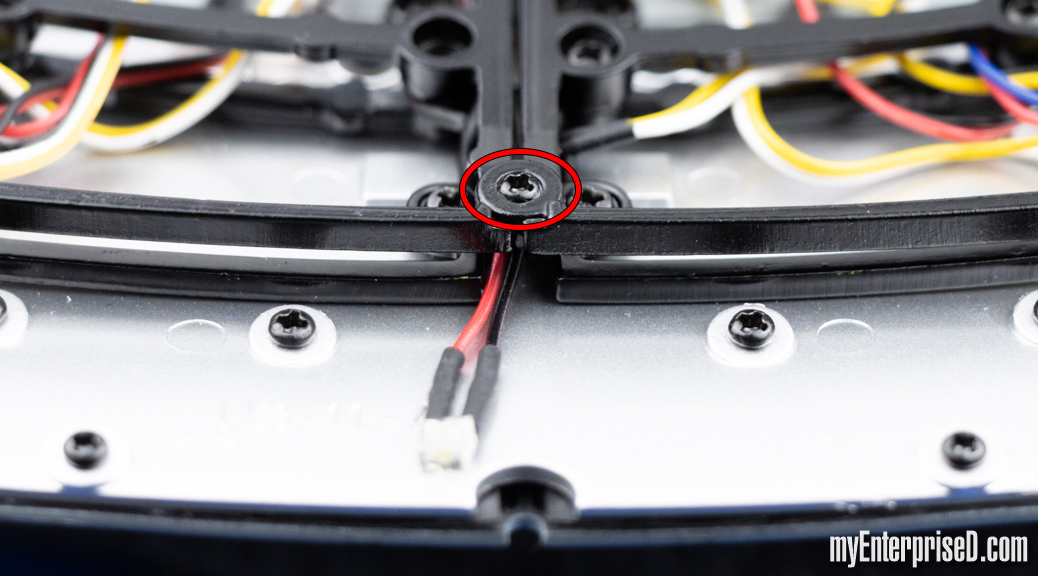 Slide the Saucer Power Switch to the ON position. The Front Formation LED should stay lit steady, while the side and rear Formation LEDs should blink in unison. 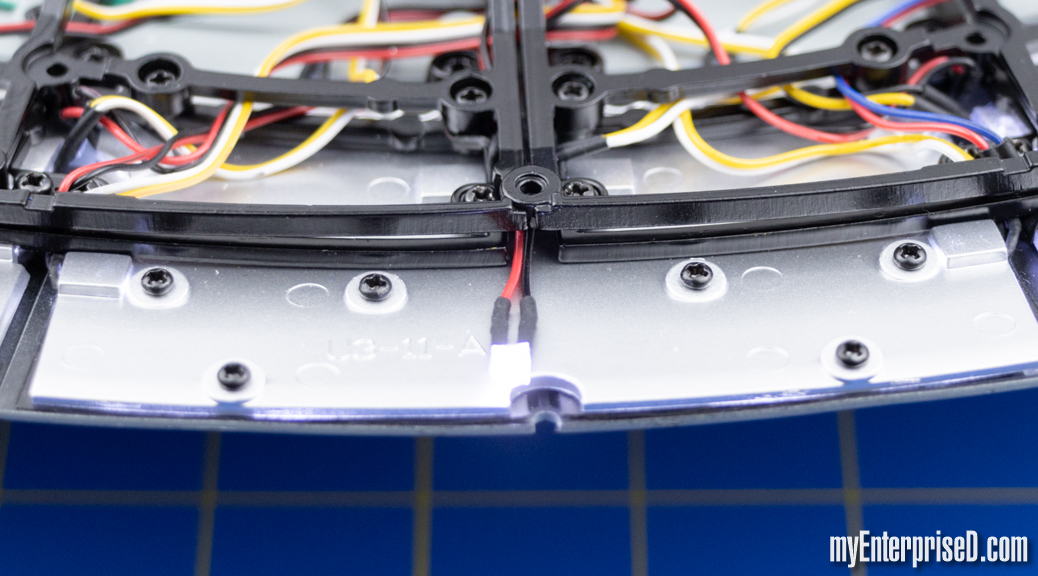 … the rest of the Formation LEDs are blinking in unison. This is not accurate to the studio models, nor to aviation/naval lighting design in general: 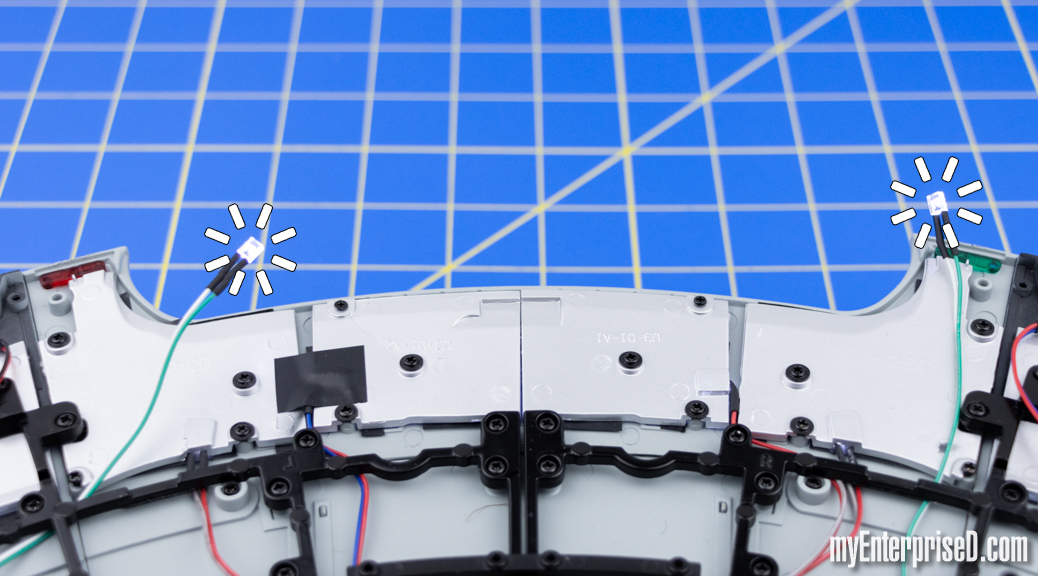 I am happy that the formation lights are included, but the blinking just does not work for me. I am now fully convinced I need to redo all of the wiring and lighting on my Enterprise D model. All stages from this point on will include a custom modified power/lighting system, but I will still do my best to show how the provided model is assembled for those builders who want to keep the stock lighting.