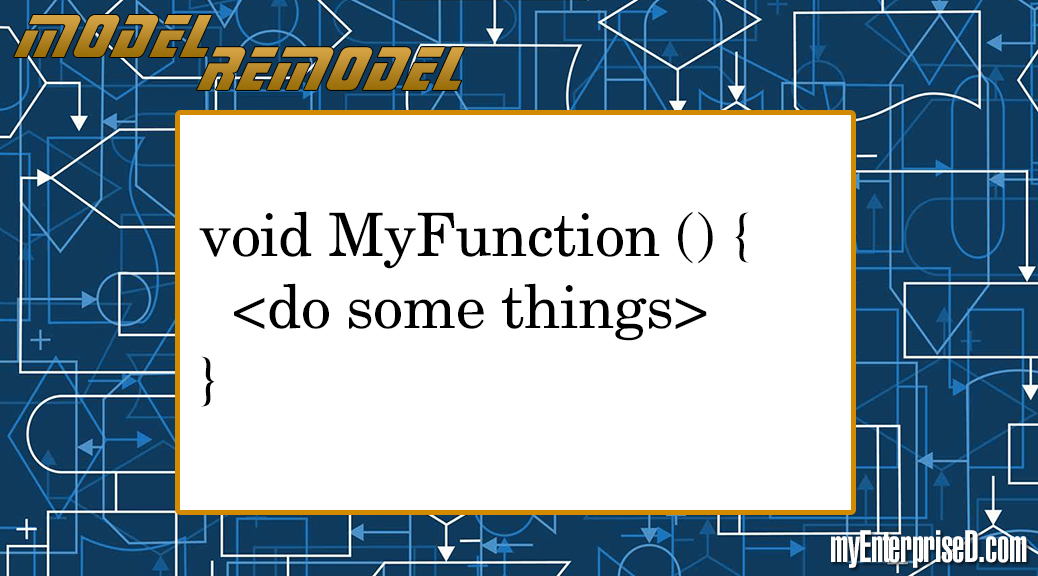 Why should we use Custom Functions?

As we add more and more code to an Arduino sketch, we will invariably run into situations where we use the same sections of code over and over again with only minor changes. These situations can be a perfect reason to utilize Custom Functions. These functions can not only shorten your sketch and save memory space, but they can also make managing your sketch easier.

If we look at the sketch we have been writing so far, we will find we have some repetitive code in there. As I highlighted below, the only difference between these two sections of code is the LEDPin and LED2Pin variables:

We can replace these two sections of code by calling a Custom Function. Functions are self-contained chunks of code that can be called (executed) by other code. The nice thing about these functions is that we can send them data, and if necessary, get data back. The format of a Custom Function is simple:

The ‘void’ modifier means that this function will not return any values – it will just execute the code between the { and the }. While the ( and ) after the function name are required, the optional ‘parameters’ fields inside them are used to capture data sent to this function and declares them as local variables for use inside this function. Unlike the global variables we have been using up to this point that can be used anywhere in the sketch, once this function code completes these local variables are deleted.

If we wanted to use a Custom Function to replace the ‘LED state change’ code I highlighted above, we could create something like this. I named my function changeLEDState, but you could name it whatever you want:

Here, I declared a byte local variable named Pin within the parameters field. When we call this function from our main code, we will send it the byte value of the LEDPin or LED2Pin global variable. Within this function, we can then use that value as the Pin local variable.

We can then replace the previous code inside the loop() function by calling this new function, as shown.

NOTE: Custom Functions like this one need to be placed outside the setup() and loop() functions, typically at the bottom of your sketch.

This is the beauty of functions. We could call this new changeLEDState function from many different places in our sketch and only need one line of code each time (instead of five). Just imagine if we had ten different LEDs to control with our previous code, without this function that would be 50 lines of code! There would be a heck of a lot of copy/pasting and tons of repetitive code which is just wasting memory space. This is what makes using Custom Functions a great solution to keep in mind.

To help others, I have shared this sketch via the Arduino Editor. Simply click the Open Code or Download buttons!

Returning a Value with a Function

I do want to explain what we should do if we wanted a Custom Function that did something and returned a value when finished. For example, let’s say we wanted to send two numbers to a Custom Function, have it add them together, and give the sum back to us. For this, we cannot use the ‘void’ modifier as need to declare what variable type of data the new function will return.

Here, I expect the returned data to be an integer so I changed the modifier from ‘void’ to int. I also plan to send integer values to this function, so I declared two integer local variables x and y inside the parameter field.

NOTE: Multiple parameters need to be separated by a comma:

This code would call our myDoublingFunction and send it the values of 2 and 3. The function itself would then assign these values to its local variables x and y, add them together, and return the value of x + y which is 5. This value of 5 would be assigned to the sum variable for use elsewhere in the code as needed.

While using Custom Functions is entirely optional in Arduino sketches, there will be situations where they are very helpful. For the most part, I create them anytime I find myself using the same chunks of code three or more times.