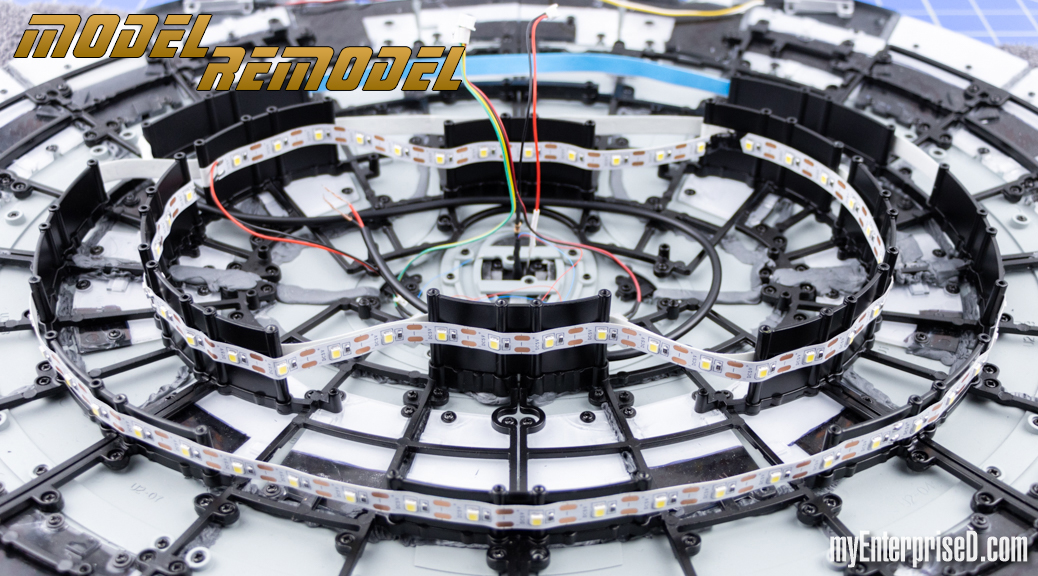 This page is part of my Model Remodel series of articles.

Now that the upper saucer has been tested for light leaks, we can begin installing the lighting inside the saucer. This includes the LED Strip, the Bridge/Deck Two lights, the Impulse Engine lights, and the Formation lights.

To light the windows, I bought a Two-Pack of 1 meter 5V DC USB LED Light Strips in Daylight White (6000K). I cut the USB plug off each one leaving about 12″ (30cm) of cable left connected to the strip. This strip has an adhesive on the back that is exposed by removing the backing paper. Starting with the end of the strip where the cable is attached, I started securing the strip at the midpoint of this Skeletal Support: 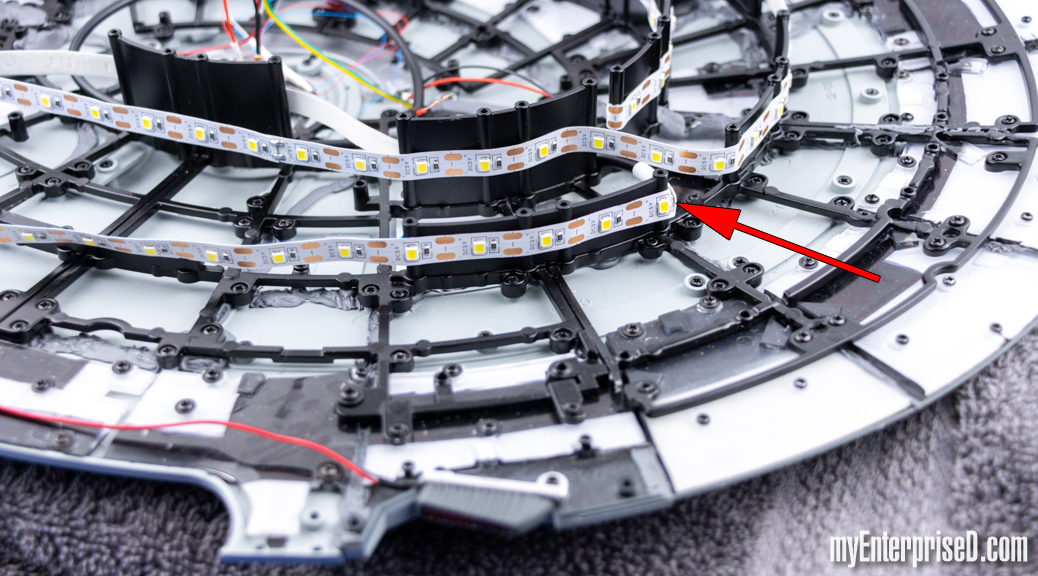 As I began to secure the LED Strip around the outer surface of these smaller Skeletal Supports, I made sure to leave a little extra slack in this rear center section of the Saucer. This is where the Battle Section Neck will need to fit and I do not yet know how much space there will be at this area. Just in case, I wanted to allow this part of the strip to be folded towards the upper saucer surface (to be able to light the rear saucer windows and Arboretum): 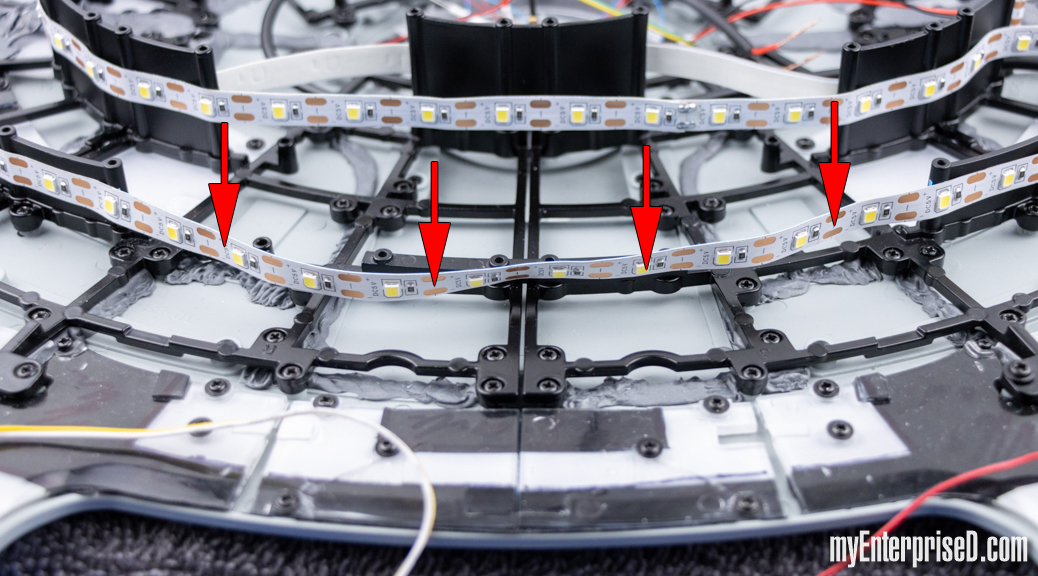 Then, I ran the LED Strip all the way around the outside of the smaller Skeletal Supports until I reached my starting point: 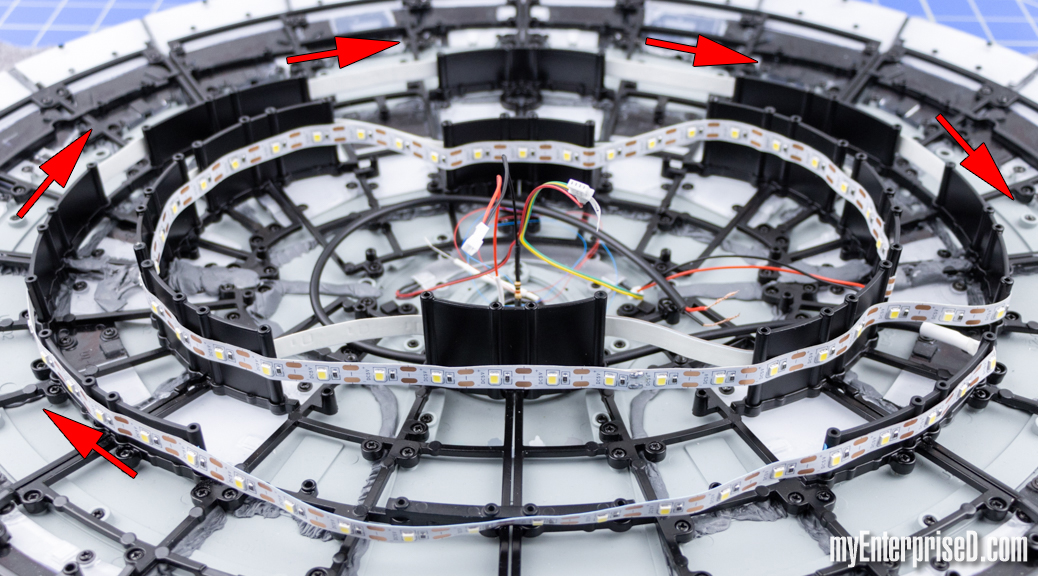 Next, I routed the LED Strip inward towards the larger Skeletal Supports: 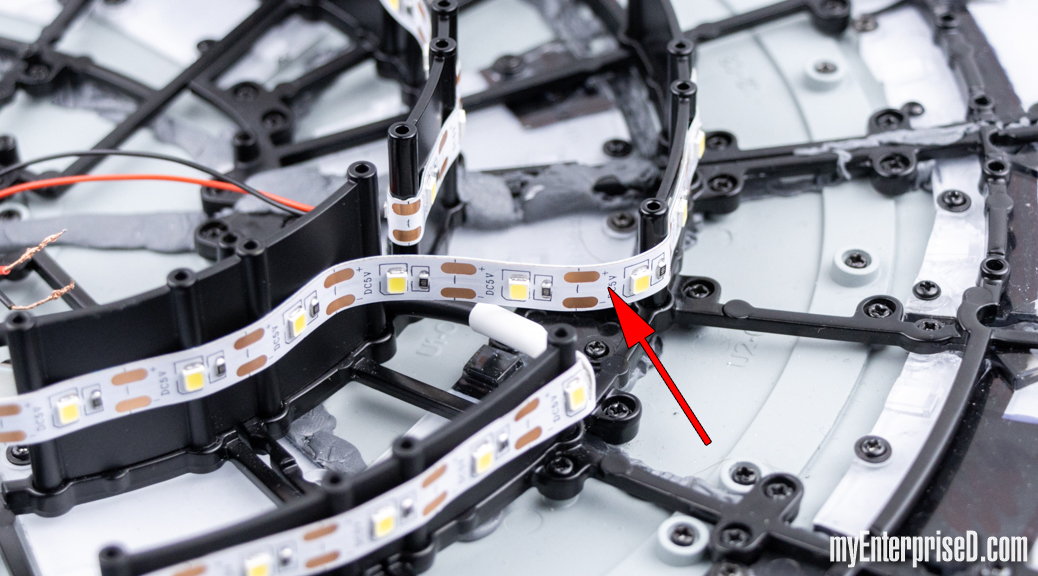 In the same way as before, I secured the LED Strip around the outer surface of the larger Skeletal Supports: 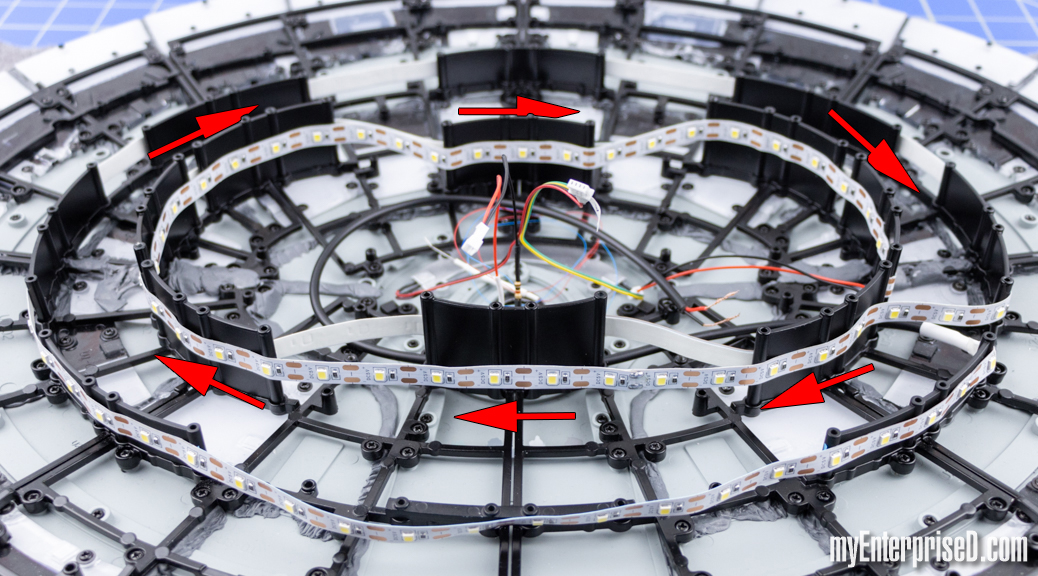 Once I made it all the way around again, I folded the LED Strip back on itself so it could be attached to the inner surfaces of the same Skeletal Supports and light the center of the Saucer: 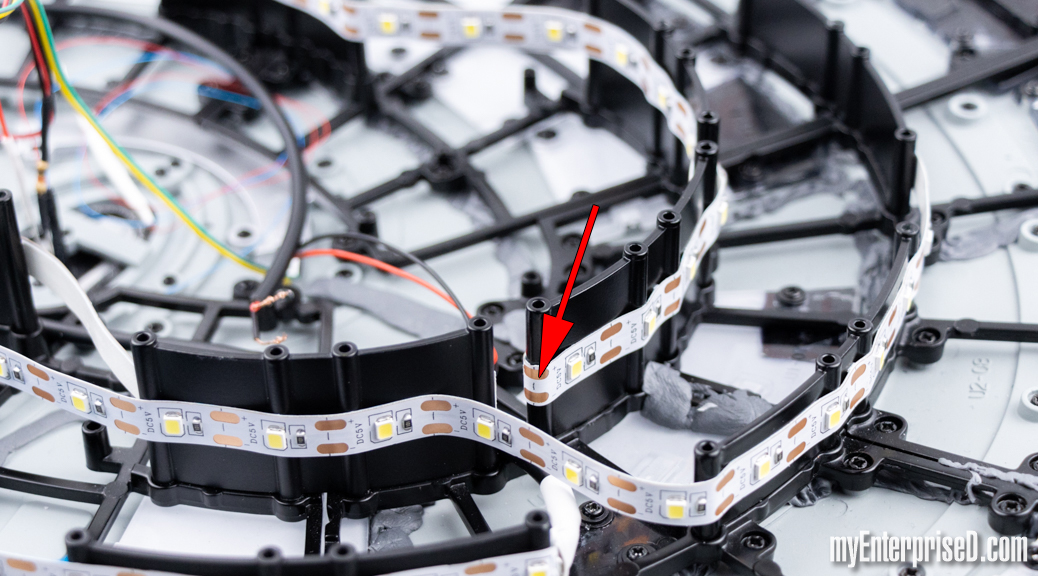 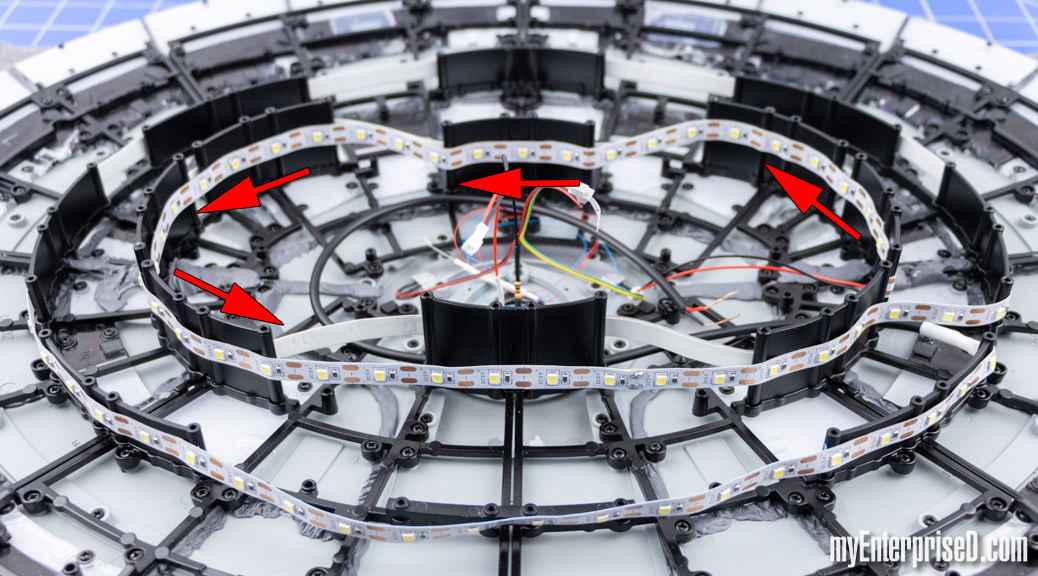 To keep things neater at the front end of the saucer, I also pressed the adhesive of these two sections of LED Strip together: 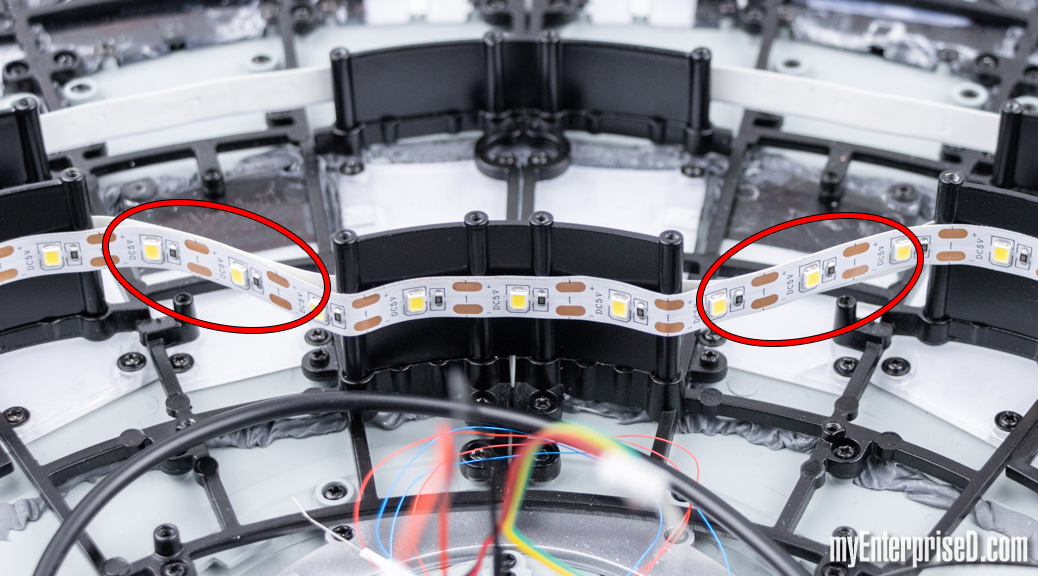 I was not able to cover the entire saucer with a single LED Strip, so I grabbed the second LED Strip and soldered it to the end of the first one with short wires. I covered these short wires in liquid electrical tape to allow for flexibility at this joint: 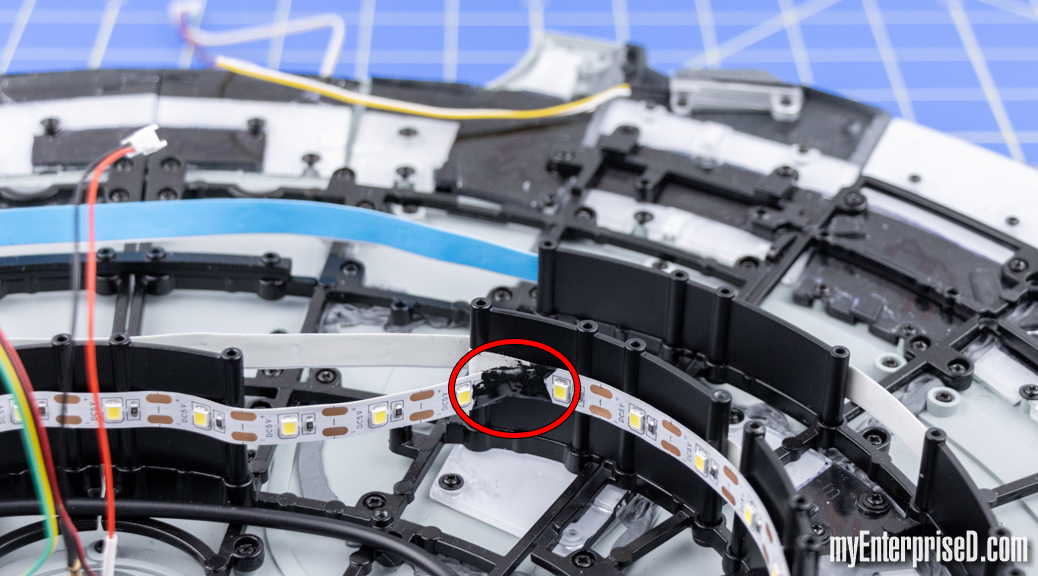 I could then finish securing this last 7.5″ of extra LED Strip to the inside of the Skeletal Supports. I cut off any extra LED Strip once I completed this inner ‘circle’ of the Saucer (at the stop symbol below): 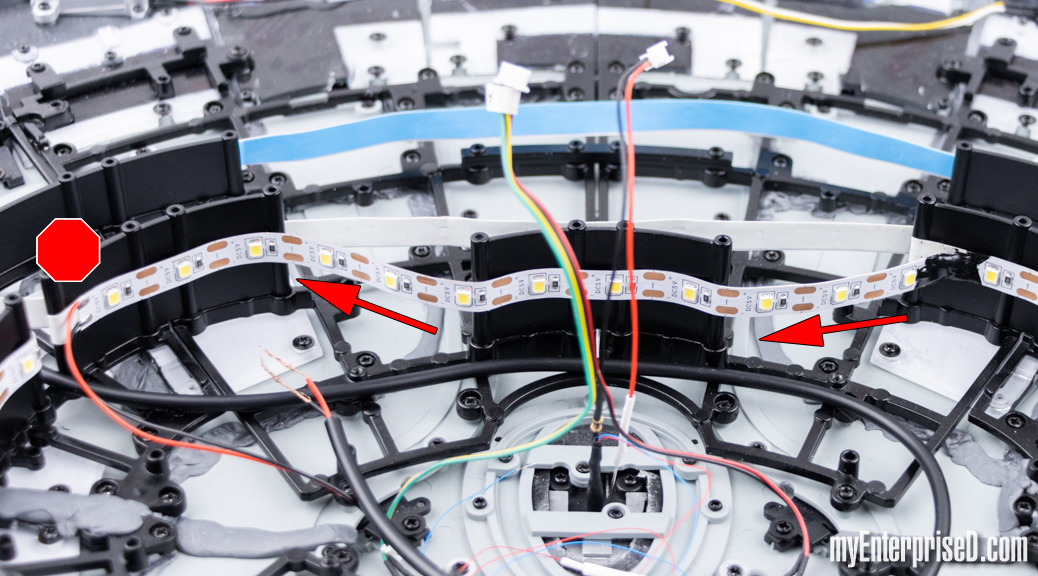 My new Nav Beacon Light was installed back in my Bridge article, but we still needed to hookup the Bridge Window lights to the LED Strip.

At the end of the LED Strip, I soldered a pre-wired 2-Pin JST PH female connector plug. This will attach to the mating connector you can see coming up out of the Bridge in the pictures above. The connector runs to a 2x3x4mm Warm White LED with an inline 1KΩ resistor that I used to dim and warm the color of the rear Observation Lounge windows. I ended up removing the forward LED from the Bridge assembly as the LED Strip will shine up into those windows/bridge dome and keep them from spilling too much light out onto the upper Saucer hull: 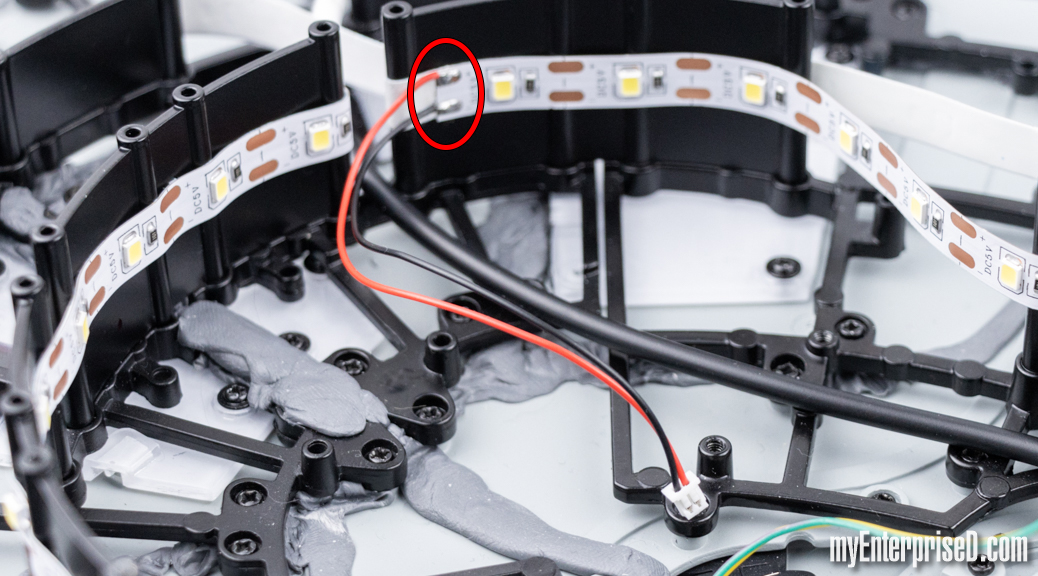 I re-used the stock LEDs from the Deck Two lights by creating an extension wire from a pre-wired 4-pin JST PH plug with 150Ω resistors inline to each LED (circled below). The leads of this extension were then connected to each other – positive to positive, negative to negative: 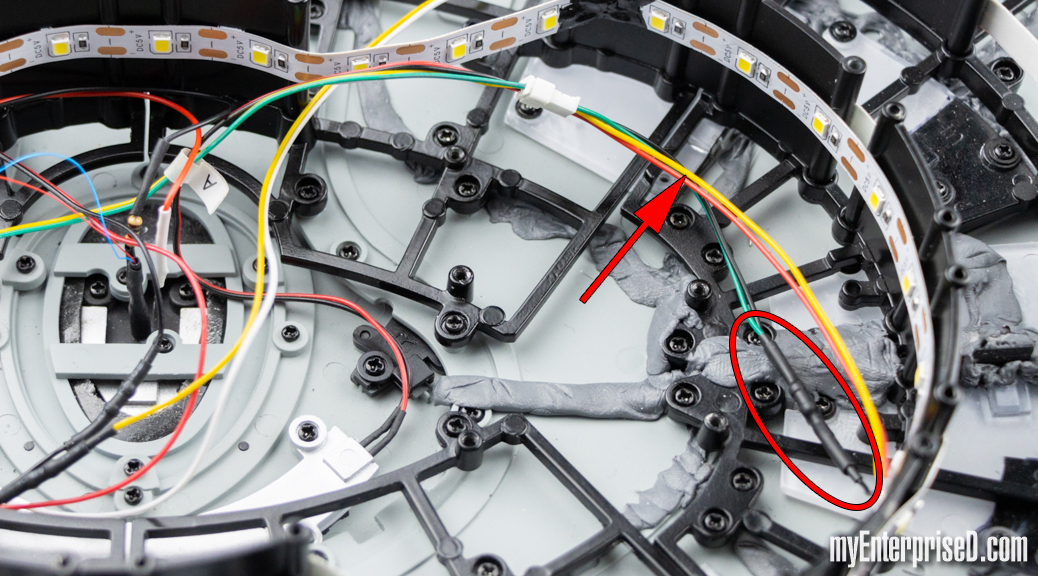 These wires were then soldered directly to the positive and negative copper contacts of the nearby LED Strip, as shown: 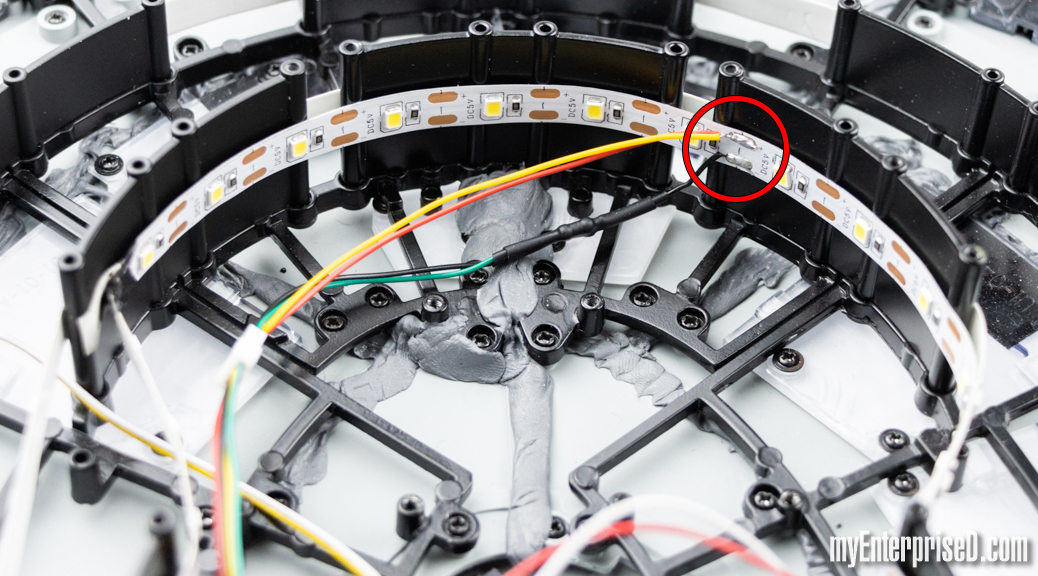 I never liked how the stock white LEDs looked inside the Saucer’s Impulse Engines. So, I took the original wires and replaced the stock LEDs with red 2x3x4mm Square LEDs (found on eBay) and inline 220Ω resistors. I used higher resistance values than normal here to keep this circuit’s total current draw under 30mA (each Arduino output pin can deliver at most 40mA max, but I didn’t want to push it). These wires were then run through the skeleton back to the Impulse Engine housings and the LEDs secured into the stock locations. Again, the matching positive/negative leads of these two wires were soldered together to single points.

TIP: To help diffuse the LED light inside these Impulse Engines, I pulled some cotton off a cotton swab and tucked it inside each housing. I also sealed the back of the Impulse Engines with black electrical tape to keep them from leaking any light into the nearby windows: 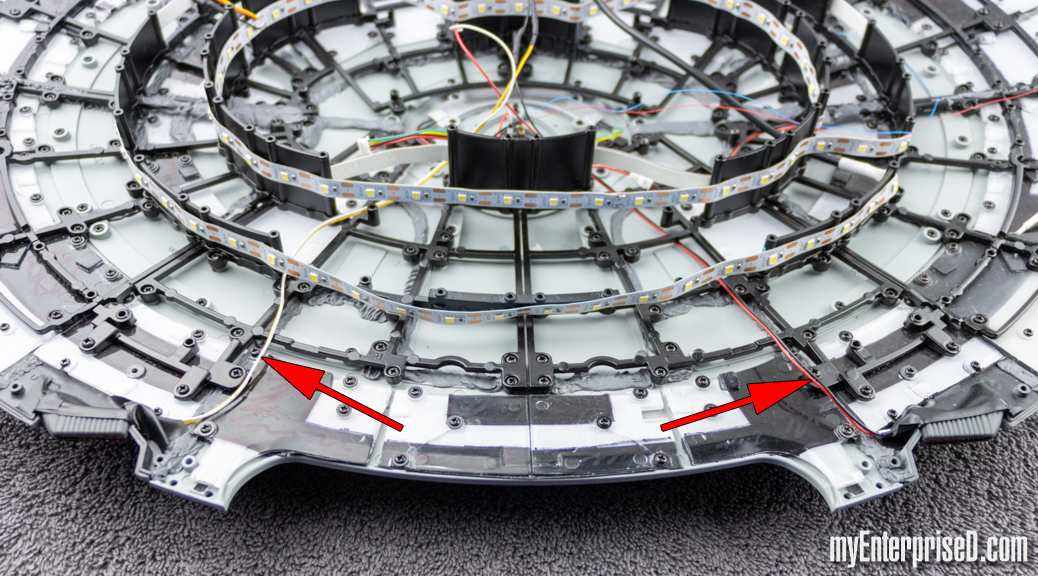 The wires from the Impulse Engine LEDs were also matched and connected together. The resistors on the ground (-) wires are visible here: 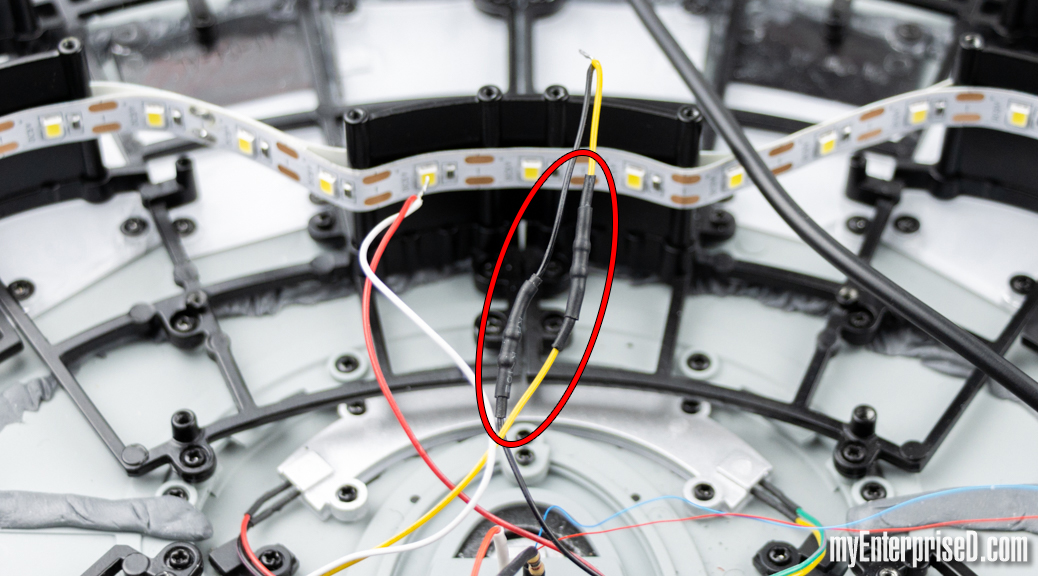 Since I only want the Saucer’s Rear Formation Lights to come on when the two sections are separated, I made a new circuit for these two LEDs. Again, I used some leftover stock wiring with new red and green 2x3x4mm Square LEDs . Similar to the Formation Lights on top of the Battle Section Neck, I put a 150Ω resistor inline with the red LED and a 330Ω resistor inline with the green LED to keep the brightness of the two LEDs about the same. These wires were then run through the skeleton back to their appropriate locations (arrows below) and the matching positive/negative leads soldered together to single points.

TIP: You may notice that I used small pieces of colored electrical tape to identify each group of wires so I could tell which was which. For example here, the orange tape is the Impulse Engine LEDs and the green tape is the Rear Formation LEDs. You can also see how I tried to keep things organized by bundling groups of similar wires together with small pieces of electrical tape or heat-shrink tubing: 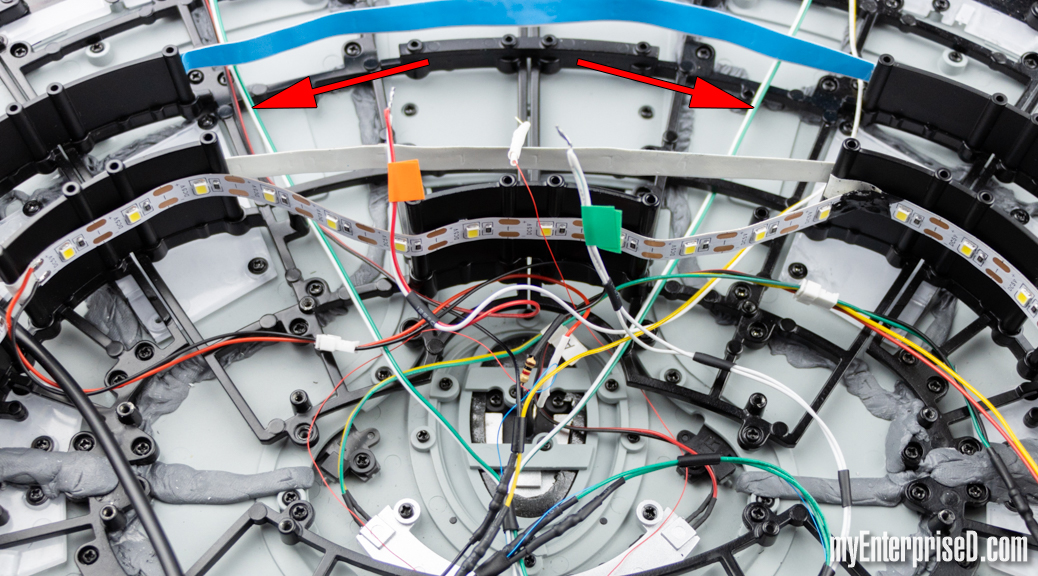 Next, I collected the ground (negative -) wires of the Impulse Engines, Rear Formation Lights, and my custom Nav Beacon, and soldered them all together: 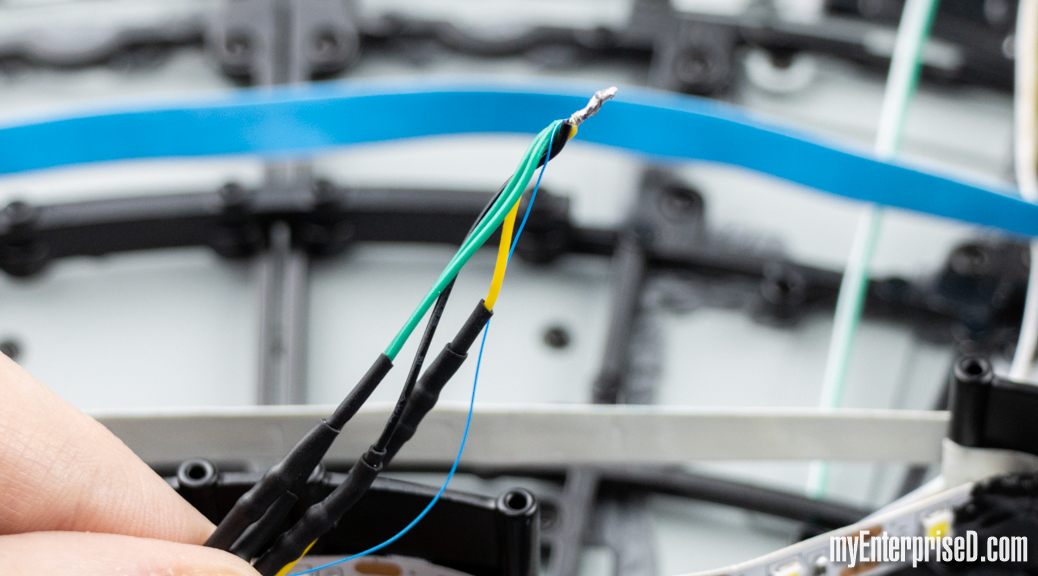 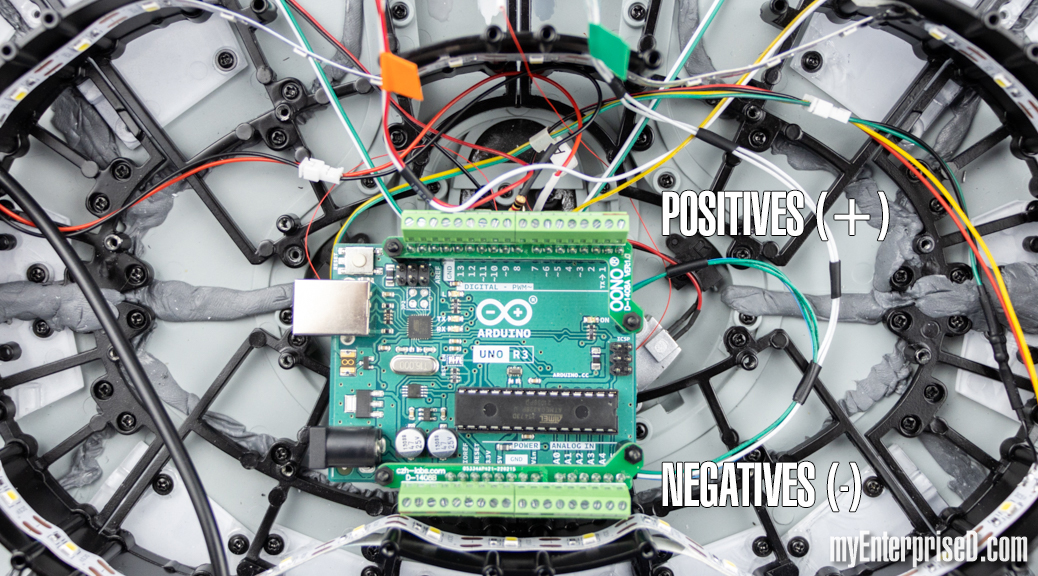 The remaining forward and side Formation Lights were also placed on their own circuit. We attached a new red, warm white, and green 2x3x4mm Square LEDs to three long lengths of the leftover stock wiring. It is better to use longer wire than you think you need, it can always be cut shorter.

Similar to the Deck Two Lights above, each LED had an inline resistor added. To keep these LEDs at about the same brightness, and to keep the total circuit current draw under 30 mA, I tested different resistor values and ended up using these: 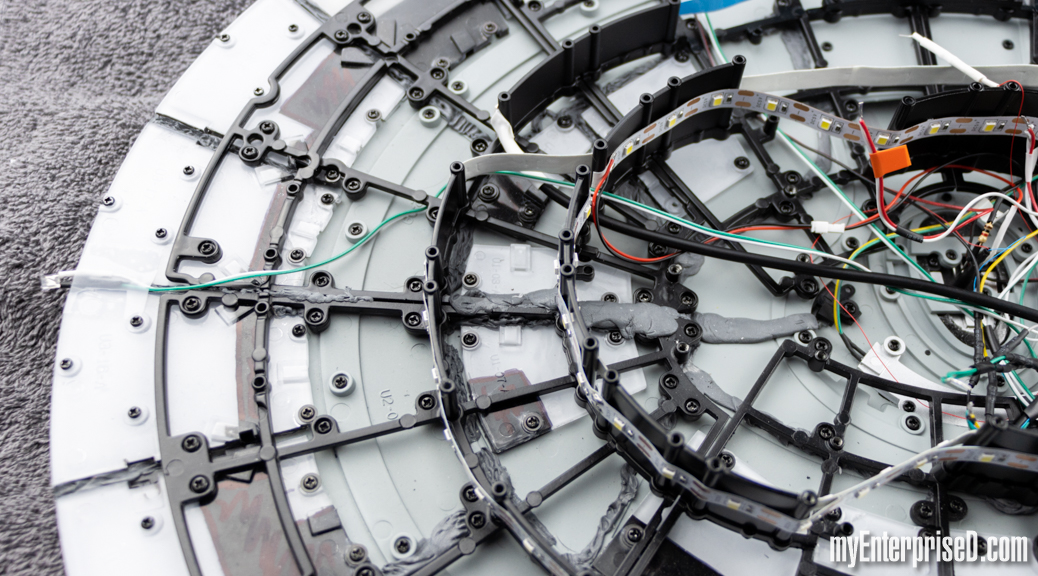 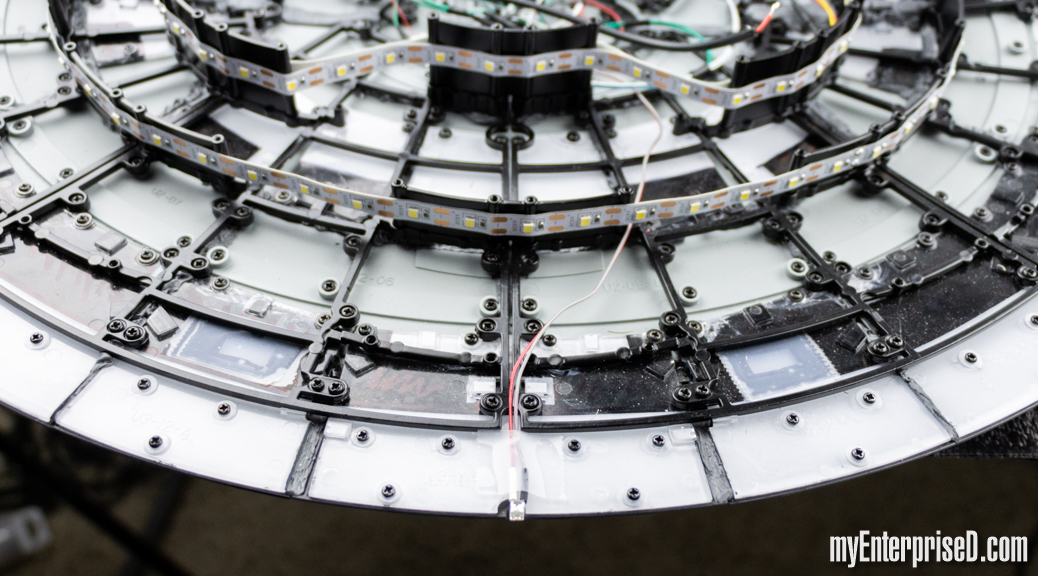 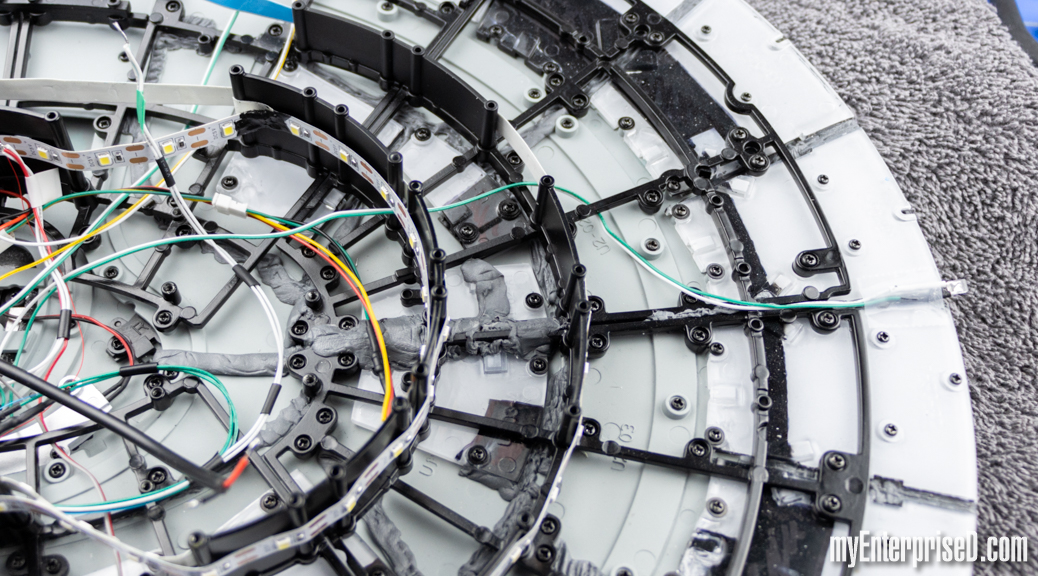 These wires were run through the skeleton to the correct edge points of the saucer, then all of the matching positive/negative leads from these wires were brought together and soldered to single connection points. I used white electrical tape to identify these wires: 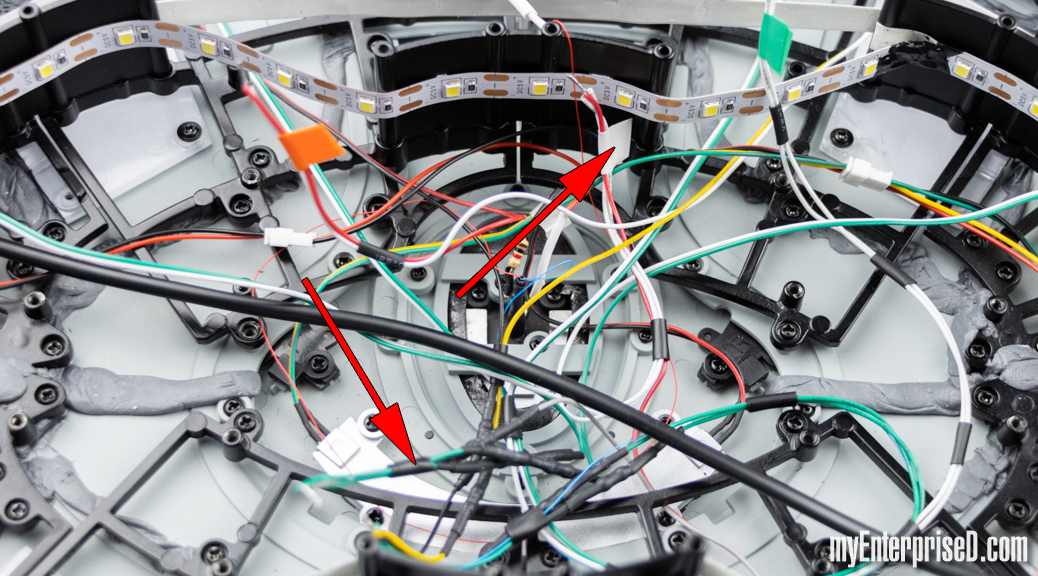 I did a quick test by powering all of the LEDs with 5V to see if the lights were working correctly, but I did not hook up the LED Strip here. Looking good so far! In the next two articles, I will go into how I designed the custom mounts for the Saucer electronics and finished up the Saucer wiring: