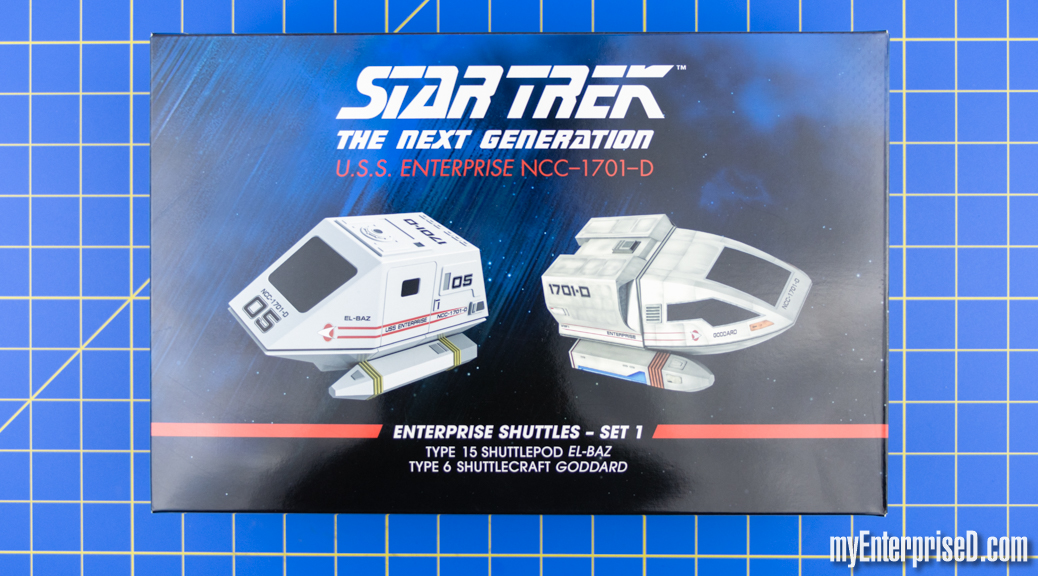 Throughout the subscription build of their 1:900 scale U.S.S. Enterprise NCC-1701-D model, Eaglemoss offered various ‘Special Issues’. An opt-out email was typically sent in advance, but these specials were automatically sent and were billed in addition to the monthly subscription if no action was taken.

The first of these Special Issues is this Enterprise Shuttles – Set 1. This is a boxed set containing two large-scale replica models of shuttlecraft as seen in the Star Trek: The Next Generation universe. Each shuttlecraft model is about 5″ long (12.7 cm) and includes: 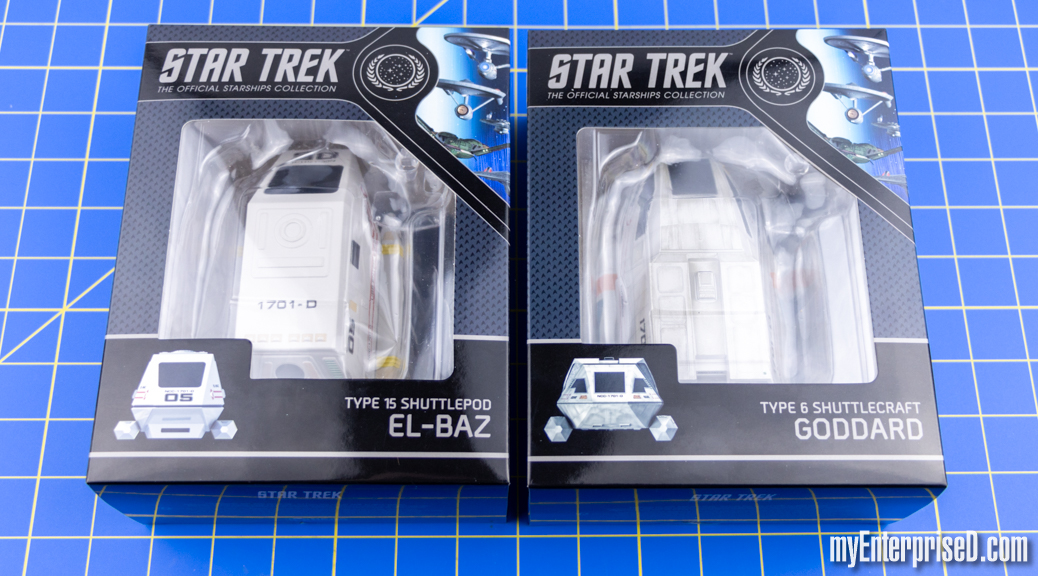 “The Type 15 shuttlepod was one of a number of small, short-range, sub-light shuttlecraft, which made up the complement of ancillary vehicles found on Galazy-class, Nebula-class, and Renaissance-class starships.” 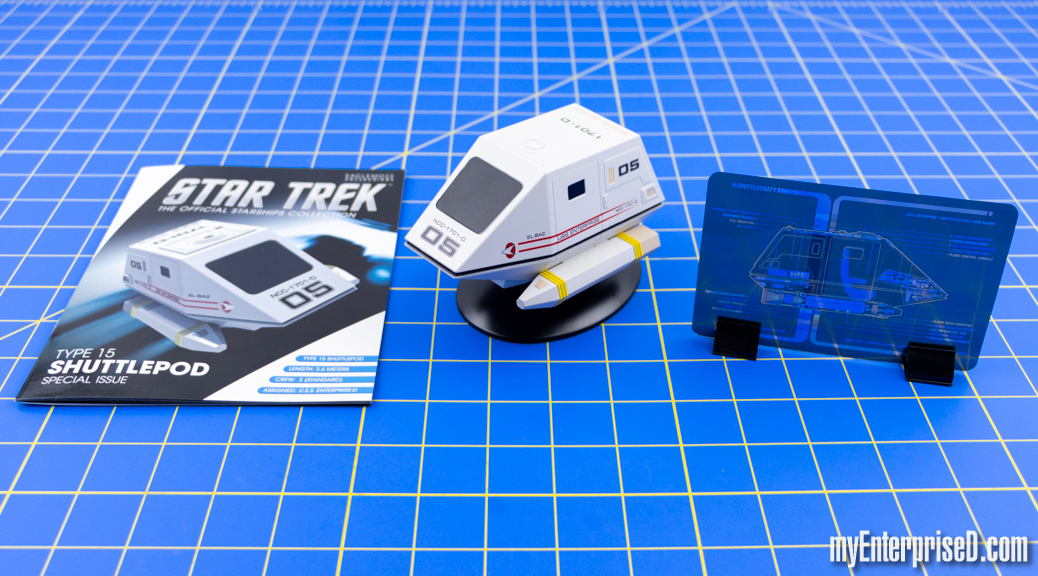 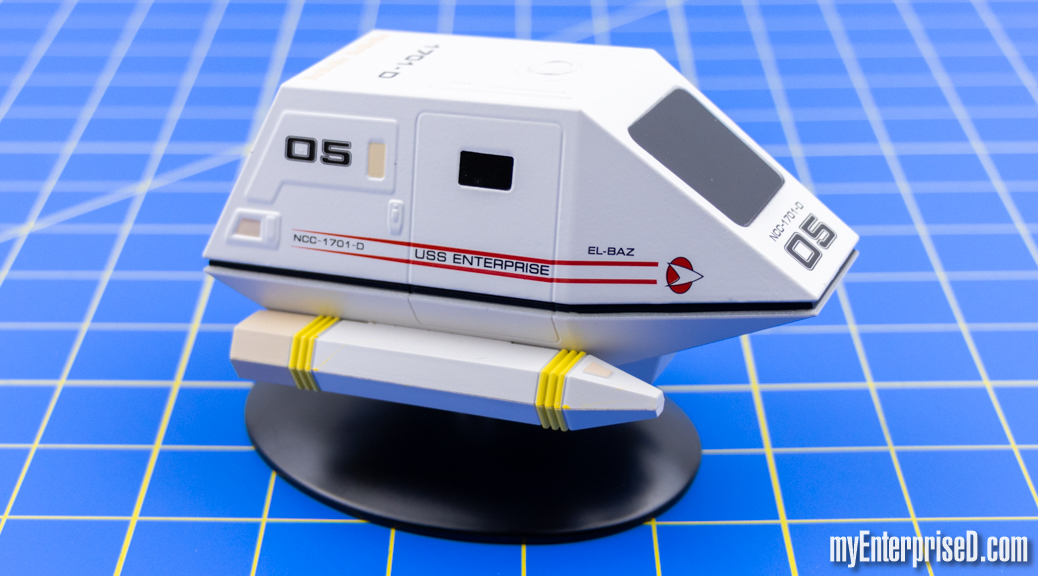 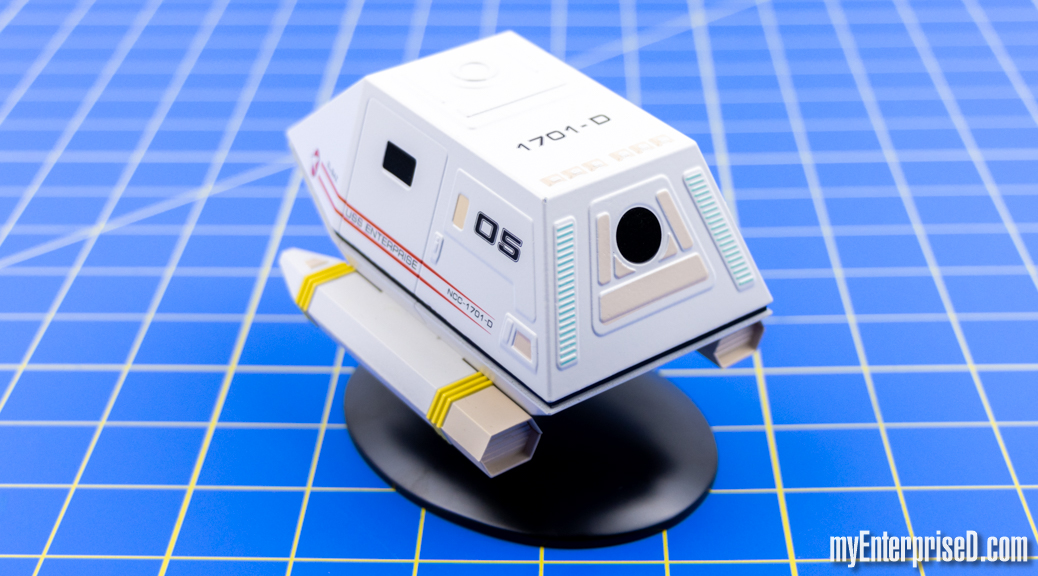 I cut a piece of white printer paper to the same shape as the plastic Okudagram card and placed it behind it. It is not a huge difference, but it does make it a bit easier to read: 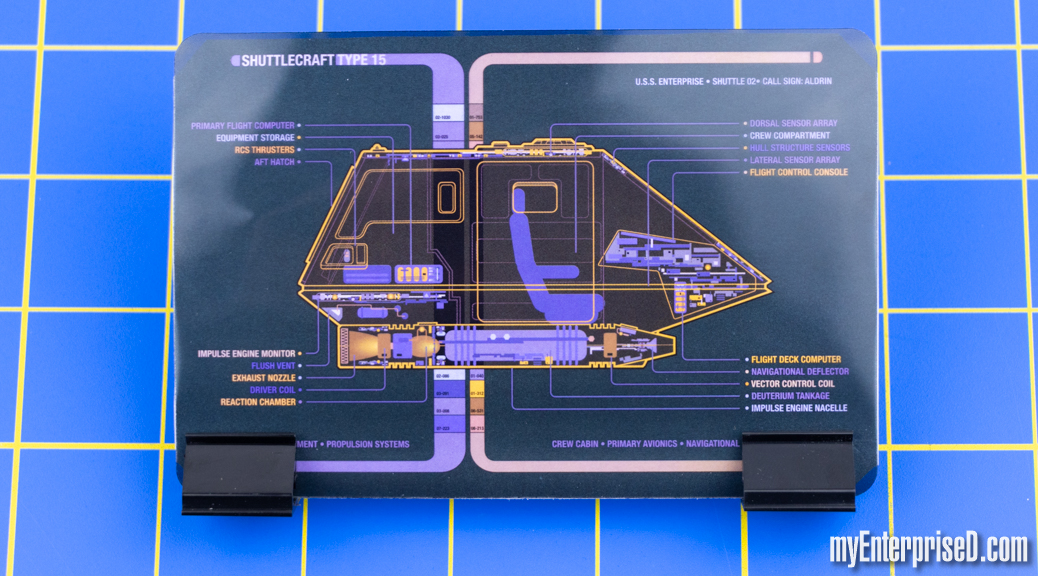 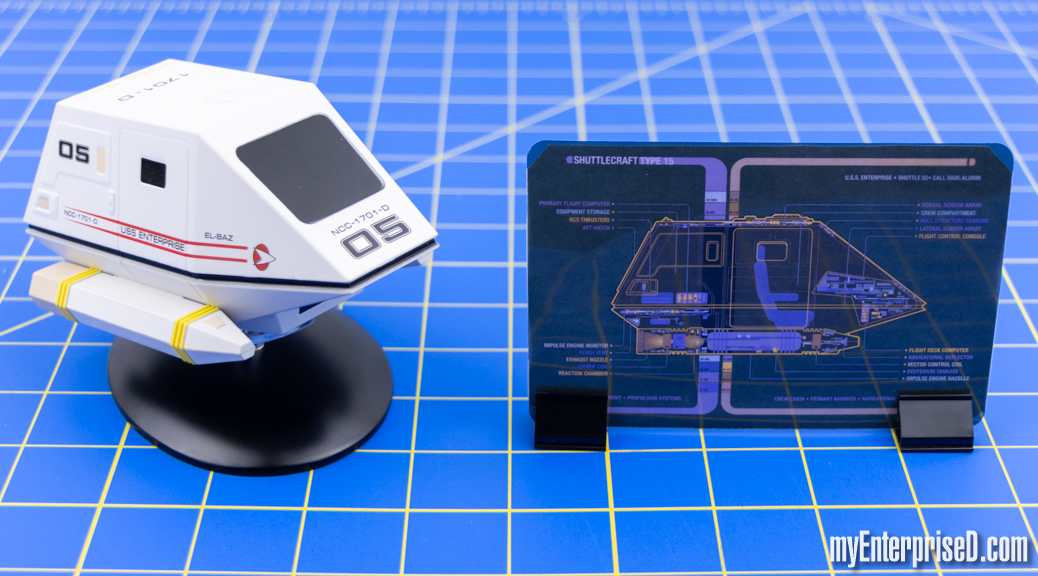 “The Type 6 shuttle was one of seven different designs of shuttlecraft or shuttlepod that were assigned to the U.S.S. Enterprise NCC-1701-D. It was classified as a personnel shuttle and was exactly six meters long.” 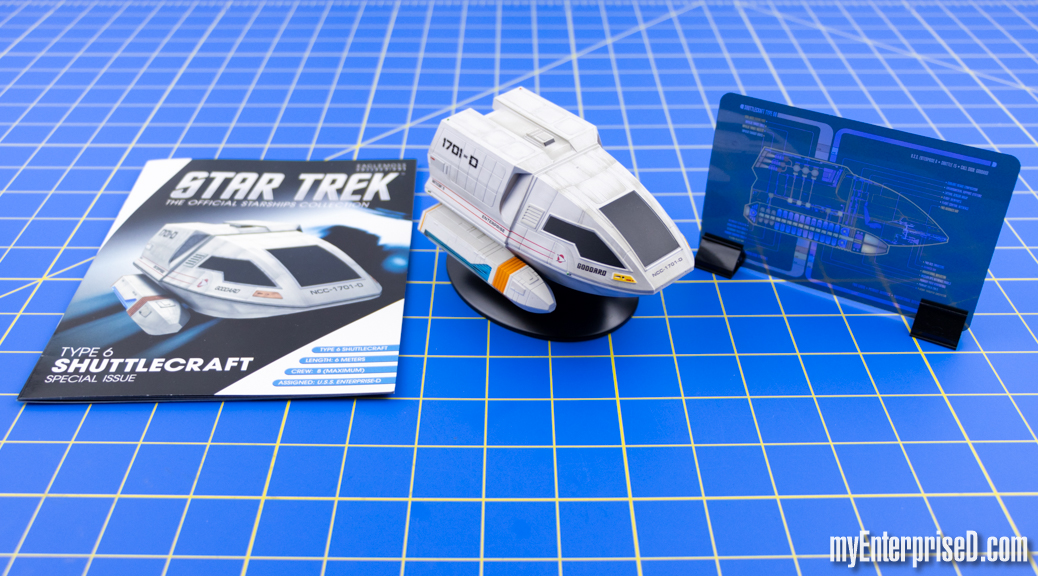 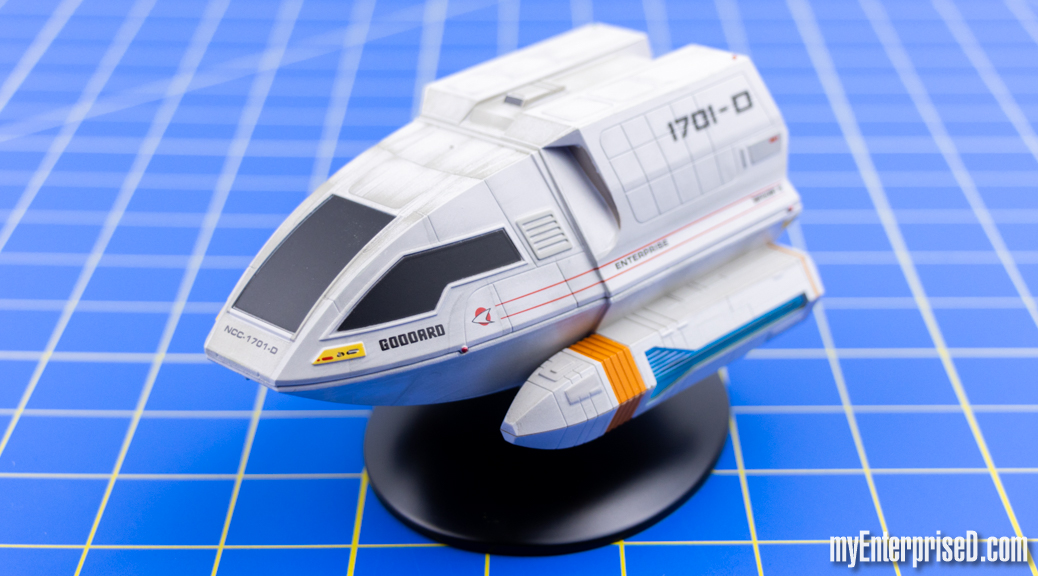 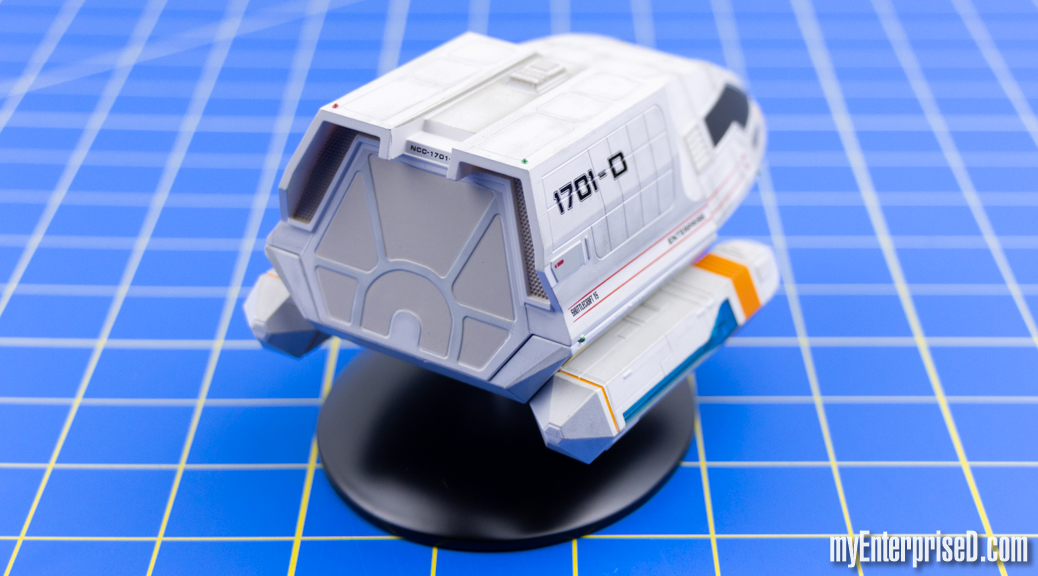 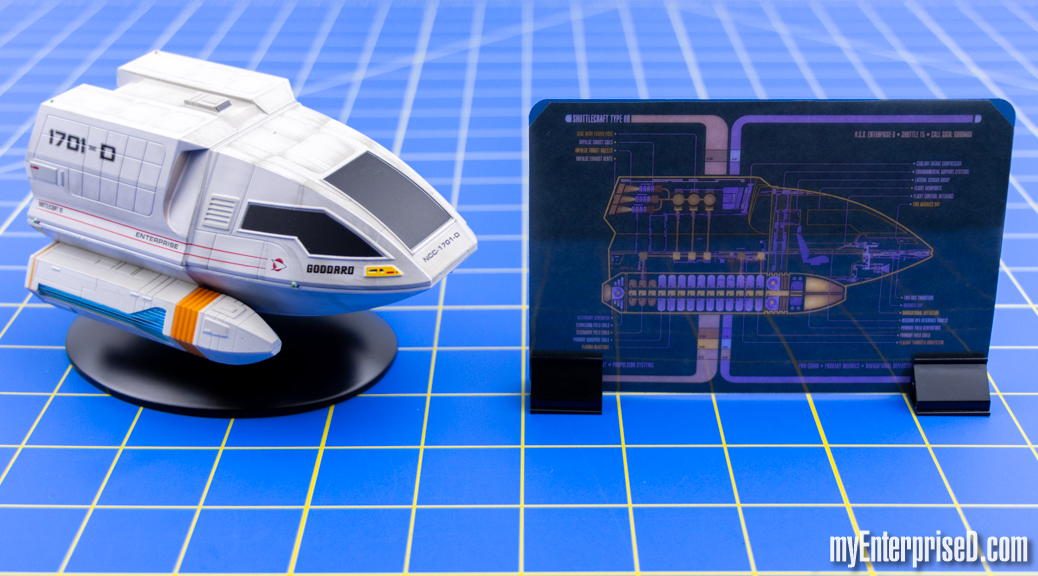 These shuttles cost me $60 USD including shipping, but are actually quite detailed. They are also larger than the most of the ships you receive as part of the separate Eaglemoss Star Trek Official Starfleet Collection subscription. As for materials, they are not quite die-cast metal, but more of a heavy resin with clear paintwork and printed-on details. The Goddard also has some really nice weathering on it, but the El-Baz is very clean. I do like the small Okudagram placards, but they would surely benefit from some backlighting.

My only small gripe is in regards to the display stands. They are just a simple flat base that does not connect to, or fit into, the shuttlecraft in any way (like most of the Starfleet Collection bases do). Since the shuttles just sit on top of them they could easily be knocked off, so take care when positioning these in your collection: 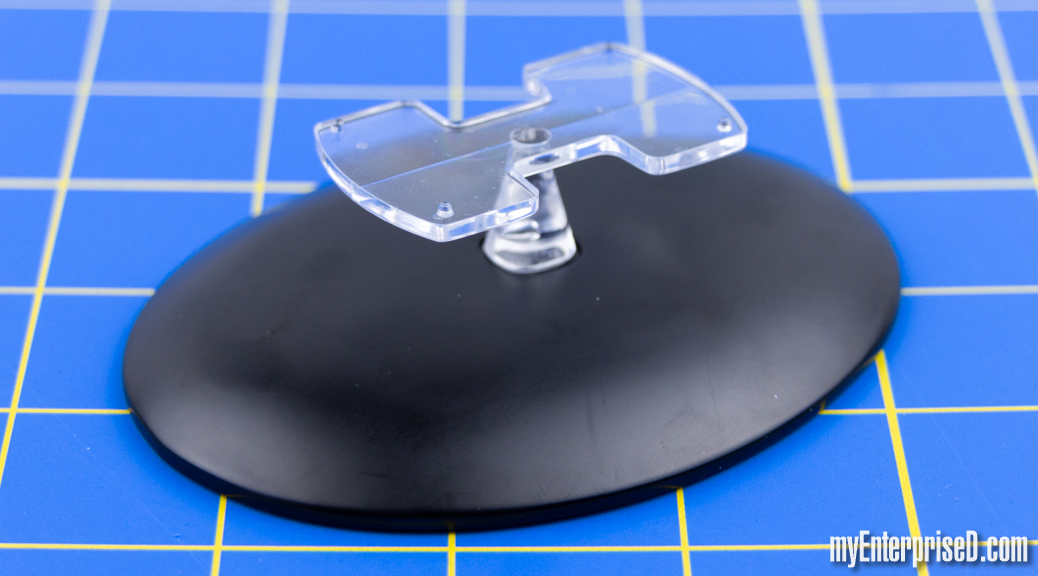 All in all, I am enjoying these larger shuttlecraft models and I look forward to the next Special Issue shuttles. I have heard that it might be the Enterprise Shuttles – Set 2 including the Type 6 Hawking and the Captain’s Yacht Calypso. Very exciting!